Optogenetics enables the remote control of neuronal activity by light. This is accomplished by channelrhodopsins, light-sensitive molecular switches, which are integrated into the neurons by adeno-associated viruses (AAVs)as gene ferries. AAVs are convenient and safe for gene therapy. Channelrhodopsins are light-gated channels, which open upon photonic stimulation. The influx of positively charged ions through channelrhodopsins leads to neuron’s firing. 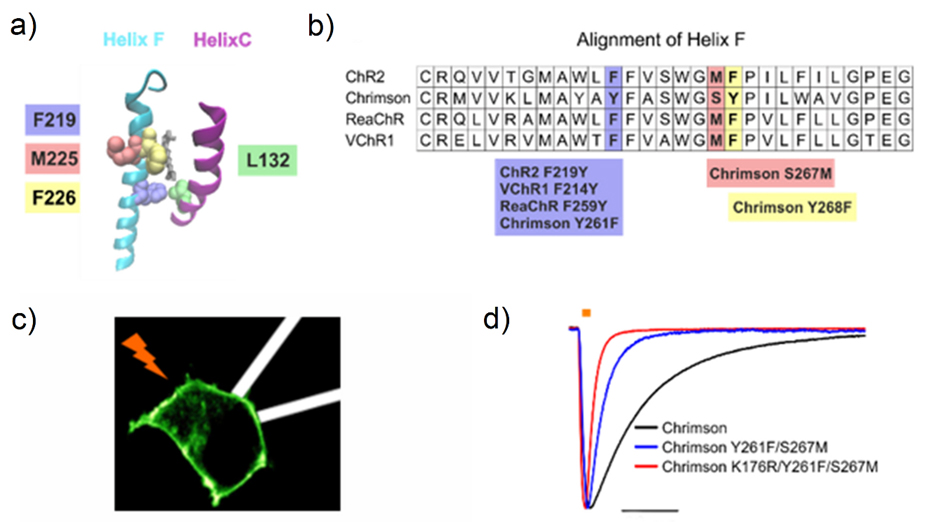 Optogenetic approaches brought numerous new insights in neurosciences and promise future medical applications, including improved hearing restoration. In the healthy inner ear, the snail-shaped cochlea contains a coil of sensory inner hair cells connected to sensory neurons. Each of these sensory units code for one sound frequency – which is perceived as pitch – much like the keys of a piano, thus giving rise to a place-frequency code. However, >5% of the world’s population suffer from disabling hearing loss, mostly resulting from dysfunction or loss of hair cells. For decades now, deaf people have benefited from electrical cochlear implants (eCI, Fig. 2A), smart devices that endow most patients with the ability to understand speech. To achieve this, eCIs use the place-frequency code by stimulating the auditory neurons with an array of 12-24 electrodes placed at increasing depth inside the cochlea. However, poor frequency resolution of artificial sound coding remains a major bottleneck of eCIs. It arises from the spread of electrical current around each electrode inside the cochlea, which activates numerous neurons– hampering speech understanding when background noise is present as well as music perception. Hence, given that light can be conveniently confined in space, switching from electrical to optical stimulation of the optogenetically-modified auditory nerve promises a greater spatial resolution by activating smaller groups of neurons, thus improving frequency resolution (e.g. Dieter et al., Nat Commun 2019).

Proof-of-principle on this matter exists since 2014, but in order to apply optical CIs (oCI, Fig. 2B) to humans, the approach requires further development: channelrhodopsins need to confer high light-sensitivity to the neurons and enable them to follow optical stimulation reliably for rates of up to hundreds per second. Likewise, potential damage by light (phototoxicity) needs to be avoided and since red light is far less toxic than blue light, red light-activated channelrhodopsins should be preferentially used.

However, red light-activated switches have been too slow for the temporally-precise control of auditory signaling. The speed of the molecular switches is governed by protonation reactions that act as a clock of the gating of channelrhodopsins. Based on structural and spectroscopical studies, we performed site-directed mutagenesis to speed up the open-to-closed transition. This way, we accelerated numerous channelrhodopsins, which allows rapid photoactivation over the whole range of the visible spectrum (Fig. 1). Red light-activated Chrimson variants, closing up to ten times faster than the original, are of particular interest.

In turn, we expressed a fast Chrimson mutant (f-Chrimson) in auditory neurons in mice and subsequently stimulated their auditory nerve with acutely implanted optical fibers. By reading-out gross neuronal activation along the auditory pathway, we found that f-Chrimson elicited fast and the most light-sensitive optogenetic responses achieved to date in the auditory nerve (Fig. 2C, E). Then, we zoomed in on the activity of individual neurons and observed that most of them followed stimulation at near-natural firing rates with high temporal precision. Furthermore, we tested a separate group of mice at 9 months of age, when the strain used manifests an evident age-related hearing deficit, and found that optical stimulation largely restored auditory activity (Fig. 2D-F). 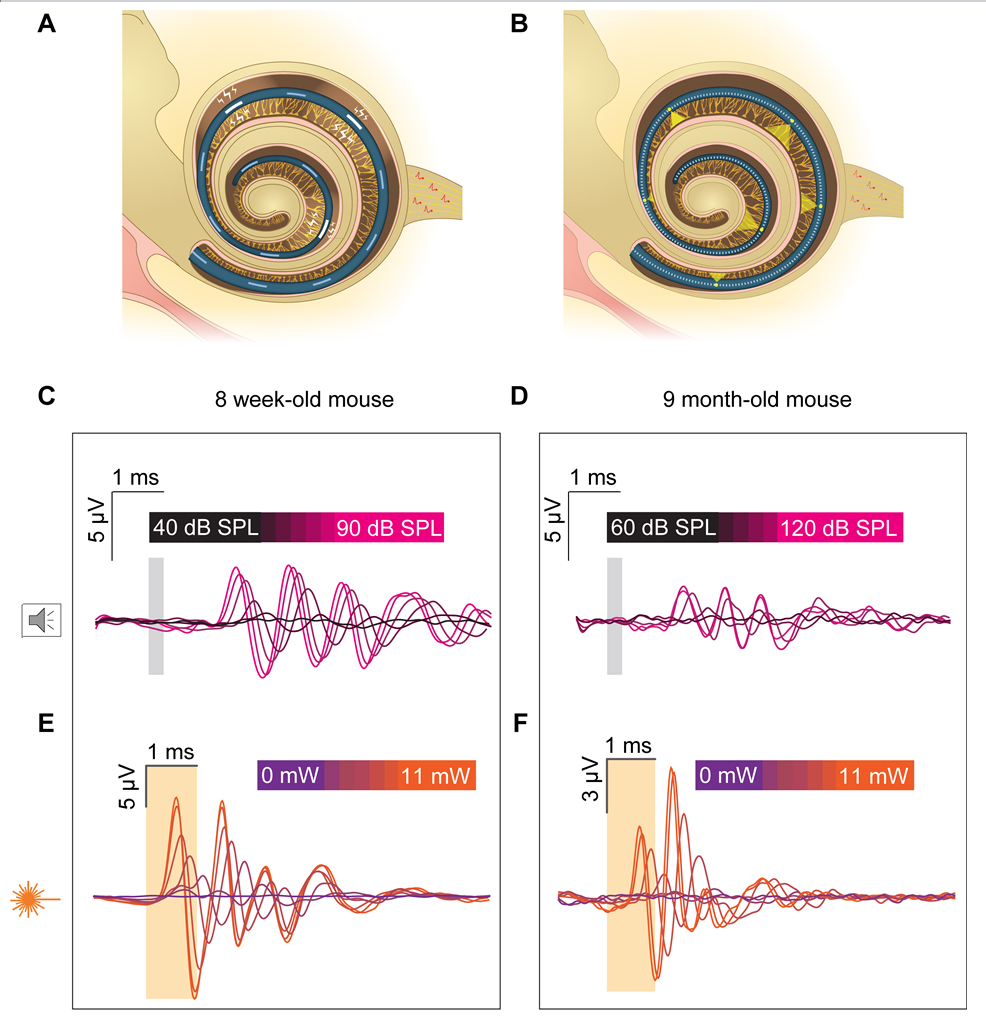 Fig. 2. Artificial stimulation of the cochlea. Schematic of the cochlea implanted with a current electrical cochlear implant (eCI; A) and a future optical cochlear implant (oCI; B) where several electrodes/light emitters are activated (white and orange, respectively). Comparative readout of gross neuronal activity in the auditory pathway upon acoustical stimulation (C, D) and optogenetic stimulation (E, F) in young (C, E) and aged mice (D, F). Amplitude of peaks and valleys relate to the number of active neurons. Note the lower sound intensities required to trigger measurable activity and the broader response amplitude found in young (C) compared to old mice (D), while this age-related difference is not as evident when using light as a stimulus (E, F).

Certainly, these results advance the oCI based on cochlear optogenetics as a future clinical alternative to current eCIs, since they show that red light can be used at low illumination for restoring auditory sensation in the long term and in subjects with a hearing deficit.