Endothelium is a thin layer of cells, which covers the inner surface of blood vessels and has a key role in the maintenance of vascular and metabolic homeostasis. Its functions include regulation of vascular tone, inhibition of platelet aggregation and blood coagulation, and modulation of the inflammatory response.

A dysfunctional endothelium may directly contribute to atherosclerosis, thus being a risk factor for cardiovascular diseases, a leading cause of death in the world. It is not completely understood how endothelial dysfunction develops, but many studies have shown that hyperglycaemia, in diabetic subjects, is closely related to endothelial dysfunction. Among the mechanisms through which hyperglycaemia may induce cell damage there is the disproportionate activation of the hexosamine biosynthesis pathway (HBP). HBP normally metabolizes a small amount of glucose entering the cell, but in condition of hyperglycaemia, its activity is enhanced and there is an increase of its final product, N-acetylglucosamine. It has been demonstrated that N-acetylglucosamine is involved in the altered regulation of many proteins; this effect may be due to the addition of N-acetylglucosamine to proteins (O-GlcNAcylation) or, as more recent research suggests, to N-acetylglucosamine ability to promote the accumulation of unfolded proteins in the endoplasmic reticulum (ER), the intracellular organelle responsible of protein synthesis and folding. It is known that a disproportionate accumulation of unfolded proteins in the ER may elicit the unfolded protein response (UPR), with the initial purpose to restore normal ER function; however, in condition of prolonged ER stress UPR may lead towards apoptosis, a form of programmed cell death. 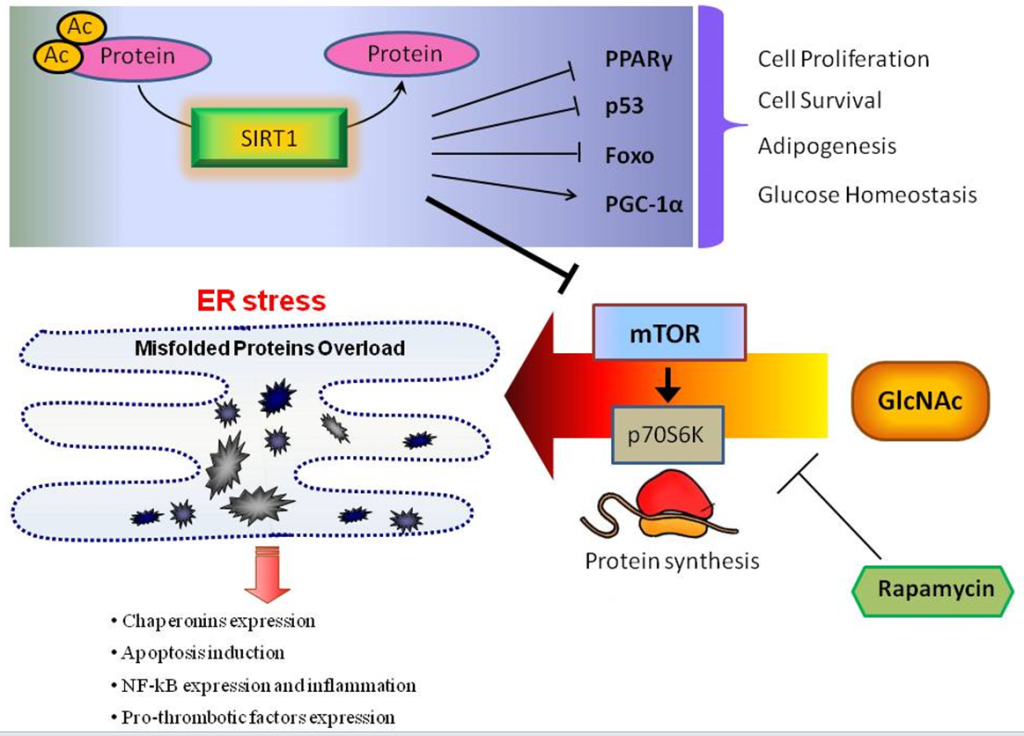 We hypothesized that hyperglycaemia-induced activation of HBP could impair endothelial function, by inducing ER stress rather than through increased protein O-GlcNAcylation. To test this hypothesis, we used human umbilical vein endothelial cells (HUVECs) and treated them with glucosamine, to mimic the effects of chronic hyperglycaemia. Glucosamine-treated cells showed an increase in several ER stress markers levels, such as Bip, CHOP and IRE1α. Bip expression was not affected when we inhibited O-GlcNAcylation, or increased it blocking OGlcNase, an enzyme that removes glucosamine from proteins, thus confirming that glucosamine ability to induce ER stress is not mediated by O-GlcNAcylation.

We then focused our attention on the effect of glucosamine on endothelial function. We demonstrated that glucosamine-treated cells were characterized by increased level or activity of apoptosis markers, such as c-PARP and caspase 3, and activation of pro-inflammatory pathways, with increased Jnk phosphorylation, NF-kB activity, TNF-α and CRP expression, and IL-6 release. Furthermore, we observed increased levels of pro-thrombotic factors, such as PAI-1, ICAM-1 andVCAM-1. These changes were abolished or significantly reduced if ER stress induction was blocked through its inhibitor phenyl butyric acid (PBA), thus confirming the role of ER stress in glucosamine-related endothelial dysfunction.

Finally, we assessed the possibility of attenuating ER stress response using SRT1720, a chemical compound that has been shown to activate the Sirtuin 1 (SIRT1) pathway. When SRT1720 was added to glucosamine-treated cells, a reduction of ER stress, apoptosis, pro-inflammatory and pro-coagulant markers was observed. It was also observed that glucosamine negatively affected SIRT1 expression, while the addition of SRT1720 resulted in an increased SIRT1 activity, thus confirming

SRT1720 ability to modulate SIRT1 pathway. It has been suggested that SIRT1 activation may reduce ER protein overload, by inhibiting mTOR-dependent protein synthesis. To test this hypothesis, we blocked mTOR activity through its inhibitor Rapamycin and observed both a decreased phosphorylation of mTOR substrate p70S6K1 and a reduction of Bip expression. In conclusion, we clarified how hyperglycaemia induces endothelial dysfunction and showed that SRT1720 counteracts ER stress response, hampering glucosamine-induced cell damage. Our data may lead to new possible therapeutic approaches to endothelial dysfunction and atherosclerosis.