After discovery of phagocytosis by Elie Metchnikoff in 1882, it has become an axiom that in human body white blood cells (leukocytes) are the main cells that engulf and destroy bacteria and other pathogens. But until recently, there has been no concise explanation of how bacteria are cleared from the bloodstream. Available data do not support the idea that leukocytes are able to engulf bacteria in the bloodstream.

Leukocytes cannot recognize or engulf bacteria in flowing blood because all cells are moving very quickly. For phagocytic leukocytes, the average time required for bacterial engulfment has been observed to be at least 15 minutes. Leukocytes cannot clear bacteria from the bloodstream also because of their scant availability, short life span, and vulnerability. 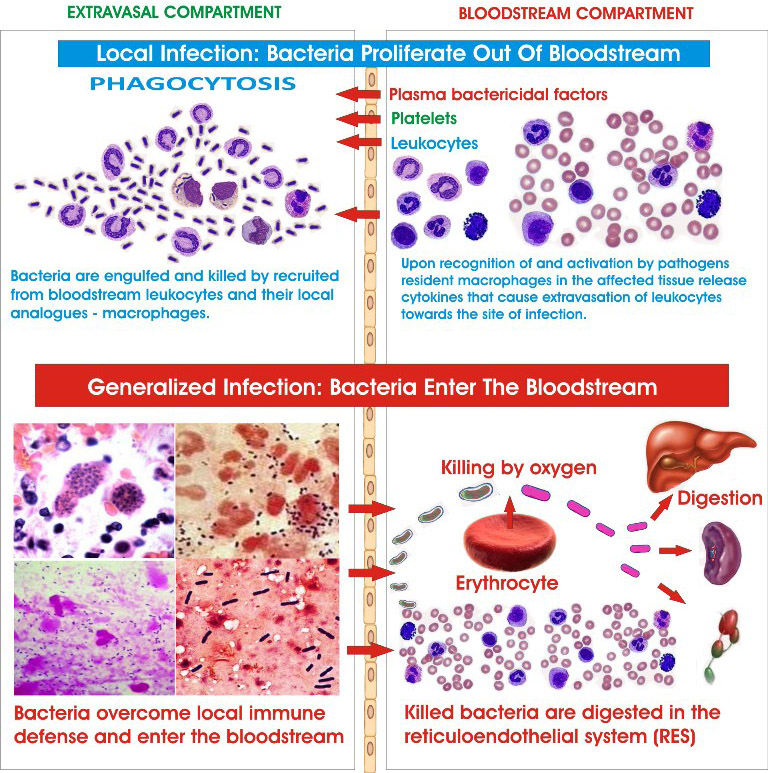 Bacteria travel quickly in the blood flow, and special mechanisms are needed to catch and kill them. Recently it has been found, that erythrocytes are the only cells that possess such mechanisms. The latter are electric and chemical phenomena.  Charge interaction provides attraction and fixation of bacteria on the surface of the erythrocyte. The release of oxygen kills bacteria by oxidation. Bacteria can survive oxidation producing catalase (that neutralizes active oxygen) and polysaccharide capsule with slime layer (that prevent oxygen contact with bacterial body).

As they move through the blood, erythrocytes become triboelectrically charged. The charging is determined by the unique physical and mechanical properties of the erythrocyte’s membrane (density, elasticity, deformability, flexibility, frictional resistance, etc.) and the erythrocyte’s biconcave shape. Quickly travelling in the blood flow, bacteria also become triboelectically charged. As soon as a bacterium comes close enough to an erythrocyte, electric charges interact, pulling and fixing the bacterium onto the surface of the erythrocyte. Charge interaction simultaneously causes the release of oxygen from oxyhemoglobin. The oxygen immediately oxidizes and kills the bacterium. The dead bacterium loses triboelectric charge and its own membrane charge (zeta potential), and, as a result, the attraction forces become weak and the bacterium is washed into the plasma. Killing bacteria, erythrocytes cannot decompose and digest them owing to the absence of appropriate intracellular structures and enzymes. Dead bacteria are digested in the reticuloendothelial system (RES), particularly in the liver and the spleen.

Mechanisms and pathways for the clearance of bacteria from blood circulation in health and disease.
Minasyan H
Pathophysiology. 2016 Jun