Colon forms the important part of large intestine located after caecum. Compared to other regions of gastrointestinal tract (GIT), movement of material through colon is slow. Therefore a dosage form taken orally could take from as less as 4 hours to as long as 12 hours to arrive at colon. Colonic transit time can vary from 12 to 30 hours. Colon supports large population of microbes. Bacteria residing in colon are natural inhabitant and non pathogenic. Functions of colon include of absorption of nutrients, manufacture of certain vitamins by microorganisms and Formation of faeces and their expulsion. 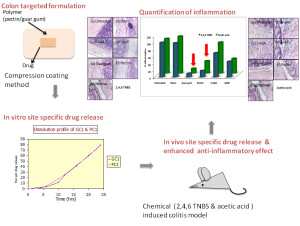 Colon is affected by Inflammatory Bowel Diseases (IBD) like Ulcerative Colitis and Crohn’s disease. In these diseases colonic mucosa is highly inflammed leading to bloody diarrhoea, fever, weight loss, pain, vomiting. Drugs prescribed for Mesalazine (5-Amino Salicylic acid), Corticosteroids and in severe cases Immunosupressants, Cyclosporine. Such drugs when taken orally as conventional non specific dosage forms, may prove to be ineffective because they will be available in suboptimal quantity at the colon to show any promising therapeutic effect. Moreover they could also show potential side effects if they get absorbed through the upper GIT, stomach and small intestine and reach the blood.
To avoid these drawbacks it is beneficial to design colon specific, targeted dosage form that would release drug contents exclusively in colon leading to localization of therapeutic effect.

In case of IBD one prominent feature observed is aggregation of neutrophils and activation of enzyme myeloperoxidase MPO. MPO is specific marker for neutrophils determination and used to estimate the level of inflammation in colon, determine efficacy of drugs used in IBD or study specificity of dosage forms to be used for colonic targeting of anti-inflammatory drugs. 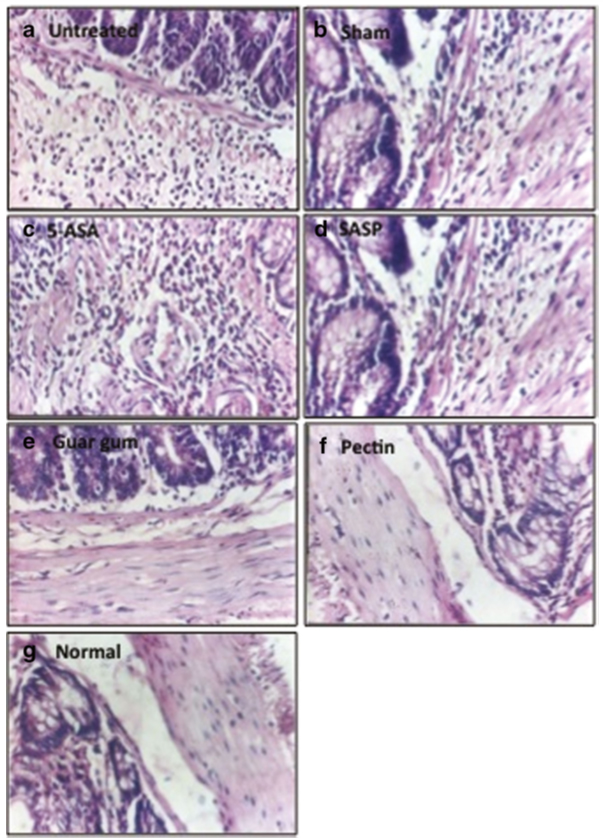 Prodrug is inactive moiety which gets enzymatically metabolized to therapeutically active moiety. Colonic prodrug sulfasalazine (SASP) is unabsorbed in upper GIT, exclusively gets metabolized in colon to give 5-ASA, active portion of SASP by enzyme azoreductase secreted by colonic microflora. However when given orally, plain 5-ASA is absorbed in upper GIT and not made available in colon.

However, results of in vitro tests had to be confirmed by in vivo study studies on experimental animal models that would provide the “proof of concept.” and confirm that formulation will be effective in humans.

Colonic specificity of 5-ASA tablets of guar gum and pectin was evaluated using chemically (2,4,6 trinitrobenzenesulphonic acid and acetic acid) induced colitis rat model. Both colon specific 5-ASA formulations were observed to be more effective in reducing inflammation in chemically induced colitis rat models when compared to colon specific prodrug SASP and conventional 5 ASA administered orally. Because in both these formulations there was less neutrophils aggregation, MPO activity than SASP and conventional 5-ASA.