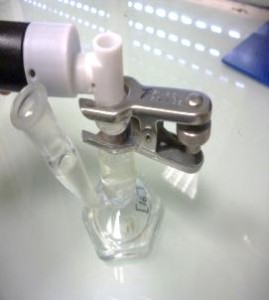 Enrofloxacin is an antibiotic from the fluoroquinolone family used to cure several infections. This antibiotic inhibits DNA replication required for bacterial growth. It is against a wide range of bacteria, including those resistant to other antibiotics. Enrofloxacin is the first fluoroquinolone developed for veterinary application. This antibiotic family is available in several oral and parenteral formulations. Therefore, in this study, percutaneous administration was successful because it has some advantages such as: (i) it avoids the first metabolism of a drug, (ii) it reduces the side effects associated with systemic toxicity, (iii) it provides an alternative where the oral dosing is not possible and (iv) it easily removes the drug in case of severe local or systemic adverse reactions.

The objective of this study was to investigate the percutaneous absorption of enrofloxacin from two base formulations: Pentravan® cream and LMOG (low molecular-mass organic gelator) organogel to find the most efficient medication between the two of them. Pentravan® cream is an oil-in-water emulsion with liposomal technology: liposome is a spherical vesicle with lipid bilayer composed of phospholipids which makes it possible to cross biological membranes. It provides, at least, a good physical stability for drug delivery. Recently, organogels have been considered as an alternative system for transdermal applications. They are semi-solid systems, in which an organic liquid phase is immobilized by a three dimensional network composed of self-assembled, intertwined gelator fibers of LMOG. The organogel was obtained from isopropyl myristate and oleic acid as oil phase and 12-hydroxystearic acid (HSA) as LMOG. 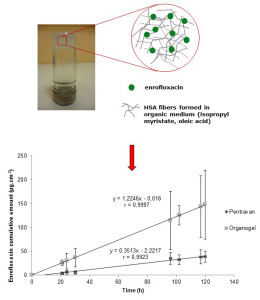 In this study, ex-vivo pig ear’s skin that matched typical in-vivo conditions was used. A donate dose of formulation was applied to the outer surface of skin and drug absorption was measured by monitoring its rate of appearance in the dermal receptor solution bathing the inner surface of the skin thanks to Franz diffusion cells.

The rate of enrofloxacin in diffusion samples was analyzed by HPLC (High Performance Liquid Chromatography) which is an analytic separation method. Each formulation was investigated with 3 Franz cells: control, Pentravan® cream and organogel. The cutaneous damage was studied by TEWL (TransEpidermal Water Loss) parameter. As a result, there is no difference among these.  After 120 hours, enrofloxacin in organogel based on isopropyl myristate, oleic acid and HSA could absorb through pig ear skin 3.7 times greater than Pentravan® suggesting more effective treatment by enrofloxacin contained in LMOG organogel.

Thanks to the presence of oleic acid and isopropyl myristate in the formulation, enrofloxacin from the organogel could be absorbed better through the porcine skin than that contained into the Pentravan® cream. This showed that LMOG organogel was an effective vehicle for drug absorption. The release of a drug from a topical pharmaceutical preparation can be effectively influenced by the vehicle in which it is applied.