In order to proliferate all organisms need to replicate their genomes. In most, this is achieved by a process named DNA replication by which a parental DNA gives rise to two faithful copies of itself. For this to occur however, a key step in this process, ie. the initiation step must be activated. The replicon model proposed more than fifty years ago, provided a practical framework for a molecular understanding of this crucial step. According to this model, and in its most basic configuration, a replicon is defined as a DNA segment whose duplication depends on the interplay of a replicator (a DNA sequence, now named an origin of replication or Ori), and an activator (a protein or proteins) whose function is to recognize the Ori site, and to facilitate the recruitment of the replication machinery to this site.

In most simple organisms, such as, bacteria and viruses their genomes are constituted by a single replicon. Therefore the binding of an activator protein to the Ori site is sufficient to initiate the duplication of their genomes. It is becoming clear that the interaction of Ori and activator constitute the specie’s replication signature: the interaction is specific and unique for each species. This suggests that these two elements must have evolutionary co-evolved to prevent the accidental replication of foreign DNA, and that their exquisite interplay determines the species-specificity of the initiation step, and of the duplication of the genome as a whole. It is therefore not surprising that in the simplest biological systems providing just these two elements, and by hijacking host proteins required for DNA, RNA and protein synthesis, viruses can ensure their specific propagation.

Given these considerations one could hypothesize that the presence of ectopic copies of a viral Ori region could compete with the natural Ori site at the viral genome for the binding of the activator, resulting in an arrest of viral replication. To test our hypothesis we decided to use the bacteriophage λ infection of E.coli cells as a model system.

Initiation of replication of λ DNA is dependent on the presence of a specific DNA sequence at the origin of replication, λOri, and of two phage proteins encoded by the genes O and P, since mutants defective in any of these elements fail to replicate in a detectable way. However, only the O protein interacts with λOri. We tested if an ectopic λOri, contained in a multicopy recombinant plasmid could interfere with this interaction during a normal λ infection. By measuring the effect on the host growth, viral production, and electron microscopic visualization of the resulting λ replicative intermediates, we concluded that the ectopic copies had prevented the normal initiation step of λ DNA replication.

The inability of the infecting phage particles to proliferate in bacteria harboring ectopic copies of the viral Ori is illustrated in Figure 1 where about 1000 particles of phage λ were used to infect a naïve bacteria (left panel) or the same but containing ectopic λOri copies (right panel). It is evident that while the titer on the naive bacteria was as expected, no viral plaques were observed on the plate containing bacteria harboring the ectopic copies, indicating that viral proliferation had been arrested. 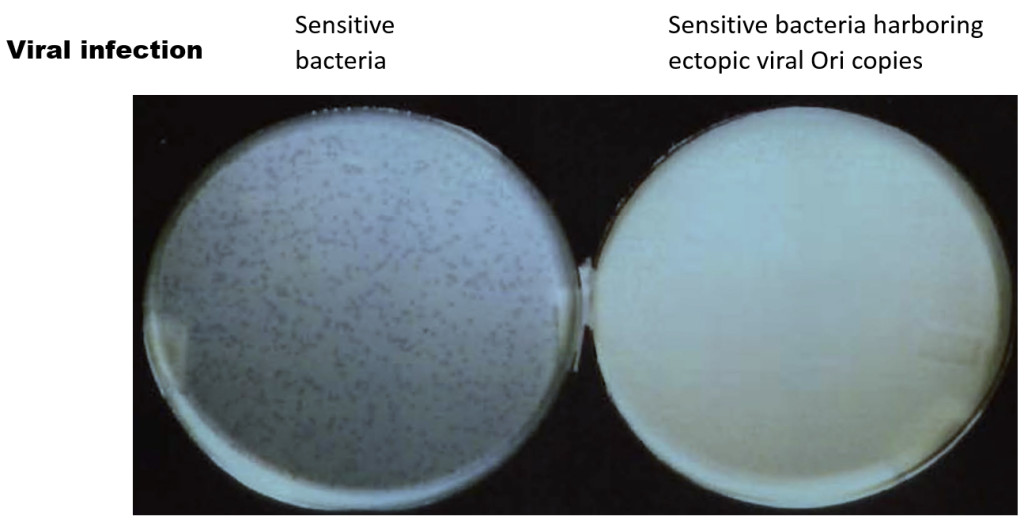 In summary, our studies have exploited the exquisite interaction between an origin of DNA replication and its cognate activator to demonstrate that this interaction can constitute a potential viral ‘Achilles heel’ which can be targeted in viral eradication programs in diseases of human importance. It has also not escaped our attention, that the strategy we have used in this study could also be applied to prevent the proliferation of viral DNA that has been integrated into the host genome. To our knowledge, this study explored a novel approach of specifically targeting the duplication of a genome by using ectopic copies of its origin of DNA replication as decoys.