Bisphenol A (BPA), is an organic chemical compound that has been widely used as a monomer in the manufacturing of polycarbonate plastics and epoxy resins, in thermal paper production and as an additive in the formation of some polyvinyl chloride plastics. BPA’ production is approximately 5 – 6 billion pounds annually. 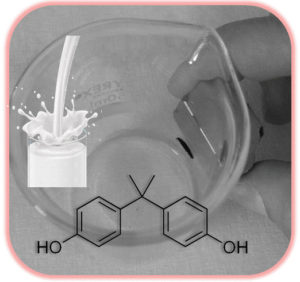 The reason that BPA is of high concern is that it can act as a potential endocrine disruptor which imitates the action of estrogen hormone. The latter regulates reproduction and development. The activity of BPA is by binding to estrogen disruptors thus interfering with the action of endogenous gonadal steroid hormones leading to abnormal differentiation of reproductive organs.

How can BPA reach the human body? Food and beverage have been identified as the major sources of BPA exposure in humans as it may migrate from interior can coating and polycarbonate containers into the food or liquids due to acidic conditions or thermal treatment in processing.

Due to its high potential health risk, regulatory authorities have taken into action several limits, as for example the European Union (EU) which has set a limit of migration at 600 μg kg-1 for BPA in food. Moreover European Directive 2011/8/EU, prohibits within the EU the manufacture of polycarbonate infant-feeding bottles containing BPA, and prevents the importation of such products. The United States Food and Drug Administration (FDA) has banned the use of BPA in baby bottles and sippy cups since 2012. Recently, in 2015 the European Food Safety Authority (EFSA) has established a Tolerable Daily Intake (TDI) of 4 micrograms/kilogram body weight (µg/kg bw).

The choice of an appropriate sorbent material is very crucial for the efficient extraction of BPA. Activated carbon has been proved as an effective adsorbent for the separation and purification of gaseous and liquid phase mixtures due to its outstanding characteristics e.g. high surface area, wide range of surface functional groups and internal microporosity. Magnetic activated carbons are composite materials consisted of non- magnetic activated carbon and magnetic labels, such as magnetite (Fe3O4) and magnemite (g-Fe2O3) providing the magnetic behavior of the composite.

In our study, the impregnation of a micro – mesoporous activated carbon with magnetite nanoparticles (Fe3O4) was effectively accomplished by sonication. The prepared magnetic activated carbon was characterized and the results proved that it had the desired magnetic susceptibility and high adsorption capacity for BPA. This material was used, for the first time, as adsorbent for ultrasonic assisted magnetic solid phase extraction of BPA from cow milk and human breast milk samples for subsequent determination by HPLC- UV. The developed method was sensitive, simple, low cost for operation and environmentally friendly.