In his treatise, James Clerk Maxwell (1873) did not only derive his famous equations but he also provided the mathematical description of the direct current (DC) resistance for dilute suspensions of shelled spherical objects. At his time, Maxwell could not have been aware that the geometry of an electrically homogenous core covered by a low conductive membrane is the simplest electric model for a biological cell. After the advent of alternating current (AC) technology, Karl Willy Wagner (1914) expanded Maxwell’s description to AC, i.e. to the impedance. In the 20ies of the last century, the interpretation of impedance experiments with cell suspensions, using the then so called “Maxwell-Wagner theory”, provided the first proof for the existence of very thin, electrically insulating membranes, which surround all biological cells. 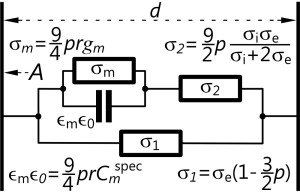 Fig. 1. RC model for the specific impedance of a suspension of spherical cells between electrodes of area A and distance d. The model’s resistors and capacitors are determined by cell radius (r), volume fraction of cells (p), specific conductivities of the internal (σi) and external (σe) media, as well as the sectoral capacitance ( ) and area specific conductance (gm) of the membrane in a complex manner.

Nowadays, impedance characterization is used for cells or colloidal objects in medical diagnostic, white Biotec, chemical analyses and in lab-on-chip systems, where microelectrodes are arranged in microfluidic channels. Most of the existing models for suspended shelled spherical and ellipsoidal objects use expansive analytical or numerical solutions, which require elaborate analyses for the extraction of cellular properties. Nevertheless, for the fast online characterization, simple characteristic equations are desirable.

It has always been obvious that impedance data of cell suspensions can very well be reproduced with resistor-capacitor (RC) models, which allow for fast parameter fits. Nevertheless, RC parameters can usually not be ascribed to physiological cell properties. In 1959, Schwan and colleagues were the first to correctly assign the cell radius and electric properties to the parameters of an RC model (Fig. 1). They obtained their expressions by simplifying the elaborate mathematical expressions of the Maxwell-Wagner theory for a spherical single shell object. 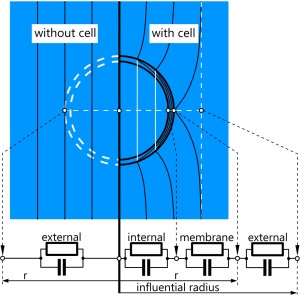 Fig. 2. Equipotential line distributions for a spherical single-shell model. Cell polarization is described by the difference of the potentials at the poles in the absence (left) and presence (right) of the cell. The internal field is constant for Maxwell’s equivalent body (full white lines). The external field distributions of cell model and equivalent body are identical. The frequency dependence of the pole potential difference obtained from the RC-model (bottom) provides the impedance.

In our new approach, we started from a complete RC model for the potential distribution in shelled ellipsoidal objects (Fig. 2). The model relies on Maxwell’s notion of “equivalent bodies”, which ensures constant electric fields inside each of the ellipsoidal interfaces of the model. We found that the potentials at the cytoplasm-membrane and membrane-external medium interfaces can be described by a reduced finite element approach with only three geometric elements for cytoplasm, membrane and external medium. While all cross sectional areas are assumed arbitrary but equal, the lengths of the cytoplasm and membrane elements are given by the cell geometry. An open question was cell shape dependence of the external element length, which ranges from the cell pole to the “influential radius”. For different shapes, we defined influential radii from the maximum possible potentials at each pole of the object. Finally, each finite element was electrically described by an RC pair (Fig. 2). This approach allows for a new perspective at cell polarization phenomena by considering the frequency dependence of the electric potentials in the system after separating the geometric and electric problems.

It is amusing that our simplifications of the expressions for the potentials apply the philosophy of ancient analog computing: to separate time constants, certain electric elements of the complete RC-chain model are neglected in the considered frequency range. We think that this philosophy is closer to the electric character of the problem than other approximations used in the literature. It allowed for deriving a series of new analytic expressions for the characteristic features of the impedance spectra of differently oriented homogeneous and single-shell objects of the general ellipsoidal shape. Possible applications are found in the identification of different cell types for cell sorting, like tumor and blood cells, flexible electronics, tactile and e‑paper displays, as well as the characterization of electrorheological fluids, which are used in hydraulic brakes and damping systems.