The endodontic field encountered an important breakthrough with the introduction of the nitinol alloy. It offers special mechanical properties like a shape memory effect and superelasticity. Despite of the particular properties of NiTi instruments, they could suffer unexpected fractures during root canal preparation. Flexural fatigue is probably the most prevalent cause of unexpected fracture encountered clinically. However, a higher prevalence of torsional fracture for multiple uses of NiTi rotary files was reported. Regardless of these remarks, it is difficult to avoid the fact that both flexural and torsional stresses occur simultaneously. To improve the resistance of NiTi files, different thermomechanical treatments have been applied to the NiTi alloy to enhance their endurance. In 2010, NiTi rotary instruments were introduced on the market made from a NiTi wire subjected to a particular proprietary thermal processing named the controlled memory (CM) technology (CM Wire; DS Dental, Johnson City, TN). Studies have shown that instruments made with the CM technology have superior flexibility and fatigue resistance in comparison with instruments made of conventional NiTi (superelastic instruments, SE). 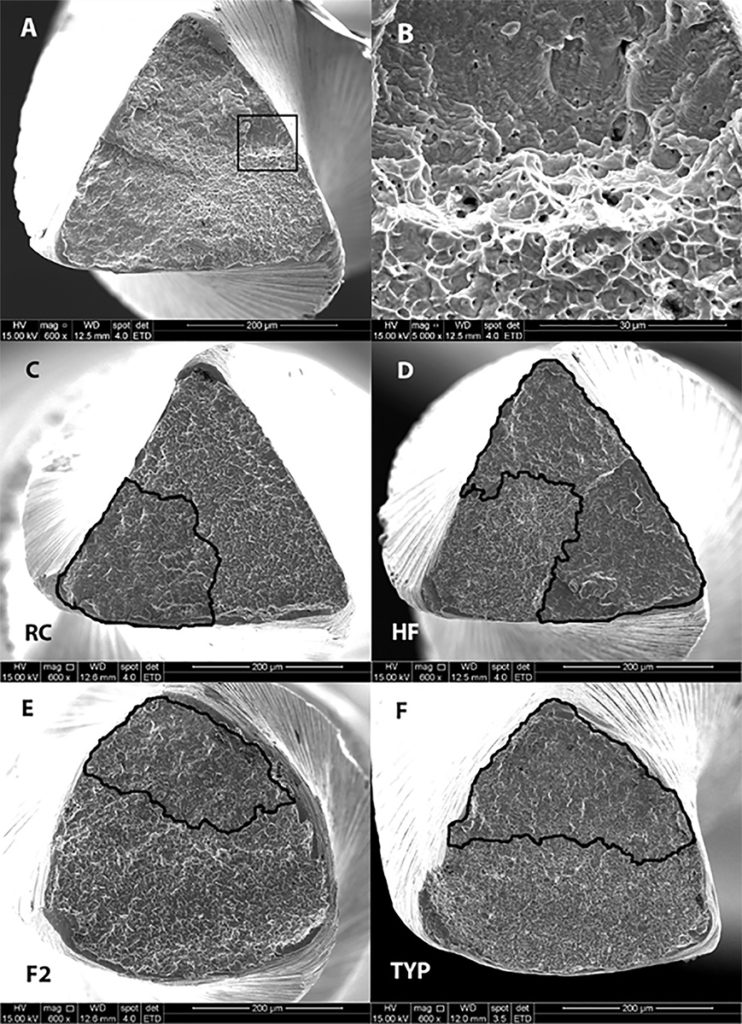 Fig. 1. Secondary electron images of typical fracture surfaces of superelastic and CM instruments. (A and B) HF instrument with different magnifications; the outlined area in A is the transition border between the smooth areas (containing fatigue striations) and the final ductile fracture (containing dimples). The outlined areas in C-F correspond to the region of fatigue crack nucleation and propagation (smooth areas). (C) RC, (D) HF, (E) F2, and (F) TYP.

Thus, the aim of this In Vitro study was to assess the influence of flexural fatigue loading on the torsional resistance of CM rotary files when compared with conventional NiTi files with similar dimensions and geometries. New 30/.06 instruments including Typhoon (TYP; Clinician’s Choice Dental Products, New Milford, CT) and HyFlex CM (HF; Colte- neEndo/Whaledent, Cuyahoga Falls, OH), made with CM technology along with RaCe (RC; FKG Dentaire, La-Chaux de Fonds, Switzerland) and ProTaper Universal F2 (F2; Dentsply Maillefer, Ballaigues, Switzerland), made of conventional NiTi, were analyzed. They have similar geometric design (RC and HF with triangular cross sections and F2 and TYP with convex triangular cross sections). A total of 120 files were used in this study. They were divided into 3 groups (n = 10 each system): Control group 1, instruments were fatigued until fracture to determine the number of cycles to failure (Nf); Control group 2 (CG2) instruments were submitted to torsion tests to failure to determine the maximum torque; an experimental group (EG) in which new instruments were fatigued to three fourths of their number of cycles to failure (Nf) and then submitted to torsion tests to failure. The fracture surfaces of 3 randomly selected instruments of each system were examined under a scanning electron microscope (SEM-FEI Inspect S50; FEI Co, Hillsboro, OR) to assess the main characteristics of the fracture process. Data were analyzed using 1-way analysis of variance (a = .05). New CM files had a significantly higher Nf when compared with SE instruments; HF exhibited the highest value (P = .001). The mean torque value for F2 was the highest (P = .001). CM files precycled to 3/4 Nf had a significantly lower torque than the new files (HF: P = .003, Typhoon: P = .001), whereas the SE instruments displayed no significant differences (F2: P = .059, RaCe: P = .079). Cyclic flexural loading significantly reduced the torsional resistance of CM instruments. The fracture surface of the instruments are shown in Figure 1. The outlined areas in 1C-F correspond to the regions of fatigue crack nucleation and slow propagation (smooth areas). These regions cover larger areas in the CM files, in agreement with the higher fatigue resistance of these files, considering that crack ramification is the main mechanism for improving this property. On the other hand, when the fatigued material undergoes a different type of loading, it is weakened by the presence of these cracks The clinical implications of the study is that CM instruments are appropriate for preparing canals with pronounced curvatures and the instruments of conventional NiTi would be indicated for narrower or atresic canals which require higher torsional resistance.