Prediction of the tertiary structure of proteins from their amino acid sequences is of great importance and of urgent demand in structural bioinformatics and biophysics, especially considering the increasing gap between the numbers of sequences and structures of proteins determined experimentally. Knowledge of native contacts between amino acid residues can greatly facilitate the protein structure prediction, and therefore the prediction of protein residue contacts from amino acid sequences has attracted more and more attention. In principle, native residue contacts that are essential for protein structure or function could be inferred from correlated mutations of residue pairs in evolution. With sequence data accumulated at an unprecedented speed, extraction of such coevolution information from multiple sequence alignment has become more and more practicable. Unfortunately, even the residue contact maps predicted from the state-of-the-art algorithms frequently contain many errors, which impairs the accuracy of structural models generated by contact-assisted protein structure prediction. However, information of residue pairing in β strands could be rather reliably inferred from a noisy contact map, due to the presence of characteristic contact patterns in β-β interactions. Such β-β contact information may benefit the tertiary structure prediction of mainly β proteins, a group of protein targets that have complex topologies and thus are highly challenging in protein structure prediction. 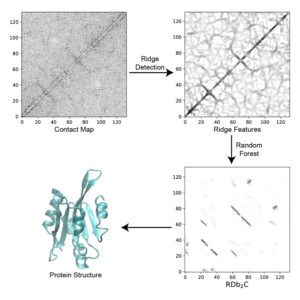 This work introduces a novel ridge-detection-based β-β contact predictor, RDb2C, to identify residue pairing in β strands from any predicted residue contact map. Theoretically, consecutive residue pairs from interacting β strands should present continuous contacts in the diagonal or off-diagonal directions on a native contact map, which may be disguised by noises in a predicted contact map. Here, we adopted the ridge detection, a traditional computer image processing technique, to capture the characteristic pattern of β-β interactions from predicted contact maps with high levels of noises. We then designed a novel multi-stage random-forest framework, which reads in the ridge information as well as additional features and predicts the residue pairing between all β strands. Our method could effectively improve the prediction on β-β contacts and thus the structural modeling of mainly β proteins.

The original codes, source data/results and the training protocol for practical usage are available at http://structpred.life.tsinghua.edu.cn/Software.html or at the GitHub address of https://github.com/wzmao/RDb2C.