Fluidizing membranes: a simple way to assist in the formation and size-control of giant polymersomes

In the 2005 article “A Giant Step Towards Artificial Life”, David Deamer outlined twelve requirements for creating an artificial cell or “protocell.” The very first of these steps is to form a membrane enclosure, encapsulating all of the materials necessary for sustaining a self-replicating and functional system. To effectively mimic a eukaryotic cell, membrane enclosures with an approximate diameter of 10-100 µm need to be created. Giant unilamellar vesicles (GUVs) are biological membrane model vesicles typically generated through the self-assembly of amphiphilic lipid molecules, creating vesicles in the desired size range for creating protocells. Some of the inherent limitations of lipid GUVs include a fairly short shelf-life due to the inherent instability of the lipid membranes. To overcome these limitations, block copolymers are being explored as synthetic analogs to lipids, specifically in the generation of giant polymer vesicles, or polymersomes. 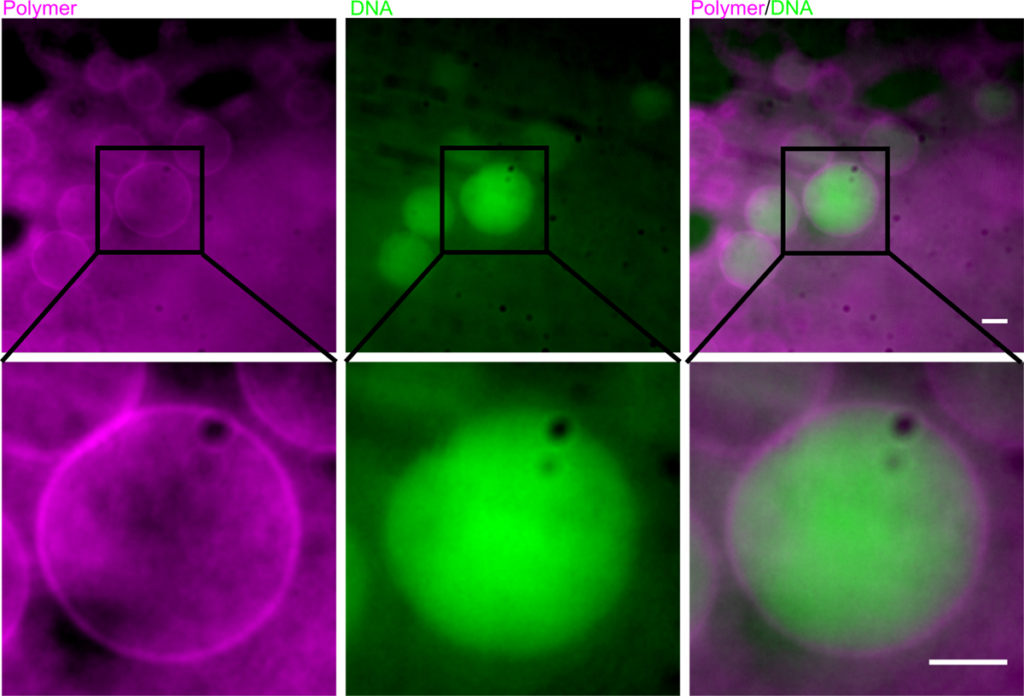 The formation of polymersomes, however, is typically limited to fairly labor-intensive techniques (i.e. electroformation) and results in rather low-yields. In the present study, a recently reported technique for the formation of lipid GUV vesicles was adapted for the formation of polymersomes (block copolymer vesicles). The gel-assisted rehydration technique involves depositing a layer of agarose on a glass coverslip, and fully dehydrating the agarose film. Polymer solutions are then spread on the dried agarose film, and the solvent is fully evaporated. Rehydration of the polymer layer results in rapid formation of giant polymersomes, with comparable membrane fluidity to polymersomes formed from traditional techniques. In contrast to the traditional techniques, polymersomes formed using gel-assisted rehydration may be generated using a wide variety of buffers (e.g., water, PBS, TBS, etc.) and various polymer compositions (e.g., diblock, triblock, charged, neutral, etc.), demonstrating the versatility of this technique.

Toward the application of polymersomes as artificial cell membranes, gel-assisted rehydration was used to encapsulate genetic material into the giant polymersomes. Here, a fluorescently labeled DNA oligomer was dehydrated directly onto the agarose layer prior to deposition of the polymer solution. Through rehydration, the DNA was successfully encapsulated into the formed polymersome. Overall, gel-assisted rehydration represents a versatile method for forming size-controlled giant polymersomes with the ability to encapsulate cargo, ultimately enabling the formation of synthetic, more-robust membranes enclosures required for creating protocells.