The process of crystal formation from solutions is an important subject in fundamental science and also the fabrication of pharmaceuticals, food, polymers and organic solid materials, but remains controversial. In solution crystallization, the formation of crystal nuclei plays an important role in determining crystal structure, size and polymorph. Meanwhile, fluorescence spectra are sensitive to molecular environment and aggregation. In principle, fluorescence spectroscopy can be used to probe the progress of molecular assembly on the scale of just a few molecules or that of a bulk process. We previously investigated the fluorescence spectral changes of perylene and a cyanostilbene derivative displaying aggregation-induced emission during evaporation. Studying concentration-dependent fluorescence spectral changes both in polymer films and during solvent evaporation provides information about molecular assembly and the nucleation and growth of crystals of fluorescent organic molecules. 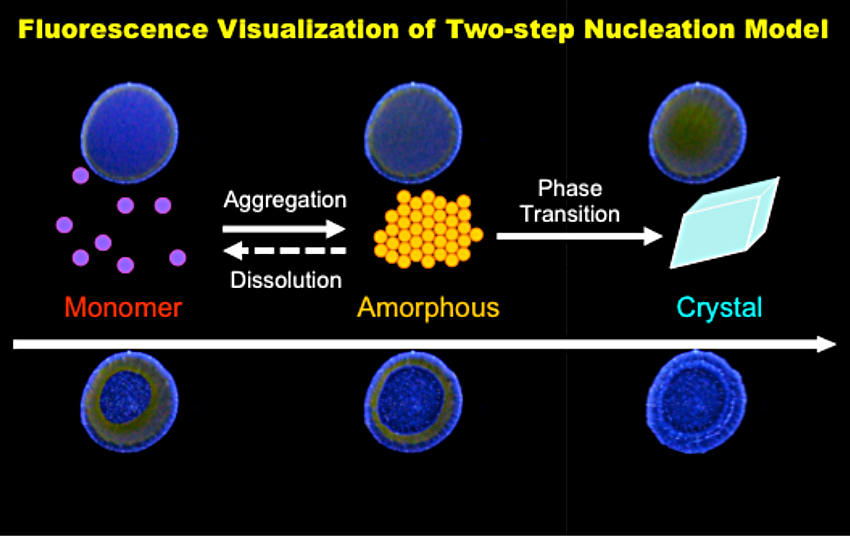 We report the direct visualization of the two-step nucleation model for crystallization of an organic molecule. Evaporative crystallization from a solution of a dibenzoylmethane boron complex displaying mechanofluorochromism was probed by fluorescence changes, and the dependence of fluorescence changes on complex concentration in a polymer matrix. We detected transitional emission from the amorphous state prior to crystallization, with emission color changing from purple to blue via orange during crystallization. This is the first demonstration of the two-step nucleation model based on fluorescence color changes. In this model, the intermediate state such as a liquid-like cluster has an important role in polymorphic expression, so is key to understanding the origin of crystallization. The present method has low requirements for experimental equipment because the crystal formation process can be observed using a conventional optical detection system under ambient conditions, making it useful to investigate the control of polymorphism of organic emissive materials.

This study clearly confirms the two-step nucleation model based on fluorescence color changes. This methodology can be used to understand growth kinetics from monomer to crystal via crystal nuclei. In addition, it can also allow direct visualization of Ostwald’s rule of stages during the phase change of organic solids.