From famine to feast: cells can adapt to nutritional changes

Sometimes we have mostly vegetables, at other times, meat; sometimes we eat much, at other times, little. Our diet can be quite changeable. This is all the more true for animals, which need to content themselves with what they can find or catch. Therefore, humans and animals must be able to deal with nutritional changes. So far, however, only little is known about how the cells of our body adjust for variable nutrient supply. By studying fruit flies, we have found that microRNAs (miRNAs) play a decisive role in this regulation. 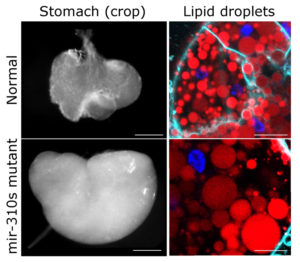 miRNAs are tiny RNA shreds that control the activity of genes. Each miRNA can affect many genes and, conversely, one gene can be controlled by multiple miRNAs. Thus, miRNAs simultaneously fine-tune multiple facets of the cell’s machinery.

We investigated the role of a particular miRNA cluster in the fruit fly Drosophila melanogaster and found that the miRNAs of the miR-310s family help the flies to quickly adjust their metabolism to the food supply. For this, these miRNAs target several genes of an important cellular signaling pathway at once. Our results have demonstrated, for the first time that miRNAs relay nutrient signals to cellular metabolism.

Flies on sugar diet
The mir-310s caught our attention because, this miRNA family reacted to stress and disease. Therefore, we addressed the question, whether the mir-310s help the animal to deal with unfavorable circumstances. Our analyses showed that flies, which lack the mir-310s due to a mutation have a number of genes changed their activity due to missing mir-310s. Furthermore, the amount of many proteins produced by cells was changed. Importantly, this included many proteins influencing cellular metabolism. This indicated that the mir-310s is crucial to adapt the metabolism to the nutrient supply. Does this mean that flies without the mir-310s are more sensitive to changes in their diet? 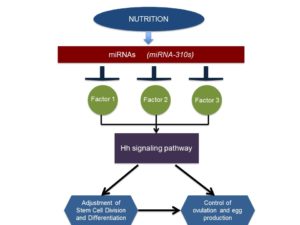 To tackle this question, we have put flies on protein restrictive diet and fed them with sugars only. And indeed, the mutant flies had substantial difficulties adjusting to the shortage of amino acids and other important nutrients; genes important for metabolism reacted completely differently in flies lacking the mir-310s when compared to normal flies. At first glance, the mutant animals appeared quite normal. However, when we investigated their tissues and organs, it became evident that flies without the mir-310s had a larger stomach and accumulated more fat. The cellular processing of nutrients appeared to be out of control.

Moreover, the female flies had altered ovulation. Importantly, similar-looking ovaries are found in flies with perturbations in the well-known Hedgehog signaling pathway. And there is another commonality: Hedgehog signaling also relays information depending on nutrient supply. This is particularly important in ovaries, since ovulation is highly energy-demanding. That is why we suspected a connection between the mir-310s and Hedgehog signaling. Further experiments indeed demonstrated that these miRNAs directly control several factors of the Hedgehog pathway at once and thus, influence the efficiency of egg production in response to diet.

Usually, microRNAs only fine-tune gene expression; however, if they, as is the case here, target several genes of the same signaling pathway simultaneously, their effect can be significantly enhanced. It is well possible that the mir-310s family is only a first example for many diet-dependent processes that are regulated by microRNAs.