Gap junction (GJ) channels, which allow direct transfer of electrical signal and exchange by metabolites between cells, are formed of 21 member of connexin (Cx) protein family in humans. Hundreds of GJ channels clustered in junctional plaques form electrical synapses and are known to be important in synchronization of neuronal networks, spread of excitation and other activities underlying information processing and memory formation in the central nervous system. In most models, it is assumed that conductance of the electrical synapse is constant and is equally strong in both directions. However, experimental studies show that gap junction channels exhibit current-voltage rectification and gating that depend on the transjunctional voltage (Vj). 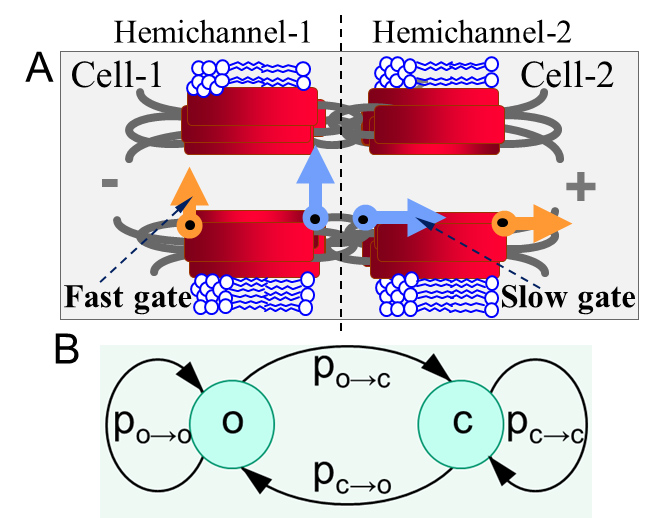 Fig. 1. The schematics of the gap junction channel (A) and possible gating transitions between open (o) and closed (c) states.

The gap junction channel consists of two hemichannels, each enclosing fast and slow gates, both arranged in series (see Fig. 1A).  It is predicted that the fast gate, which exhibits fast (< 1 ms) gating transitions between open and residual states, is associated with the N terminus domain of connexins lining the vestibule of the channel pore, while a slow gate, which exhibits slow (>10 ms) gating transitions between open and fully closed states, is associated with extracellular loops of connexins (see Fig. 1B). Rectification and Vj-gating properties as well as single channel conductance are connexin-type dependent and vary in a broad range among members of Cx family. For example, the most predominant connexin forming electrical synapses, Cx36, forms the least Vj-sensitive gap junction channels under normal physiological conditions, and their Vj-gating and rectification depend on intracellular concentration of magnesium [Mg2+]i and pH that largely reflect energetic state of cells. Variation in [Mg2+]i can be observed during normal diurnal-nocturnal cycle or in patients with schizophrenia, Parkinson’s and Alzheimer’s diseases, multiple sclerosis or epilepsy. Thus, electrical synapses could be a perspective target for future drug development efforts. Therefore it is important to reveal ultimate mechanisms regulating their function and for this purpose we developed   computational model of neuronal networks. 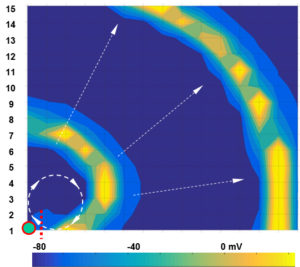 Fig. 2. Reverberations of excitation in a cluster of neurons caused by a single stimulus applied to the left/bottom corner cell. The rectifying junctions are shown by light blue segments. Colored bar is calibrated for transmembrane potential.

Excitability of neurons was simulated using Hodgkin-Huxley formalism. To model function of electrical synapse, we developed a stochastic model of voltage gating enclosing properties of fast and slow gates by using Markov chain approach. Our data revealed that the burst of action potentials (APs) can cause significant decrease of synaptic strength due to voltage-gating of GJ channel mediated by Vj that develops between neurons during the spread of APs. A decay of gap junctional communication mediated by Vj-gating can decrease synchronization of neuronal network, which could have implications on both physiological (e.g., information processing) and pathological (e.g., formation of epileptic seizures) conditions. We demonstrated that rectification of electrical synapses can result to unidirectional transfer of electrical signal that functionally resembles chemical synapses. Local regions of neuronal network communicating through rectifying gap junctions can trigger reverberation of excitation as shown Fig. 2, when a single external stimulus can cause formation of repeated spiral waves of excitation. It is presumed that reverberation of excitation is essential in formation of working memory and its consolidation into a long term memory during a deep sleep stage. Similar spiral waves are associated with epileptic seizures and cardiac arrhythmias.