Oral squamous cell carcinoma (OSCC) is one of the leading cancers in India. Currently, there are no specific biomarkers which can be used for prognostication of human oral cancer. Intermediate filament (cytoskeletal proteins) and their associated proteins have been shown to be aberrantly expressed in various cancers including oral carcinomas. In squamous epithelia like oral cavity, anchoring junctions namely hemidesmosomes (HDs) connect basal epidermal cells to the extracellular matrix. HD linker proteins (BPAG1e and Plectin) anchor intermediate filament proteins like Keratins to the cell surface through β4 integrin. Recent reports indicate that these linker proteins play a role in various cellular processes (eg. cell motility) apart from their known anchoring function. However, the available literature suggests that the role of these proteins in cell motility is context dependent. Moreover, the available information regarding molecular mechanisms underlying BPAG1e and Plectin associated phenotype in cancer is inconsistent. Previously, our laboratory has shown aberrant expression of keratin8/18 in human OSCC. Subsequent work from our laboratory revealed that knockdown of K8 in OSCC derived cell line (AW13516) resulted in alterations in α6β4 integrin mediated signaling, actin reorganization, reduction in cell motility, invasion and tumorigenicity. Based on these findings, it was hypothesized that linker proteins may have a role in cell motility and neoplastic progression of OSCC. 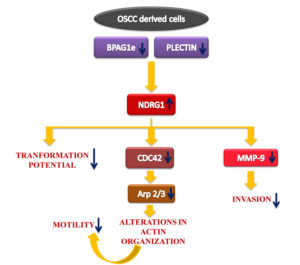 In conclusion, this study demonstrates that HD linker proteins play a crucial role in regulating cell motility, actin organization, cell invasion and tumorigenicity in OSCC derived cells possibly through NDRG1. Several studies (including present study) by our group have shown functional significance of aberrant expression of Intermediate filament proteins (like Keratins, Vimentin etc.) and their associated proteins (like BPAG1e, Plectin etc.) in oral cancer development. Further studies are necessary on human oral squamous cell carcinomas to investigate whether these proteins can be used as a battery of biomarkers for management of human oral cancer.