Plant breeding by gamma irradiation is one of the most important anthropogenic forces that influences ecosystem function and structure. It has been reported that gamma irradiation can affect the morphology, anatomy, biochemistry and physiology of plants that inevitably affect the plants’ interactions with different organisms. Accumulation of some secondary metabolites such as phenolic compounds and glucosinolates (as special defensive compounds belonging to Brassicaceae) is one of changes in plant tissues due to gamma irradiation that have important role in boosting defense process in reaction to pest damage. In the present study, a tritrophic system was utilized based on two canola mutant lines produced through gamma irradiation (Talaye 8-3 and RGS 8-1). P. xylostella, as a serious pest of Brassicaceae and Cotesia vestalis (Holiday) as a key biocontrol agent of P. xylostella were selected as model insects to find out functional interactions in the mutant canola – P. xylostella – C. vestalis  tritrophic system. As we found, the most effective bottom-up forces were the effects defined as Nitrogen→ relative growth rate of herbivore and Nitrogen→ pupal weight of the herbivore while pathways of parasitoid rm→ herbivore rm and wing area of parasitoid→ herbivore rm can be considered as relatively influential top–down forces in the current system (Fig. 1). 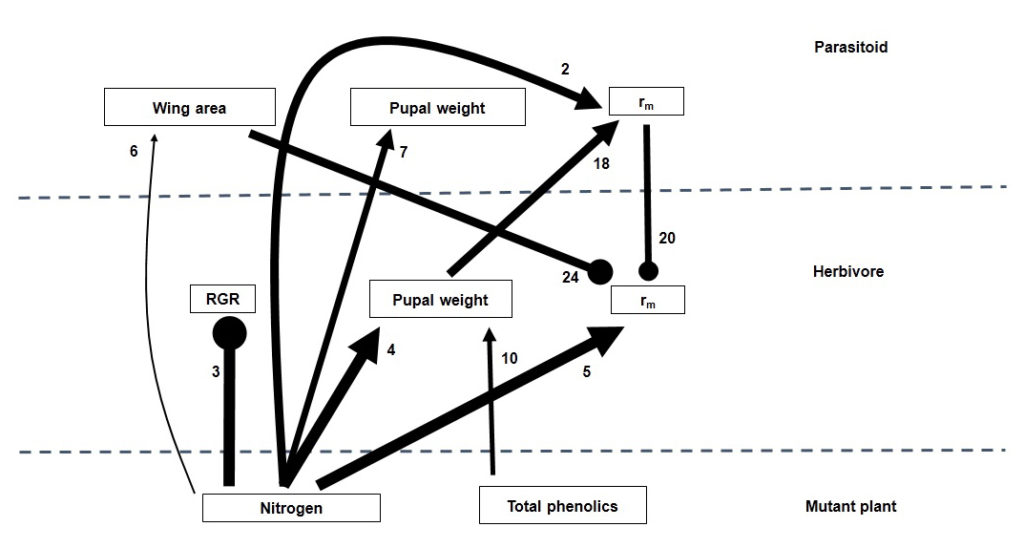 Fig. 1. Functional interactions of mutant plant (canola) quality on fitness of second (Plutella xylostella) and third (Cotesia vestalis) trophic levels in path diagram. Thickness of arrows indicates the effect size. Arrow heads are positive effects and circle heads are negative effects. The numbers next to the arrows show the path number. In this diagram, significant relationships just are drawn.

As an important result, we suggested that the physical mutation of the canola seeds did not flow well to the third trophic level. However, additional experiments on the mode of action of gamma rays could reveal the plausible effects of the rays on the parasitoids. In the current study, we measured just nitrogen and total phenolic compounds of varieties while it is possible that other phytochemicals vary after gamma irradiation.

Total fecundity of Cotesia vestalis (Holiday) reared on Talaye 8-3 was less than those reared on its control. It is inferred that the effect of physical mutation can be different depending on plant cultivar. However, performance of C. vestalis reared on P. xylostella fed on cultivar RGS was lower than that on its mutant line in terms of total pre-adult duration. The latter parameter did not differ on cultivar Talaye in contrast with Talaye 8-3. Moreover, our findings suggested a positive relationship between mutant plant nitrogen content and pupal weight of the parasitoid. The most likely explanation for this result is that the effect of high-quality plants can lead to high-quality parasitoids indirectly. Nitrogen content of mutant lines had a relatively strong positive effect on the parasitoid’ intrinsic rate of increase (rm). This survey also revealed relatively strong negative relationship between parasitoid wing area (as an indicator of body size) and herbivore rm. Our early concerns about cultivation of mutant canola was destructive effects from these genotypes on the beneficial insects especially parasitoids. Our results showed that this concerns could not be very reasonable as most of the biological parameters of the parasitoid did not change on the mutant lines of canola even though a decrease was observed in the fecundity of the parasitoid only on one of the experimental lines. However, at this step and with caution, we can conclude that mutant lines of canola were not harmful for the parasitoid. This investigation showed that effects of physical mutation of plants by gamma rays on diamondback moth may vary depending on the plant cultivar. Also, random multiple genetic modifications in plants caused by gamma ray may be responsible for differences in plants quality and the subsequent performance of insects reared on mutant lines of different cultivars. Therefore, mutant plants should be utilized with caution. Relationships among three trophic levels showed that nitrogen could be a stronger predictor of biological parameters of the herbivore and its parasitoid than phenolic compounds. In a comprehensive IPM program, activity of other insect communities associated with mutant plants should be considered especially under field condition.