Mosquitoes are most dangerous tiny animal killing 7.25 million peoples in the world annually, as they transmit many deadliest pathogens causing malaria, dengue, chikungunya, zika virus infection etc. Despite of the strong innate and adaptive immune system in humans, these pathogens are able to defeat the immune power of specialized blood cells, but surprisingly the same pathogens fail to cause severe disease conditions in the mosquitoes.  For the last few decades scientists are trying hard to know that how these small flies manage to fight against these microbial pathogens. Although, it is known that mosquitoes rely on the germ line encoded innate immune system, but the biology of mosquito blood cells is unknown. 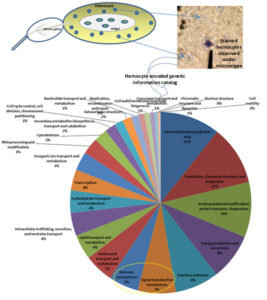 A team of researchers led by Dr. Rajnikant Dixit, at India’s National Institute of Malaria Research, used an advanced molecular technology to dig out the genetic information of the mosquito blood cells. To do this investigation, cold anesthetized adult mosquito was bedded on the microscopic slide to pool the mosquito’s water like blood using specialized micro-syringe. Following deep sequencing technology, the team was successful to capture at least 3025 genes from the minute cells. To decode the biological information ‘locked in’ the mosquito’s blood cells scientist used specialize tools of bioinformatics.

To the surprise scientists found many interesting information valuing that blood cells may be tiny, but carries ability to do diverse functions. Researchers identified many hemocyte genes capable of immune functions equivalent to vertebrate blood cells. To demonstrate that how mosquito hemocytes manage to fight against any pathogen, experiment was planned in two directions to give immune challenge to the mosquitoes. In one strategy live bacterial soup was injected with the help of micro-syringe into the thorax, expecting a direct interaction of bacteria with circulating hemocytes. Other way, researchers gave oral supplement of the bacterial soup to the mosquitoes, to track indirect response via gut tissue. The result of this study conveyed that hemocytes are specialized to recognize, discriminate and may rapidly clear the foreign invaders, as in humans. In addition to this, researchers were surprised to know that mosquito hemocytes are able to code for many unusual proteins which not only make them metabolically active, but also important for their communication, attachment, movement, signalling and nutritional supply throughout the body of the mosquitoes (Fig. 1.).

A future challenge for the researcher remains to know whether hemocytes carries any long term immune memory, like vertebrates and how these cells fights against real pathogens of malaria, dengue etc.