Glucocorticoids as a double-edge sword in the inflamed intestine

Chronic intestinal inflammation, in the form of the conditions ulcerative colitis and Crohn’s disease, is relatively common. Glucocorticoids (GCs) are the therapy of choice for the treatment acute flares of these diseases, but they have significant limitations, with many patients not responding to therapy, responding only temporarily or becoming dependent on GCs for disease control. In addition, GCs are characterized by severe side and they are not useful to prolong remission. In animal models of intestinal inflammation GCs display the expected antiinflammatory effects but this is associated with worsening in the animal general condition and even increased mortality. 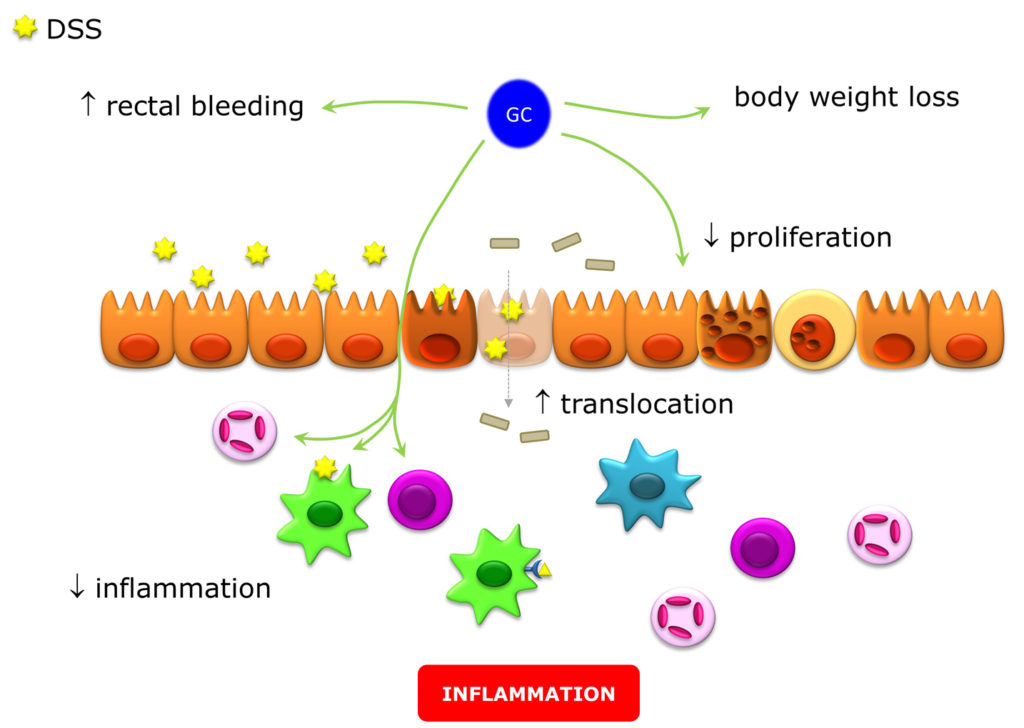 The dextran sodium (DSS) model of colitis was induced in regular and microbiota depleted C57BL/6 mice, which were treated with budesonide or vehicle (control group). Budesonide (1-60 µg/day) exerted substantial colonic antiinflammatory effects but at the same time, it also aggravated body weight loss, increased rectal bleeding, and induced general deterioration of animal status, bacterial translocation (transfer from the colonic lumen to blood) and endotoxemia. Importantly, the protective and harmful effects were both attained at doses corresponding to clinically used doses, after adjustment for body size.

Budesonide also enhanced DSS induced colonic damage in microbiota depleted mice, which do not develop significant inflammation, indicating that GCs interfere with epithelial repair even in the absence of an inflammatory response. Thus our data demonstrate that budesonide, and by extension possibly other GCs, exerts a dual role in the inflamed intestine. The mechanism of the harmful effects appears to involve interference with epithelial proliferation/repair and weakening of local immune defense. The deleterious effects of budesonide were present but greatly diminished in noncolitic mice or in mice with lymphocyte transfer colitis, a different colitis model with less intense epithelial damage, suggesting that they are substantially amplified in the context of ongoing tissue injury (i.e. the situation in which these drugs are regularly used).

Our study suggests that GCs may similarly enhance the deterioration of barrier function in inflammatory bowel disease patients, producing sepsis, increased blood loss and/or loss of disease control, offsetting their primary antiinflammatory effect. It is interesting to note that rectal blood loss has been related to therapeutic failure of GCs in this context. Because patients with uncontrolled inflammatory bouts are treated surgically frank sepsis is prevented even if GCs do impair endotoxemic defense. Further research is needed to clarify these issues.