GlyT2 inhibitors: Getting the balance right

In the central nervous system, signals are sent through brain pathways using neurotransmitters, the chemical messengers of our brain. The strength and duration of these messages are governed by the concentration of neurotransmitters in the synapses between neurons, which is in turn controlled by transporters. Transporters achieve this by clearing the neurotransmitter from the synapse, moving the neurotransmitter back into the neuron and ultimately terminating signalling. Because of their critical role in regulating neurotransmitter concentrations and terminating signalling, neurotransmitter transporters are important drug targets to treat many neurological disorders. One of these promising targets is the glycine transporter type 2, GlyT2 which regulates the inhibitory neurotransmitter, glycine, and has been implicated in  dysfunctional signalling underlying chronic pain. Despite their promise as drug targets we must ask the question: how do we target a protein with such a critical role? A number of glycine transporter blockers completely abolish transport and whilst they relieve pain they also cause adverse neurological effects. It is thought that a complete block of GlyT2 does not allow for glycine to be recycled back into the neuron, which is a problem in the long term as it prevents further glycine neurotransmission. It is predicted that a partial GlyT2 blocker would overcome this problem. Like closing down a few lanes of traffic; cars will still be able to move across and eventually get to their destination, albeit more slowly. This slowing of traffic results in a short term congestion, or build-up of glycine which is able to act in the synapse for a longer period of time. Importantly with a partial blocker, a steady stream of glycine should still be travelling through the transporter back into the neuron where it can be recycled and re-released when glycine is later required. There are a number of questions which need to be addressed in order to understand whether GlyT2 blockers will be effective therapeutics in the treatment of chronic pain. This begins with a mapping of how the different blockers alter the flow of glycine through the transporter and their pharmacological properties. 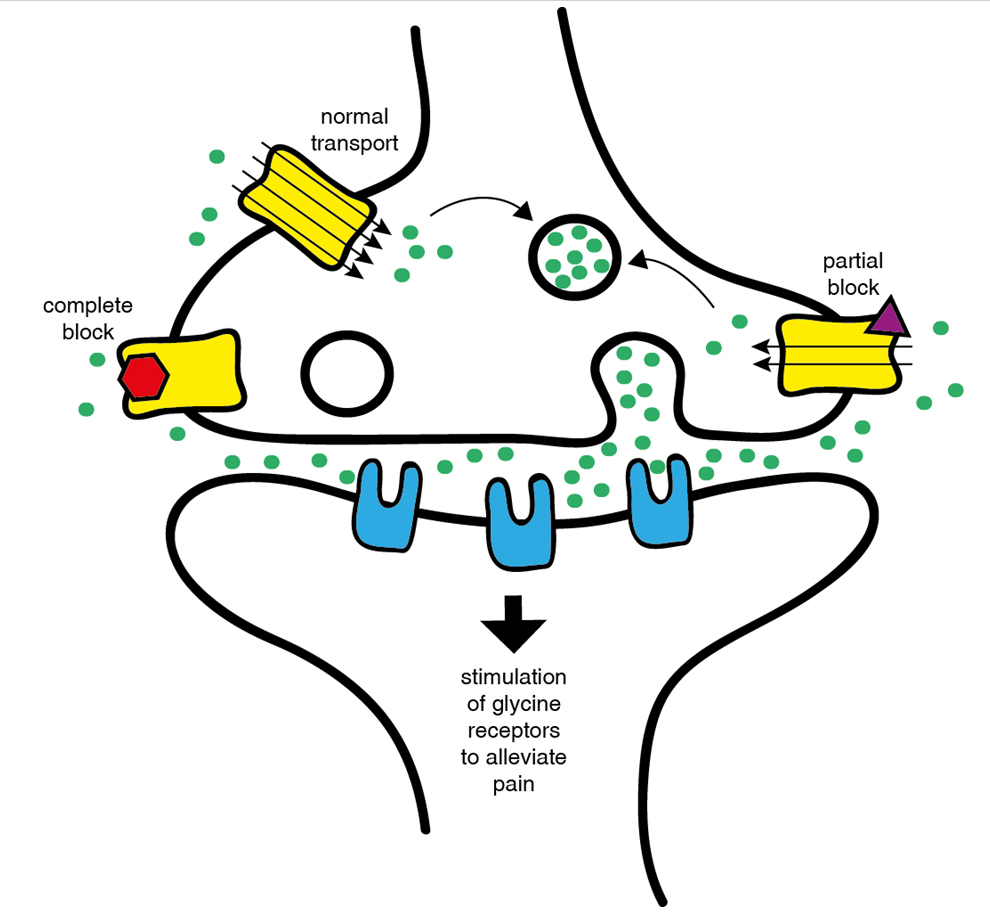 Fig. 1. In normal neurotransmission, glycine (green spheres) is released into the synapse where it can act on glycine receptors (blue) to stop pain signalling. Following its actions glycine is removed from the synapse via glycine transporters (yellow) and back into the neuron to be recycled into vesicles. A complete blocker (red hexagon) stops glycine from travelling back into the neuron. A partial blocker (purple triangle) will still allow for glycine traffic to slowly flow into the neuron for recycling.

ALX1393 is a potent, complete GlyT2 blocker which causes prolonged inhibition of transport. When administered to mice suffering from chronic pain by direct injection into the spinal cord, pain symptoms are reduced with no adverse CNS effects. Initially this might seem promising; however if the drug is injected into the blood stream only 5% of the drug gets to spinal cord to relieve the pain symptoms. Thus, to get effective relief from chronic pain larger doses are required which have the potential to completely shut down the system and restrict its effectiveness as an analgesic. Another GlyT2 blocker, ORG25543, also reduces pain symptoms in the short term, but prolonged drug use cause adverse neurological problems.  N-Arachidonyl-glycine is a fatty acid molecule that is produced in the spinal cord and may form part of the body’s natural pain fighting arsenal. N-Arachidonyl-glycine and other structurally related bioactive fatty acids are partial blockers of GlyT2 which are proposed to slow the clearance of glycine whilst still allowing for a slow rate of recycling of glycine, an important consideration when designing an effective blocker. It is thought that this property permits N-arachidonyl glycine to effectively relieve symptoms in mice suffering from pain, without producing any unwanted side effects

Whilst a number of GlyT2 blockers show effectiveness in enhancing glycine neurotransmission and subsequently, ameliorating pain symptoms; further investigation into the ideal pharmacological profile is required to produce more effective analgesics without the undesirable adverse effects.