Highly dispersed gold nanoparticles supported on transition metal oxides have been shown to catalyze important chemical reactions such as low – temperature oxidation of carbon monoxide ( CO ). Catalytic performance of gold / oxide system depends on structural effects (particles’ size and shape), interface between gold and support, modified electronic structure of gold particles, and oxidation state of gold. Small clusters of several atoms, i.e. of subnanometer size, are sensitive to a change in the number of atoms, configuration of the cluster, and the support. For such small structures the oxide support is close enough to interact with adsorbates on the gold, and thus may play an active role in their bonding, and influence catalytic activity of gold. The role played by cationic gold in catalytic CO oxidation on oxide surfaces is of key importance. 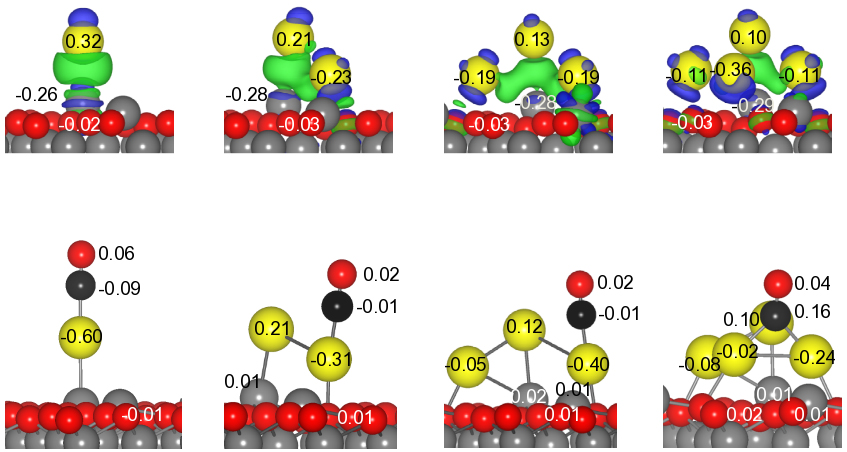 In this work, using density functional theory, we have performed theoretical studies of adsorption of gold subnano-structures on the iron terminated surface of  magnetite. Magnetite is one of the most stable iron oxides. Its (111) oriented surface, in crystallographic notation, represents the natural growth facet of magnetite and is the most thermodynamically stable one. The study concentrates on interaction of the one to four gold atom structures with the magnetite surface, in order to understand how the oxide support affects the structure and charge state of deposited small gold particles, and to identify single active centers for their interaction with CO molecules, and thus to give a better insight in the factors important in catalysis. The energetically favorable class of the adsorbed gold systems has been determined and the trends that occur in their structural, energetic, electronic, and magnetic properties have been examined.

The adsorbed single gold atom is negatively charged. However, for larger gold structures the adsorption binding energy is substantially increased and the structures exhibit a net positive charge (Fig. 1), which is considered to be essential for the enhanced catalysis of CO oxidation. The interaction of CO molecules both with the bare magnetite surface, and the one with small gold structures, have been examined with respect to the nature and magnitude of the  adsorbate—support charge transfer. CO bonding to gold nanostructure is through the carbon atom. We demontrate that upon CO adsorption all of the considered gold structures are cationic (positively charged), and the bonding of CO is strongest to Au atom of the structure which is not directly bonding to the iron atom and which exhibits a most positive charge (Fig. 1). The overall charge flow is from the CO/gold system to the magnetite support. The insights provided by this work contribute to better understanding of reactivity of gold nanoparticles supported on magnetite surfaces in the catalytic oxidation of carbon monoxide.