Mood disorders are emotional disturbances consisting of prolonged periods of excessive sadness, excessive joyousness, or both. Exposure to harsh parenting practices or to maltreatment during childhood can increase individuals’ vulnerability to mood disorders and the severity of the illness, possibly by altering the stress response system and sensitizing individuals to later stress. The hippocampal formation is one of the structures more sensitive to stress, including childhood abuse, because it is a particularly plastic and vulnerable brain region. Diminished hippocampal volume was observed in adults with maltreatment histories and in psychiatric disorders, including mood disorders. 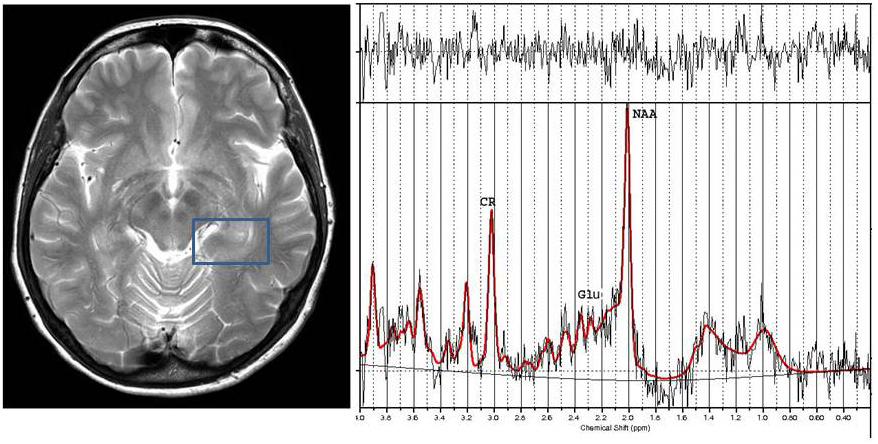 The in vivo levels of glutamate in the brain can be detected using single proton magnetic resonance spectroscopy (1H-MRS), a non-invasive brain imaging technique that can detect alterations in brain biochemistry in the presence of apparently normal anatomy. Resonances in the 1H-MR spectrum can be reliably quantified for several metabolites with brain concentrations in the millimolar range including the excitatory amino-acid glutamate. Here we measured concentrations of glutamate in the hippocampus of 38 patients affected by mood disorders in a depressive state, and of 17 healthy controls with in vivo 1H-MRS in order to specifically address the interrelationships between hippocampal glutamate concentrations and exposure to a stressful environment during childhood. In adult depressed patients higher exposure to a stressful environment during childhood is associated with lower levels of glutamate in the hippocampus. No effect was observed in healthy controls. 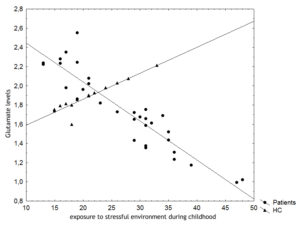 A sparse but consistent literature associated mood disorders and their most detrimental clinical features with a reduced glutamate import to brain structures. Our study is in agreement with data suggesting a hypofunctionality of the glutamatergic system following exposure to stress during early life both in humans and animal models. Different mechanisms have been proposed to explain this hypofunctionality of the glutamatergic system. First, genetic mechanisms do to environmental factors may modify the cell receptors binding glutamate, as observed in animal models of early stress, could hamper the correct functioning of the glutamatergic system. Second, abnormalities in the astrocytes, the cells responsible for the reuptake of glutamate at the end of the signaling process, could impair the uptake and recycling of glutamate in the brain. The hippocampus is a region crucial for plastic changes underlying learning and memory processes. The alterations of synaptogenesis and neural plasticity, which are hypothesized to underlie the pathophysiology and treatment of depression, could follow abnormalities observed in the hippocampus. Accordingly, negative factors that decrease synaptogenesis like stress seem to increase vulnerability to depression, for example by increasing vulnerability to further stress, while treatments or conditions that enhance synaptogenesis have antidepressant actions and reduce vulnerability. Finally, early stress has been associated with hippocampal volume also in healthy controls suggesting that the effect of early stress on the hippocampus could be a general effect which is more pronounced in patients because of a higher load of stress.