Food turns into nutrients in the stomach and small bowel and the nutrients need to be absorbed through the epithelial cells and waste needs to be removed. The muscle layers of the gut make sure that gut content is broken down, mixed with digestive enzymes and moves its way slowly towards the exit. To make this happen, activity from nerves coming from the brain, and the nervous system within the gut, are of critical importance. But for the orchestration of the motor patterns, some for absorption and some for transit, the pacemaker cells play a critical role. Most of the motor patterns in the gut are very rhythmic, three per minute in the human stomach, 12 per minute in the human intestine. 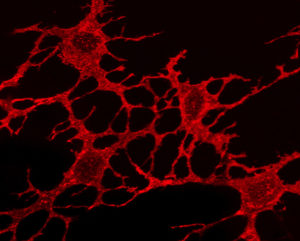 Fig. 1. The pacemaker cells of the gut, the interstitial cells of Cajal, form a continuous network within each organ, here shown in the mouse colon.

These rhythms originate in pacemaker cells, the interstitial cells of Cajal, named after Santiago Ramon y Cajal, who discovered the ICC in the 1890’s. However it was not until the 1980’s that ICC came to be considered essential for our understanding of gut motility and gut motor dysfunction. In the 1990s we discovered that mice without ICC in the intestine did not show classical peristalsis, and we showed that isolated ICC, but not isolated smooth muscle cells, exhibited spontaneous rhythmic electrical oscillations. The ICC form a continuous network of cells around the circumference of the gut organs and all the way along their length (Fig. 1). Within this network, all the millions of ICC are oscillating and because the cells are electrically coupled, the oscillations (the pacemaker activity) synchronize along the gut. The direction of propagation is largely determined by frequency gradients; the pacemaker activity travels from areas of higher frequency to lower frequency. Changes in network properties, that is, changes in frequency gradients, changes in coupling strength between cells which is physiologically regulated, increases in biological noise in frequency and coupling strength created by “background” neural activity, all this can change motor patterns from serving absorption to serving transit and many patterns in between.

In the gut organs, several independent networks of ICC are present. One of the networks appears to be active 24 hours per day, always ready to translate stimuli into ordered motility. We recently discovered that one of the other networks can create pacemaker activity on demand, and then the activities of the two networks can interact in a highly specialized manner, commonly observed in the brain: the phase of the pacemaker on demand (the developing depolarization) changes the amplitude of the persistent pacemaker and this can change a propulsive motor pattern into a segmentation pattern, suggesting that nutrient can evoke this to make sure that the motor pattern serves absorption when nutrients are present in the lumen.

ICC are very closely connected to nerves inside the gut and they also are connected to vagal nerves so that the state of the organs can be monitored by the brain. Abnormalities in the brain-gut axis communication are underlying many modern symptoms of gut pain and abnormal gut function. ICC are at the center of this communication and are part of sensorimotor units that are present throughout the gut wall. ICC are closely linked to diseases of gut motility such as gastroparesis and constipation. Pathology shows injured and reduced ICC but the exact role ICC play in symptoms and dysmotility is not known. In the human colon we perform high resolution manometry, we bring 84 sensors in the colon and monitor motor patterns and we correlate normal or abnormal rhythmic motor patterns with ICC health or injury. Further research into ICC, only discovered by physiologist and clinicians a few decades ago, promises to hold the key to many discoveries in gut functioning and gut disease.

A Personal Perspective on the Development of Our Understanding of the Myogenic Control Mechanisms of Gut Motor Function.
Huizinga JD
Adv Exp Med Biol. 2016