Autoimmune sensorineural hearing loss (SNHL) is a rare clinical entity accounting for less than 1% of all cases of hearing loss; however, this could be an underestimation based on the absence of specific diagnostic tests and the complexity of differential diagnosis. The disease could be localized only in the ear or hearing loss could be a symptom of a systemic autoimmune disease.

The definition of autoimmune SNHL varied over decades.  Malik et al. proposed the term “immune-mediated inner ear disease” (IMIED) for all cases, distinguishing between “organ-specific” (OS-IMIED) and “systemic” (S-IMIED) forms, on the light of the consideration that some organ specific disorders might be only the initial manifestation of a more systemic disease. 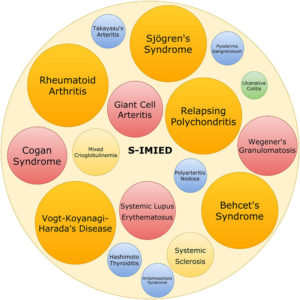 The incidence is controversial. The audio-vestibular  involvement in several systemic autoimmune disorders has been reported by various authors. However, incidence of involvement of the inner ear in S-IMIED has been described rarely, whilst prevalence was reported more frequently (Fig. 1 and 2).

The management of IMIED is aimed at hearing preservation. Pharmacological treatment is limited mainly to high-dose corticosteroids with prolonged taper and low-dose maintenance therapy. Although an initial clinical response to steroids has helped to define the diagnosis, for those with progressive hearing loss requiring corticosteroid treatment, only 14% remain responsive after 34 months. Moreover steroid-associated side-effects occur in 15% of patients during the first month of treatment and 6% have to discontinue steroid therapy.

Several strategies have been proposed to overcome this problem, such as shorter steroid regimes  that might be associated with a higher rate of relapse, or intratympanic steroid injections. For the future, the possibility of interventions modulating the immune system directly in the inner ear to repair the tissue organization and improve hearing in patients with SNHL has been speculated. Tissue macrophages in the inner ear appear to be a potential target for modulating the immune response in the inner ear in the pathophysiology of SNHL. 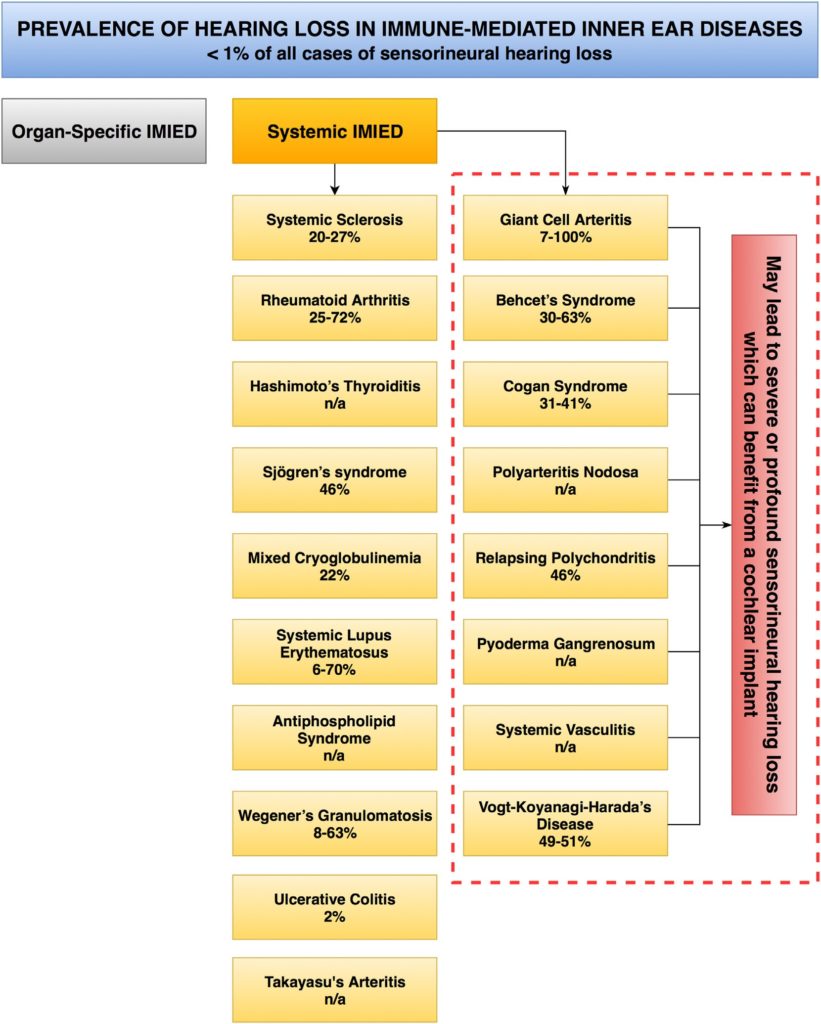 Excellent results and good performance in implanted IMIED patients have been reported, compared with patients with other causes of deafness. Interestingly, regardless of the etiology of the various diseases affecting the inner ear, pathological findings are identical: they include degeneration and destruction of the peripheral receptor; segmental and diffuse infiltration of lymphocytes, plasma cells, and macrophages; proliferation of fibrous tissue; and varying degrees of ossification of the inner ear. Cochlear fibrosis or ossification has been found to affect up to 50% of implanted ears, mainly caused by segmental and diffuse infiltration of lymphocytes, plasma cells, and macrophages, and proliferation of fibrous tissue. Early diagnosis and immediate therapeutic approach, could give better results. In case of severe/profound deafness an earlier implantation may be indicated before post-inflammatory obliterative changes in the cochlea.