The opportunistic human pathogen, Candida albicans hinges on the heat shock factor-1 (HSF1), a client protein of the well-established heat shock chaperone (protein folding helper), HSP90 for proficiently modulating thermal stress response. In addition to its implications in reciprocation to heat shock, HSF1 is essential for sustaining the viability and virulence of C. albicans. The underpinnings that, the conditional mutant of the heat shock factor-1 (HSF1) in C. albicans displays enhanced susceptibility not only towards a plant alkaloid, berberine, but also to diverse antifungal drugs has been previously established by us. 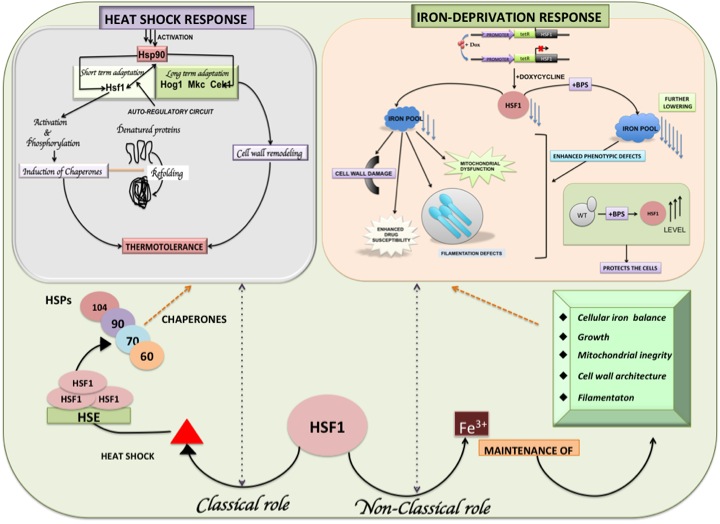 The present study reveals an additional phenotype, related to non-heat shock responsive levels of HSF1 where, an intricate relationship between cellular iron and HSF1 mediated drug susceptibility of C. albicans is disclosed. For instance, at 30°C, the conditional deletion of HSF1 leads to lowering of intracellular iron pools resulting in enhanced drug susceptibility, dysfunctional mitochondria, and compromised cell wall integrity. Notably, all of these non-heat shock phenotypes observed could be rescued upon exogenously supplemented iron. The novel phenotypes presented by the mutant at basal conditions i.e. at 30°C, however, do not appear to be directly linked to the global regulation of iron-dependent gene expression. External chelation of iron of HSF1 mutant cells led to severe growth defects and apparently triggers an iron starvation signal in the cell thus, demonstrating that HSF1 is essential for C. albicans cells to tolerate the iron deprivation stress. Additionally, HSF1 also influences a predominant attribute governing the virulence of C. albicans, i.e. is its morphogenetic plasticity wherein, the conditional mutant of HSF1 portrayed inability to form hyphae even under solid hypha inducing conditions.

Taken together, besides the well-documented roles of HSF1 in reciprocation of thermal stress, the present study illuminates its novel roles under basal conditions and provides molecular insights into its role in iron deprivation and drug tolerance of C. albicans.