How a cellular samurai may be linked to autism

Inside cells, a highly dynamic and ever-changing cytoskeleton network determines cell shape (permanent or temporary), powers movement (intracellularly or on a substrate), aids cell division and segregation of chromosomes in daughter cells, and supports cellular extensions like cilia and flagella. One type of cytoskeleton, the hollow unbranched polymeric tubes named microtubules (MTs), possess the chemical properties and interacting protein partners that enable cytoskeleton plasticity by regulating their own growth and shrinkage. 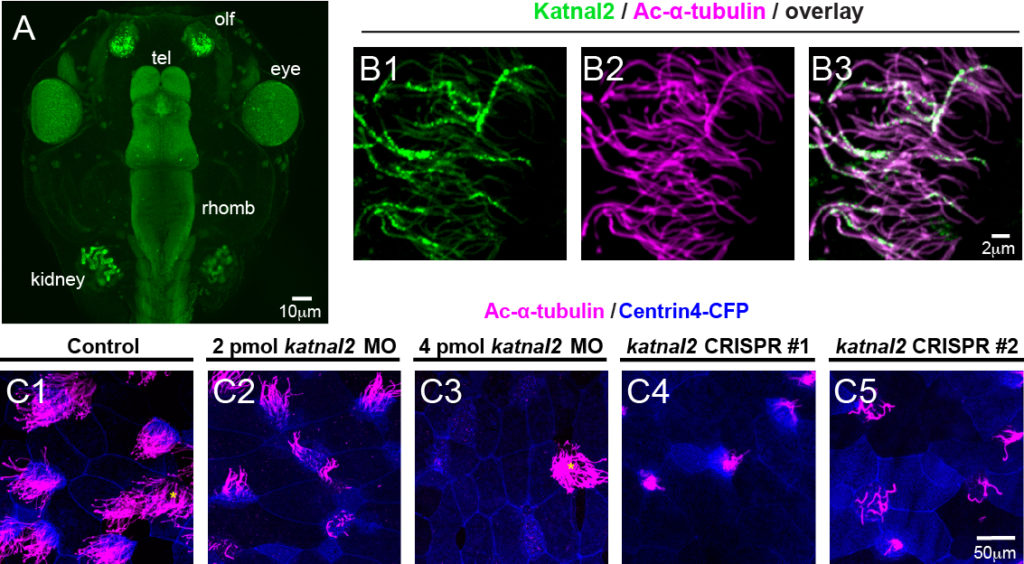 Fig. 1. Katnal2 is enriched in the nervous system and ciliated tissues in X. tropicalis embryos. Katnal2 immunofluorescence in stage 45 tadpole (A) and cilia of multiciliated cells of the epidermis (B1; green), co-stained for acetylated α-tubulin (B2, Ac-α-tubulin; magenta and overlay of colours in B3). Katnal2 loss causes reduced and highly disorganized cilia (axonemes in magenta, basal bodies in blue), in a dose-dependent manner, either with use of translation-blocking morpholinos (MO; panels C2, C3, control in C1) or genome editing (panels C4, C5). Abbreviations: tel=telecephalon; olf=olfactory epithelium; rhomb=rhombencephalon.

In the early 90’s an enzyme, named Katanin after the sword of the mighty Japanese samurai warriors (katana), was shown to bind and sever cellular MTs. The shorter MT fragments, generated by Katanin’s activity, are used as seeds to generate new or remodel existing cellular structures. Katanins, together with other MT severing proteins called Spastins and Fidgetins, are critical for cellular and developmental processes, such as the formation of axons in neurons and of sensory or motile cilia and assembly of mitotic and meiotic spindles. Indeed, we previously characterized a katanin-like protein, KATNAL2, as a multitasking protein involved in vitally important processes affecting MT dynamics, cytokinesis, ciliogenesis, and centriole numbers inside mouse cells. Additionally, we showed that the activity of KATNAL2 impacts on cell cycle progression through modulation of MT acetylation and in so doing, profoundly affects cellular size, which is strikingly enlarged when Katnal2 is silenced.

KATNAL2 has attracted intense interest not only because of its apparent significance in cellular physiology; several sequencing studies, involving large numbers of families, identified de novo mutations in the KATNAL2 gene as genuine risk factors for sporadic autism. Autistic spectrum disorders, although extremely well defined by symptoms such as altered social communication, inflexible language and repetitive sensory motor behavior, encompass a wide range of mental pathologies and impairment. Current consensus considers autism as a pervasive neurodevelopmental disease due to abnormalities affecting some of the most fundamental aspects of nervous system function.

The autism connection of KATNAL2 motivated our current study in which we harnessed the power of the most recent genome-editing technique, CRISPR-Cas9, to investigate what happens to a whole organism during its embryonic development in the absence of katnal2 expression. We used the diploid frog Xenopus tropicalis; the Xenopus embryo/tadpole is a prolific model for the study of vertebrate neurogenesis and development. We identified two Katnal2 proteins in X.tropicalis and found them predominantly expressed in the developing nervous system and particularly enriched in highly ciliated tissues, such as the dorsal mesoderm, the gastrocoel roof plate, the floor plate, the brain telencephalic ventricles, epidermis, nephrostomes (kidneys), otic vesicles (inner ears), and pharyngeal arches (Fig. 1A). In cells, Katnal2 localized to centrioles, mitotic spindles and ciliary axonemes and their basal bodies (Fig. 1B1-B3). Gene editing of katnal2 or use of translation-blocking morpholinos had marked effects on neurogenesis, affecting proper blastopore closure, neural tube closure and inhibiting neural crest cell migration. Strikingly, katnal2 knockdown resulted in reduced brain size, particularly in the telencephalic region, accompanied by significant reduction in the number of ventricular zone progenitor cells (Fig. 2). Organogenesis was also impacted: the length of the body anterior-posterior axis was reduced as was eye size and pigmentation, and cranial cartilage. Embryos often showed edema, indicating kidney malfunction. Targeted multiciliated cells showed reduced ciliation, and those fewer cilia appeared shorter and displayed aberrant basal body behavior and apical actin formation (Fig. 1C1-C5). 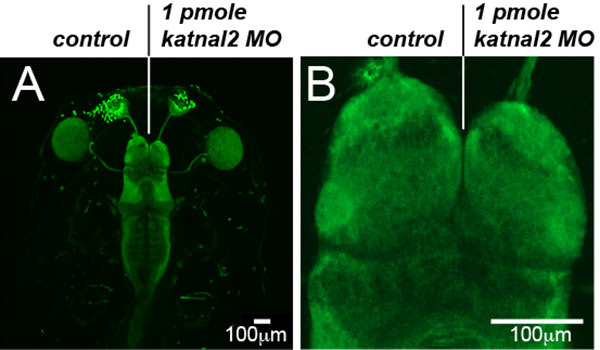 Fig. 2. katnal2 is required for telencephalon development in X. tropicalis. Representative stage 46 tadpole, stained for β-tubulin to visualize the nervous system, following injection of 1 pmol katnal2 morpholino (MO) into the left half of the embryo at the two-cell stage (A). Close-up of the telencephalic region to show the visibly reduced brain size only on the injected, right side (B).

The observed effects after Katnal2 loss-of-function on nervous system development and brain size control are severe and, combined with the defects in the organization of apical actin in multiciliated cells, suggest a role for Katnal2 during the regulation of Wnt/planar cell polarity (PCP)-dependent processes. Katnal2’s MT severing function could contribute to the formation, organization or maintenance of subapical MTs required for stable PCP complex formation. The role of Katnal2 in the nervous system could therefore reflect its function in polarity and directional cell division, especially given its localization in centrioles and mitotic spindles of telencephalic progenitors. Alternatively, Katnal2 could influence proliferation through indirect effects via ciliary signaling or via deregulation of the cell cycle. Potential roles for Katnal2 in post-mitotic processes (e.g. axon outgrowth and migration of differentiating neurons) are also plausible. Our study demonstrates the power of our approach in the quest of attempting to decipher the molecular mechanisms of neurodevelopmental disease.