How cancer cells resist the action of microtubule-targeting chemotherapeutic drugs? A study of β-tubulin mutations

Microtubules (MTs) are essential structural components of cells. They are made up of polymers of protein subunits of α,β-tubulin and are highly dynamic, undergoing rapid phases of assembly and disassembly. The dynamic behavior of MTs is essential for their cellular activities. MTs play an important role in cell survival and cell division. Since abnormal cell division is a major hallmark of cancer, MTs have become prime targets for cancer chemotherapy. The development of drug resistance in cancer cells, however, limits the success of these drugs in the clinic.

MT-targeting agents (MTAs) have been classified into two categories – drugs that stabilize microtubules against disassembly, such as paclitaxel and epothilone, and drugs that enhance disassembly of already formed MTs, such as vinblastine and vincristine. Peloruside and laulimalide are two relatively novel MTAs isolated from the marine sponges Mycale hentscheli and Cacospongia mycofijiensis, respectively. The compounds have a similar mechanism of action to the clinically useful anticancer drug paclitaxel and are effective against a number of cancer cell lines. Peloruside and laulimalide induce tubulin polymerization and stabilize MTs against depolymerization, inhibit MT dynamics and arrest cells in mitosis, leading to cell death.

Cancer cells employ multiple mechanisms to resist the action of MTAs. One of the mechanisms involves mutations in the β-tubulin binding sites of the drugs. Proteins such as tubulin consist of hundreds of amino acids linked together by chemical bonds. The β-tubulin amino acids involved in the binding of paclitaxel and epothilone have been well-studied, whereas those of peloruside and laulimalide have only recently been identified.

We used a site-directed mutagenesis approach to address the features of four β-tubulin amino acids important in the binding of peloruside and laulimalide, both for maintaining normal MT structure and for mediating sensitivity of cells to the MTAs (Fig. 1). Of the four mutations that we tested, expression of one βI-tubulin mutant (glutamine (Q) changed to methionine (M) at position 291 (Q291M) specifically increased the sensitivity to peloruside without affecting overall MT stability, since there was no significant effect on the action of the other drugs, laulimalide, paclitaxel, or vinblastine. Two other mutations − V333W (valine (V) to tryptophan (W) at position 333) and N337L (aspargine (N) to leucine (L) at position 337) led to decreased MT stability and therefore resistance to compounds that stabilize microtubules, including peloruside, laulimalide and paclitaxel. This mutation also made the cells more sensitive to the MT destabilizer vinblastine. The expression of the D295I mutant tubulin (aspartate (D) to isoleucine (I) at position 295) affected neither MT stability nor paclitaxel sensitivity, but specifically conferred resistance to peloruside and laulimalide. In addition, we found that the increased peloruside sensitivity of the Q291M mutant cells was also associated with increased ability of peloruside to induce mitotic arrest. The resistance from the two other mutations was related to a reduced ability of peloruside to exert its stabilizing effect, as evidenced by higher drug concentrations needed to produce mitotic arrest and induce intracellular tubulin polymerization (Fig. 2). 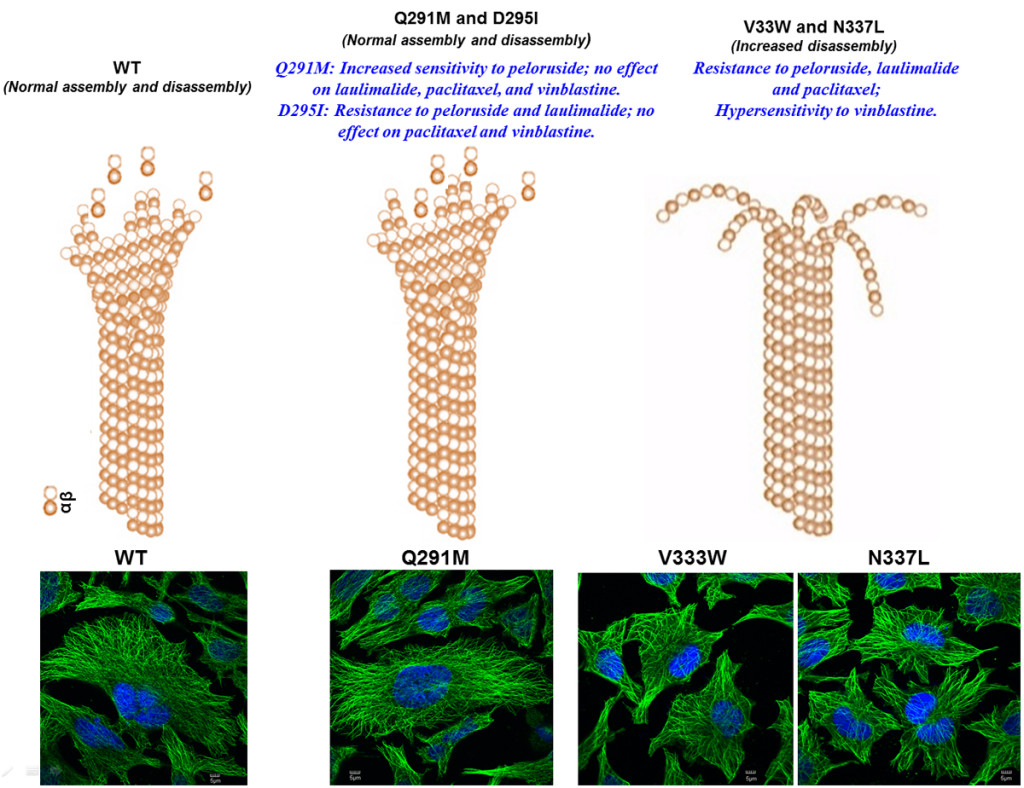 The information from this study can be used to better understand peloruside and laulimalide interactions with tubulin and the mechanisms that cancer cells employ to escape the action of MTAs such as these. The observation that the Q291M mutation increases sensitivity to peloruside highlights the potential for development of new, more potent peloruside analogues that kill cancer cells even better than the parent compound.

One Response to How cancer cells resist the action of microtubule-targeting chemotherapeutic drugs? A study of β-tubulin mutations