How do mistletoes use water in leafless hosts?

Mistletoes are parasitic plants that penetrate the bark of the hosts’ branches through a modified root, connecting to their host sap (xylem) from which they access all the water and nutrients they need to survive. The mechanism of water partitioning between hosts and mistletoes is particularly interesting, and mistletoes have been a fascinating model for investigating plant water relations since the early days of plant physiology and ecology. Previous studies have suggested that mistletoes are profligate water users, and control water loss minimally or not at all. 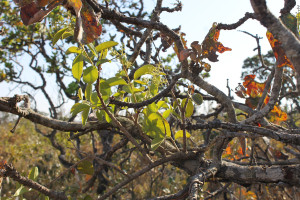 Water is very important for plant integrity maintenance and can be very limiting, especially in seasonally dry habitats. The Neotropical savanna in Central Brazil (known as Cerrado) is characterized by strong climate seasonality, and the rain is completely restricted to the wet season. During the dry season, Cerrado plants are subjected to strong water deficit, adopting distinct strategies to cope with it. Deciduous species completely drop their leaves during the dry season, thus eliminating water loss by leaf transpiration. Evergreen species retain a full canopy and exert strong stomatal control over transpiration. Stomata are the pores on the leaf surface that permits gas exchange (water vapour and CO2) between the inside of the leaf and the environment. By controlling the stomata aperture, plants can ensure the balance between carbon uptake and water losses. Carbon is needed for photosynthesis, the process by which plants acquire energy to grow and reproduce.

This study was motivated by the observation that the same species of mistletoe, Passovia ovata, can parasitize both deciduous and evergreen plants. How would mistletoes behave in a leafless host? Would they suffer more stress compared to a mistletoe on an evergreen plant? We collected physiological measurements during the peak of the dry and wet seasons. We also collected leaf stomata anatomical traits, such as stomata density and stomata dimensions to verify if the host can influence mistletoe leaf anatomy.

We found that Passovia ovata showed distinct water use strategies depending on the host. During the dry season, mistletoes on the deciduous host lost twice more water for a given carbon gain compared to mistletoes on the evergreen host. There was no difference in the wet season, suggesting that this behaviour is associated to the host’s leaf absence. We suggest that by not having to compete for water with hots’ leaves, mistletoes could behave more wastefully. The differences were also reflected in leaf stomata traits, where mistletoes attached to the deciduous host showed less and wider stomata than on evergreen hosts, which is typical of plants suffering less intense drought stress.

Interestingly, even maintaining stomata more open compared to the host plant during the day, mistletoe and host stomata behaviour were coupled, meaning that whenever host closed their stomata, mistletoe did the same, independently of the season or the host. This behaviour might be essential for this specific parasite-host relationship, to avoid host death and keep the parasite alive for longer.

Those are very interesting and exciting results, because they add knowledge to various different areas in plant ecophysiology. First, it shows that deciduous plants vascular system functions normally during the dry season, allowing mistletoes to remain with a full canopy even when hosts are completely leafless. Second, this study is the first to provide evidence that anatomical and physiological differences occur in mistletoes growing on different hosts, favouring generalist mistletoes to use a greater range of hosts. And third, it shows that mistletoe and host diurnal courses of stomatal aperture were coupled, suggesting that mistletoes regulate water loss, at least to some extent, probably to avoid host mortality.