How do neurons develop and regenerate?

Identifying how neurons form a functioning network provides the background for knowing how to manage, treat, and prevent neurological disorders, as well as promote healing after injury to the nervous system. NICHD researchers uncovered a new pathway that explains how neurons grow and branch out. In a recent study, they show that a molecule called neurotrophic factor-α1 (NF-α1) can promote growth by regulating known growth factors called Wnt-3a and Wnt-5a. 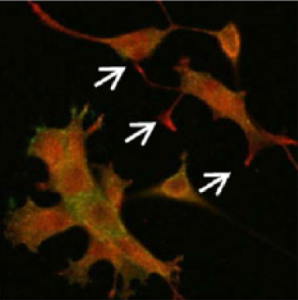 While NF-α1 (also called carboxypeptidase E or CPE) is not a new molecule, previous studies suggest that it influences the ability of neurons to form projections called neurites, retract, and make connections with other neurons. Because a different set of molecules, namely Wnt-3a and Wnt-5a, are known to control these processes, the study team explored whether or not NF-α1 regulates these Wnt proteins. The team studied cells from mouse and rat models that are commonly used to learn how neurons form projections and grow.
The study team discovered that NF-α1 does regulate Wnt-3a and Wnt-5a, and these interactions are summarized in three main points. First, Wnt-3a is known to inhibit neurite outgrowth caused by nerve growth factor (NGF), but the researchers found that NF-α1 prevents this outcome, allowing neurites to grow despite the presence of Wnt-3a. Second, Wnt-5a is known to promote neurite outgrowth, and the team showed that, in some cases, NF-α1 stimulates additional growth. Third, they also found that NF-α1 and Wnt-5a directly interact to form a complex. The researchers suspect that this complex encourages the accumulation of a protein called adenomatous polyposis coli (APC) that is required for a neuron to form projections.
While more research is needed to expand these results, the study provides new ideas on how to stimulate neurite outgrowth, which can be applied to the treatment of neurological diseases or the healing of neurons damaged by injury or infection.