How does your brain control interference from irrelevant information?

Given the continuous flux of visual information that competes for our attention in the everyday world, some form of attentional selection is needed to allow us to focus on what is relevant and ignore distracting information. This is especially critical in situations involving conflicting stimuli where designated target information is in conflict with rival non-target information. In selective attention experiments, the efficiency of processing simultaneously presented target and distractor stimuli in a given task display is often influenced by the relationship these stimuli have with those in the previous display. The processing delay, that occurs when a to-be attended target in the current (probe) display matches the ignored, non-target distractor on a previous (prime) display, is called the negative priming (NP) phenomenon. The current four experiments investigate NP using a mixture of stimulus types (letters, digits, English number words, and logographic Chinese number words) which are presented in two rapid serial visual presentation (RSVP) streams.

Fig. 1. This figure shows a sample sequence of items in a prime stream (on left) and probe stream (on right) for an Ignored Repetition (IR) condition (top) and Control condition (bottom). Participants are always required to respond to the target black numeral and ignore the non-target, conflicting red numeral. The numeral can be verbal in the form of a word, or in the form of a number. For IR condition in this example, note that the red distractor (四) in the prime stream is the Chinese word for FOUR. If the probe response to the English word FOUR in the probe stream is delayed, compared to the Control condition, that cost would indicate negative priming between different languages. The timing of each event in the stream is also shown in milliseconds (ms). Each item appears sequentially in the middle of a computer screen.

In this RSVP-NP task, prime and probe trials each consist of a stream of stimuli presented sequentially in rapid succession at the same location, and the relationship between the distractor in the prime trial and the target in the probe trial is systematically manipulated. Because the prime distractor and the probe target appear at the same spatial location, it allows researchers to study how target selection is accomplished when the target and distractor overlap spatially, but are separated temporally (Figure 1 shows an example of stimuli displays from one of the experiments, and Figure 2 shows the results). In Experiments 1 and 2, the target and distractor within each trial were either two digits or two number words, whereas in Experiment 3 two different representational forms were used (digits and logographic Chinese number words). In Experiment 4 a cross-language manipulation with Chinese-English bilinguals was used and prime distractors and probe targets switched from a subject’s dominant (Chinese) language to their non-dominant (English) language to investigate bilingual visual-linguistic control mechanisms. 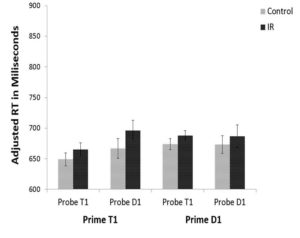 Fig. 2. The black bars show a consistent response time delay in the Ignored Repetition (IR) condition, compared to the Control condition. This clearly indicates that regardless if the non-target distractor item appears before or after the target item in the prime stream or the probe stream, there is always a reaction time cost. This delay represents the negative priming effect.

The results from all of these experiments show the robustness of NP under RSVP by extending the finding of NP using different semantically related stimuli in the prime and probe streams. It is noteworthy that the ignored non-target competing item in the prime stream is only associatively related by meaning when it becomes the sought after target in the probe stream. The impairment of responding to it is of particular importance for understanding the mechanisms the brain uses to process distracting information.

The main discovery here is that there is an opposing flipside to accessing wanted information. The new mechanism revealed by our research inhibits unwanted information to the extent that the suppression leads to closely associated concepts in one’s mind becoming less accessible than if something similar to it had not recently been encountered in the prime stream. This even happens between translations of concepts across different languages. These remarkable findings are also in total agreement with brain cell recording research that has begun to address the neural substrates underlying target and distractor processing. This brain cell research suggests that participants control neurons representing targeted items independently of those representing non-target objects by enhancing the firing of neurons that have a preference for the target, while actively inhibiting or suppressing those that encode the non-target. The lingering effects of the neuronal inhibition of distracting information, which enables us to efficiently focus on essential relevant information, can be seen in our paradoxically slower processing and responses when the irrelevant distracting information suddenly becomes relevant.