Fungi are nature’s paradox. They are both good and bad for humans. They are good because they provide a treasure trove of medicines used to fight bacterial infections and lower cholesterol. They are also good because when they ferment, they give us delicious drinks such as beer and wine. However they are a nuisance to us because they affect our agricultural food sources, ruining them for consumption, and give us terrible infections when our immune systems are weak. Understanding how fungi metabolize is important for unlocking the ways in which they break down hosts and absorb nutrients for their own growth. 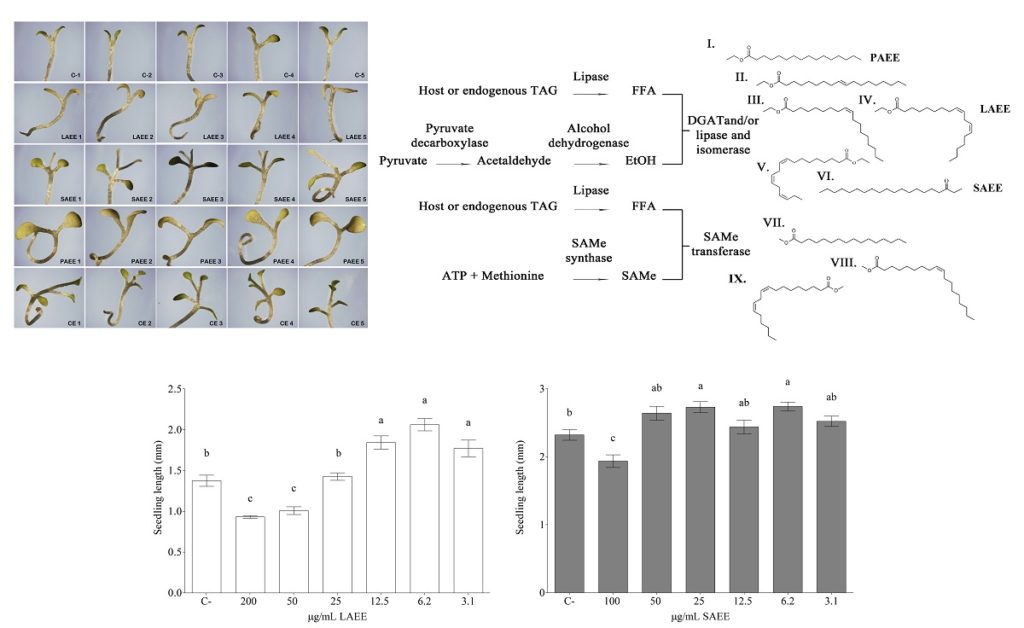 Some of the most abundant food sources for fungi in plants are starch and fats. Starch is stored throughout a plant, and fats are found in all cellular membranes (phospholipids, etc.) as well as stored in the form of oil (triglycerides) in seeds and tissue. Fungi have special proteins called lipases that are able to “free” fatty acids from their storage form, and many other proteins that are involved in biotransforming these into physiologically active compounds.

When we think of fermentation, we often think of beer or wine, a job done by yeasts. However, fermentation is a part of many filamentous fungi’s ability to survive inside a host, also producing ethanol, a compound known for its toxicity. Fungi have enzymes called pyruvate decarboxylase and alcohol dehydrogenase that are involved in converting glucose (from starch breakdown) to ethanol. Lipases are also able to chemically attach ethanol to fatty acids, forming a class of important molecules called fatty acid esters.

Fatty acid esters are known to be toxic to humans. After drinking alcoholic beverages, ethanol is metabolized by our liver to acetaldehyde. However, our pancreas can also metabolize excess ethanol by linking ethanol to free fatty acids from food, much like fungi do, with pancreatic lipases. This causes pancreatitis, which causes cell breakdown in the form of necrosis, known to be specifically caused by certain fatty acid esters such as ethyl palmitate.

However, fatty acid esters have important ecological roles in nature. They are insect pheromones, for example, bees produce them to signal bees to change physiologically from nursers to foragers. But what do these do to plants? In our study, we found that the highly phytopathogenic tree fungi Lasiodiplodia theobromae and Neofusicoccum parvum (Botryosphaeriaceae) are able to produce a wide variety of fatty acid esters, including ethyl linoleate and ethyl stearate. When we tested the effect of these two in tobacco germination, we found that they inhibited growth at high concentrations and increased growth at very low concentrations, leading us to propose a role for these compounds in germination and early growth. We also checked to see if a non-pathogenic fungus Trichoderma asperellum produces these compounds. Our results showed L. theobromae and N. parvum produced a wider variety of and significantly more of the physiologically active fatty acid ester ethyl linoleate than the non-pathogen. Ethyl stearate was not detected in the non-pathogen, indicating these compounds may be part of fungal pathogenicity, differentiating pathogens from non-pathogens in the way plant or animal fats are transformed. Certain fatty acid esters have been extracted from plants like garlic, and the purple shamrock. There is controversy as to whether these compounds are produced by the plant itself, or by a hidden fungus within the plant. There is evidence that plants are able to produce ethanol on their own, especially during flowering, where ethanol seems to have an unknown role in the rapid growth of pollen tubes. Further research will reveal more of the effects of fatty acid esters and their potential applications in agriculture.