How leaf beetle produce toxins to defend themselves

Leaf beetles are insects that consume and destroy the leaves of the plants on which they live (host plant). Therefore, these beetles are pests of their corresponding host plant and cause economic damage, if this host plant is commercially used, e.g. in case of potato, which is consumed by potato leaf beetles.

In order to understand how these leaf beetles can survive in their environment, we study the defense of these insects against predators. Since leaf beetles are unable to defend themselves physically, especially in the larval developmental stage, this “defense” is achieved by production of poisonous chemicals within the insect. These poisons are present in the insects over their whole life cycle and in every developmental stage, namely eggs, larvae, pupae and adults (Fig. 1). 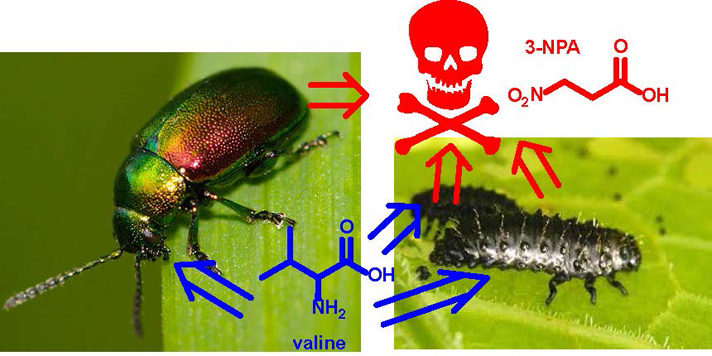 Fig. 1. Adult leaf beetle and larvae of the species Gastrophysa viridula on leaves.

Some species of the big family of leaf beetles (contains >2000 species) produce toxic compounds that are even dangerous for humans, because they cause chronic neuronal diseases. These poisons are produced in high amounts in leaf beetles, and thus have to be stored in a form, which is non-toxic for the insect itself, but is able to release the toxin upon predation.

We are interested in the chemical processes that proceed when these defensive chemicals are produced by leaf beetles. In our publication we describe on which route these leaf beetle toxins are produced. The biochemistry was studied with the larvae of these insects. In this life stage it is easily possible to inject “labeled” compounds into the insect´s hemolymph (the blood) or to feed these compounds to the larvae, followed by analysis of the subsequent produced toxins. After injection or feeding of precursors, we found that the toxins are produced from amino acids, e.g. valine and β-alanine. Usually these compounds are taken up by feeding on their host plant leaves.

The ingested leaf material is then digested, meaning that all the molecules within the leaf are “chopped” chemically into smaller fragments such as amino acids like valine. A certain part of these “chopping” products are then transformed within the insect to the final toxins. A very interesting and important finding of our study is that the poisonous compounds derive from essential amino acids, which means amino acids that cannot be produced by the organism, and thus have to be taken up from the food. Since essential amino acids cannot be produced by the organism, these compounds are of high value, and hence it is remarkable that these valuable substances are used to produce high amounts of compounds that are advantageous only in case of predation. With this novel information provided by our study, we can now address further questions. For instance, which genes are responsible in the insects for production of these toxins and what are the bio-catalysts (enzymes) that enable the (bio-) synthesis of these compounds, especially of the relatively rare nitro group. The (recombinant) production of these enzymes can be of interest especially in terms of biotechnological use, e.g. to produce biologically derived catalysts for industrial chemical processes. Furthermore, the biological impact of certain small molecules produced by leaf beetles in this context is unknown. To make medicinal or other use of such compounds it is of high interest to further study their chemical and biochemical formation and their properties.