How preparation to touch or grasp alters visual size perception

This paper, recently published by my colleagues and I, summarizes a series of studies on how engaging in particular actions affects how our brain processes incoming visual information. Specifically, illusions that exert a strong effect on our visual processing are significantly weakened if you are preparing to reach out and grasp a target. Our visual processing for controlling actions seems to be more accurate than that which guides our casual observation of the world around us. We found the same to be true even if participants in the study just imagined reaching. It seems that preparing to act on a display changes what the actor sees. What you see depends a lot on what you are planning to do. 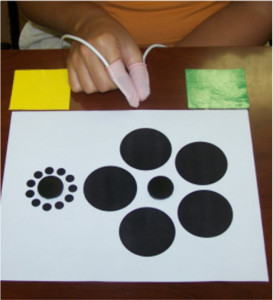 Across several experiments, we asked participants to view two thin, plastic disks on a table and select which of the two seemed larger. In some cases, the disks were presented on a plain background. In others, the disks were surrounded by arrays of small and large disks that induce the Ebbinghaus illusion (Fig. 1). When the two disks are the same physical size, the disk surrounded by the small circles appears larger. If the diameter of the disk surrounded by the large circles is increased in size by about 10%, this compensates for the illusion. Now when people view the two central disks, even though they are physically different sizes, they appear to be equal.

This 10% magnitude of the Ebbinghaus illusion has been found by many researchers in tasks for which participants indicate their perceptions with an overt, conscious, typically verbal response behavior. My colleagues and I have repeatedly found that if study participants make the same judgment about the disks–which is larger–but then indicate their choice by reaching out and picking up the target, the effect of the illusion is substantially reduced, typically by about 40%.

It is as if preparing to act on a display engages a separate “mode of processing” (MoP) associated with the reaching action. Our continuing work is exploring the dynamic characteristics of this grasping MoP and searching for the presence of other MoPs that may accompany other actions, such as walking, driving, throwing, and hitting. Human perception seems to be much more variable in how it processes information than has been previously thought.

In general, we suspect that a lifetime of development and learning shapes our visual systems to gather the information that is most important to controlling different task behaviors, enabling accurate performance in a wide range of different actions that we need to perform each day.