How to measure maximum animal performance

Scientists are often interested in the performance capabilities of animals, measuring how fast they can run or how hard they can bite. 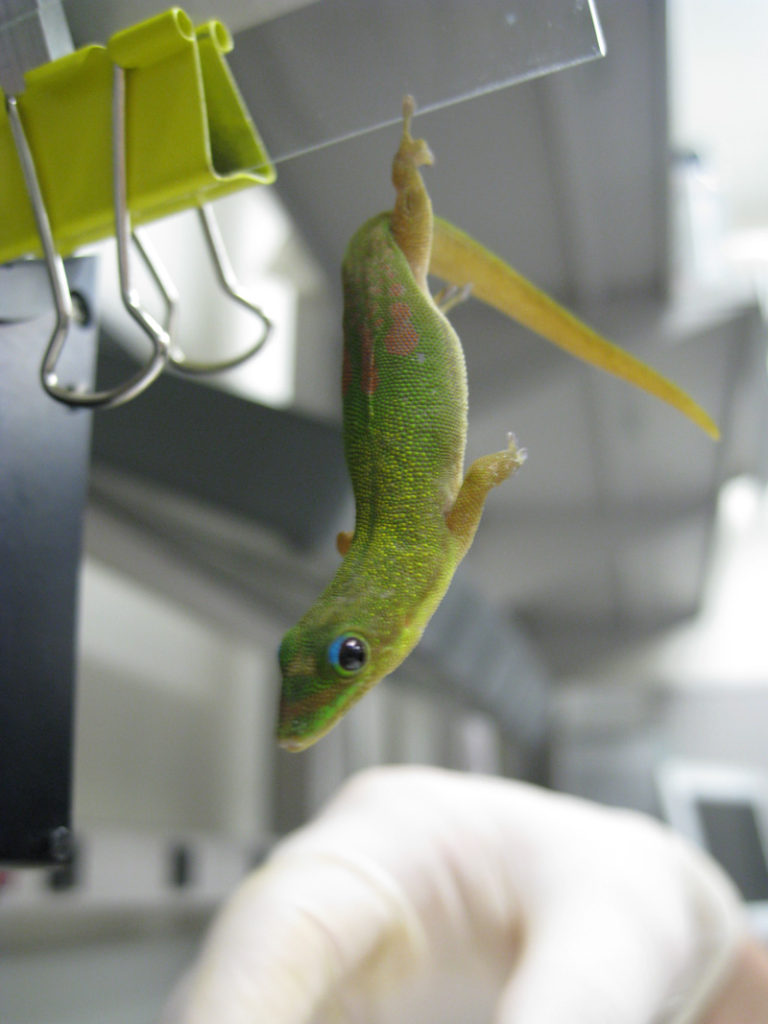 To test our new approach estimating maximum animal performance, we measured the adhesive capabilities of a gecko lizard. During our test, a lizard is suspended from a glass surface by a single rear toe via their natural adhesive properties. When the surface is near vertical, the lizard is generating predominantly friction relative to the substrate. We then slowly inverted the glass. As the glass is slowly inverted, less friction and more adhesion relative to the substrate is generated. At the maximum angle of performance, the animal falls onto a cushioned base. As a result, the angle of toe detachment quantifies the maximum amount of adhesion, relative to friction; an individual is capable of generating (See Hagey et al., 2014).

This information helps scientists understand how the bodies of different animals work and how they may be adapted to different environments. However, measuring performance, especially maximum performance, can be difficult. It is very hard know when an animal is performing at this best. Previously, scientists have tested animals over and over and just used the couple of measurements that were the best. While this way works, if there are occasional mistakes in the test that allow an animal to perform better then it should, these rare mistakes could greatly affect the final result.

In our paper, we described a new approach, which adds expectations of how the animal should perform. Using the actual measurements, the high ones and the low ones, along with the pattern of high and low measurements we would expect given the test we’re doing, we can then predict what the maximum measurement would be. This way, the conclusions are more robust and aren’t changed dramatically by a couple of unusual measurements.

To test this new method out, we estimated the maximum adhesive capabilities of a species of gecko lizard and the bite force of a species of anole lizard. This method gave us similar answers as observed in previous studies but also allowed us to predict how many tests we needed to run on each animal to get the answer we needed prior to testing. This wasn’t possible before when only using the best few measurements. With this information, future studies can be better designed for cheaper and using our approach to estimate maximum performance will help scientists better estimate things like bite force and sprint speed of wild animals. It will also help when measuring the effects of new potential drugs or other treatments.