DNA contains four bases, A, C, G and T (Fig.1). There are 3 billion of these bases in the human genome, and they code for about 22,000 genes. Because each cell carries the same genetic information – i.e. the same DNA coding for the same 22,000 genes, the developing embryo needs to have some way of specifying how one set of cells forms the liver and another set forms the brain. The mechanisms involved in this cell type specification are termed “epigenetic” because they are layered above or upon the genetic information. Epigenetic changes normally occur during embryonic development and in response to signals from the environment, but they become seriously dysregulated in cancer cells. 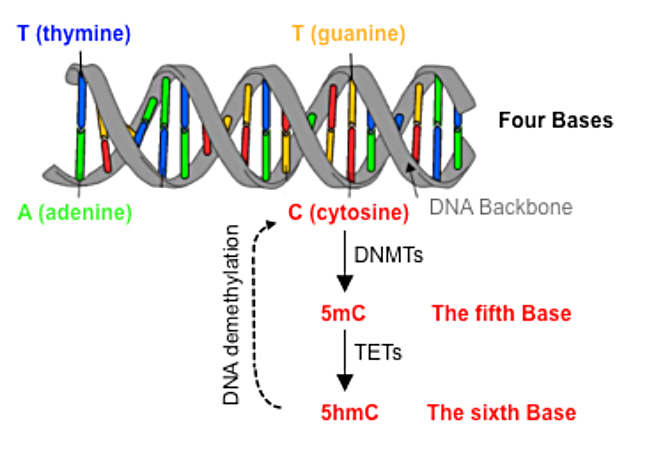 A major type of epigenetic modification involves the DNA itself. A methyl group can be attached to the 5th position of cytosine to yield 5-methylcytosine (5mC), informally known as the “fifth base” of DNA. The methyl groups are added by a family of three enzymes known as DNA methyltransferases (DNMTs), but how the methyl groups are removed remained a puzzle until the discovery in 2009 of the TET family of enzymes – TET1, TET2 and TET3. TET enzymes successively oxidize 5mC to yield 5-hydroxymethylcytosine (5hmC, the “sixth base” of DNA) and other oxidized derivatives that are intermediates in DNA demethylation (Fig.1).

In our paper we show that Vitamin C activates TET proteins, and that TET proteins in turn augment the function of a specific class of T cells of the immune system known as “regulatory” T cells. Normally, activated immune cells protect the organism in which they reside by attacking and destroying bacteria, viruses, cancer and other pathogens (“good outcome”, Fig. 2A). However this process sometimes goes awry, causing the activated cells to turn against and attack healthy cells in their own host. This aberrant behaviour is often the root cause of autoimmune diseases including type I diabetes, multiple sclerosis and rheumatoid arthritis (“bad outcome”, Fig. 2A).

Regulatory T cells would not exist without a “master” protein known as Foxp3. Indeed, the rare humans born without Foxp3, or with a mutation in Foxp3, succumb in infancy to a raging autoimmune disease that affects numerous organs including the skin, gut and liver. Even in normal people, Tregs lose Foxp3 and become less effective at suppressing unwanted immune responses as they proliferate and age. We found that by activating TET proteins, Vitamin C prevents the loss of Foxp3, thus maintaining Tregs in a highly active form. The active TET proteins promote demethylation of a regulatory DNA region within the Foxp3 gene; this ensures that Foxp3 expression is stably maintained at high levels and that Treg suppressive function remains high (Fig. 2B).

Fig. 2. A, Conventional T cells kill bacteria, virus and cancer cells, but at the same time may attack healthy cells in the body. Tregs maintain the balance of the immune system, by not only preventing the destruction of pathogens and cancer cells, but also suppressing autoimmune attacks on the body’s own healthy cells. B, A working model for how TET proteins regulate the stability of Foxp3 expression and therefore Treg function. Tregs lacking TET proteins easily lose Foxp3 expression and have poor suppressive function. In contrast, Tregs whose TET activity has been enhanced by Vitamin C have very stable Foxp3 expression and superb suppressive function.

From a clinical point of view, if Tregs could be generated in cell culture and infused back into patients, it might be possible to prevent autoimmune diseases as well as rejection of transplanted organs such as heart or liver. However, Tregs generated outside the body in this way rapidly lose Foxp3 expression and so are ineffective in patients. In our paper, we showed that Vitamin C could also prevent the loss of Foxp3 in Tregs generated artificially in cell culture. Overall, our data suggest that targeting TET enzymes with small molecule activators such as vitamin C might increase Treg efficacy in clinical applications such as transplant rejection and autoimmune disease.