The major function of the lung is to enable ambient oxygen uptake (essential for life) and eliminate carbon dioxide (a waste byproduct of metabolism) from the body. Surfactant protein A (SP-A), is a protein found in the lungs and provides the first line of defense by helping to fight intruders such as viruses, allergens, and pathogens in the lungs and modulate inflammatory processes within the lung, as well as, along with other surfactant proteins and lipids prevents lung collapse by enabling the small bubble-like structures of the lungs (alveoli) to remain open (and not collapse) during the respiration process. Because altered levels of SP-A are associated with a number of lung diseases, it is important to understand the mechanism as to how the levels of this protein are regulated. The insight gained may provide opportunities to intervene and restore SP-A levels under different disease conditions and thus restore SP-A-mediated functions of the lung. 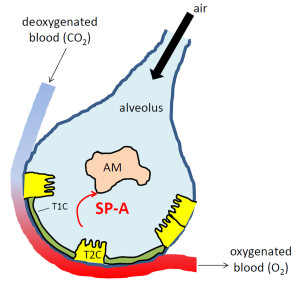 Fig.1. The alveolus is a small bubble-like structure in the distal lung where the by-product of metabolism (carbon dioxide-CO2) is exchanged with the essential for life ambient oxygen (O2). Epithelial Type I cells (T1C) along with Type II cells (T2C) cover the surface of the alveolus. Although the T1C are approximately half the number of T2C cells they cover >95% of the alveolar surface because there are very thin with a surface area about 25-30 larger than the T2C. Their structure is suitable to carry out the CO2/O2 exchange. T2C produce a lipoprotein complex called surfactant with the surfactant protein A (SP-A) being one of the surfactant proteins. SP-A along with other surfactant proteins and lipids, prevents the alveoli from collapsing, enabling them to carry out the essential for life function (the CO2/O2 exchange) during the respiration process. SP-A also through its interaction with the alveolar macrophages helps fight intruders such as viruses, allergens and pathogens.

However, in humans (unlike rodents) there are two genes that lead to the production of two similar but yet distinct proteins SP-A1 and SP-A2. These proteins have been shown to differ in function and their individual amounts have also been shown to differ in certain diseases such as asthma, cystic fibrosis and infection. In light of their functional differences it is important to understand their regulation in order to identify points of intervention to differentially modulate (as it may be needed under different conditions) the protein levels of SP-A1 and SP-A2, and consequently restore SP-A1 and SP-A2 functions to healthy levels. In our studies we have found that the SP-A mRNA, the molecule that leads to the production of SP-A2 protein contains a regulatory element that we call Exon B (eB). This element is present in the SP-A2 mRNA and absent in SP-A1. Based on our data eB interacts with a group of proteins called 14-3-3. The 14-3-3 protein family includes seven different types (isoforms) shown by other investigators to play an important role as adaptive molecules, regulating a number of functions of the cell. In the present study our goal was to determine if the interaction of eB with the 14-3-3 is direct or not. We focused on this family of proteins because in general 14-3-3 proteins appear to regulate SP-A2 and not SP-A1 and as such may hold the potential to differentially manipulate SP-A2 levels as needed. To investigate this we employed a number of approaches including one known as shift assays where lung protein extracts or purified 14-3-3 isoforms were mixed with the eB under certain conditions to determine whether the individual 14-3-3 isoforms bind eB directly. Then we used additional approaches to confirm the findings. We found that 6 out of the total 7 isoforms (β, γ, ε, η, σ, τ) bind directly the eB RNA and only one, isoform ζ, did not bind eB. This is consistent with the results of another key experiment where inhibition of each one of the 14-3-3 isoforms (except ζ which was shown not to bind eB) had a negative effect on SP-A2 levels but not on SP-A1 (except isoform σ that affected both).  Our collective findings demonstrate that 14-3-3 proteins not only play a regulatory role in the levels of SP-A2 but appear to be key proteins as these interact directly with the SP-A2 RNA. Thus isoforms of the 14-3-3 family of proteins could potentially be used as targets to fine tune SP-A2 expression in various disease conditions and restore its corresponding functions to normal levels.