Gray’s revised reinforcement sensitivity theory (rRST) of personality postulates three main systems: the behavioral approach system (BAS), the fight-flight-freeze system (FFFS) and the behavioral inhibition system (BIS) which govern the two motivational systems. This theory has attracted substantial interest from researchers across various areas of psychology. Past research links greater relative left frontal activity with BAS-related tendencies and impulsivity. Other research links avoidance motivation (BIS) with greater relative right-frontal activity, although the relation of withdrawal motivation with greater relative right frontal asymmetry has been mixed. Although rRST has addressed the separation of FFFS and BIS, much of past personality neuroscience research used Carver and White’s (1994) original BIS scale which does not provide separate measures of BIS-anxiety and FFFS-withdrawal. 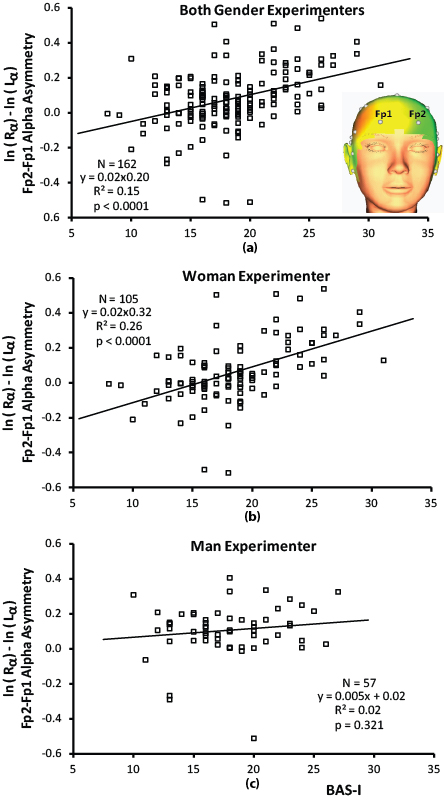 This limitation has not allowed previous work to detect which of the two systems is related to the right-frontal activity (see Neal & Gable, 2017). We administered the Reinforcement Sensitivity Theory of Personality Questionnaire (RST-PQ; Corr and Cooper, 2016) to measure the BAS and its facets (Goal-Drive Persistence, Reward Interest, Reward Reactivity, and Impulsivity), BIS, and the withdrawal FFFS. The aim of this study was to examine the association of RST-PQ traits with resting electroencephalogram (EEG) alpha-asymmetry in right-handed female participants (N = 162) by considering the influence of experimenter’s gender. In the total group, that included two subgroups with experimenters of different gender, BAS-impulsivity was related to the greater left- than right-frontopolar activity (Fig. 1a), and FFFS, but not BIS, was related to greater relative right-frontocentral activity (Fig. 2a). These associations remained significant for the subgroup with a young same-gender experimenter (N = 105, Figs. 1b and 2b), but not with the opposite-gender experimenter (N = 57, Figs. 1c and 2c). We conclude that in the association of resting frontal activity and personality traits, much of the variance is a result of trait influences, and the remaining variance is at least partially dependent on features of the experimental situation as the gender of the experimenter. This conclusion appears in line with previous findings obtained by Hagemann, et al. (2002), which showed that 60% of the variance in resting frontal activity is a result of trait influences, and 40% of the variance was due to occasion-specific fluctuations. 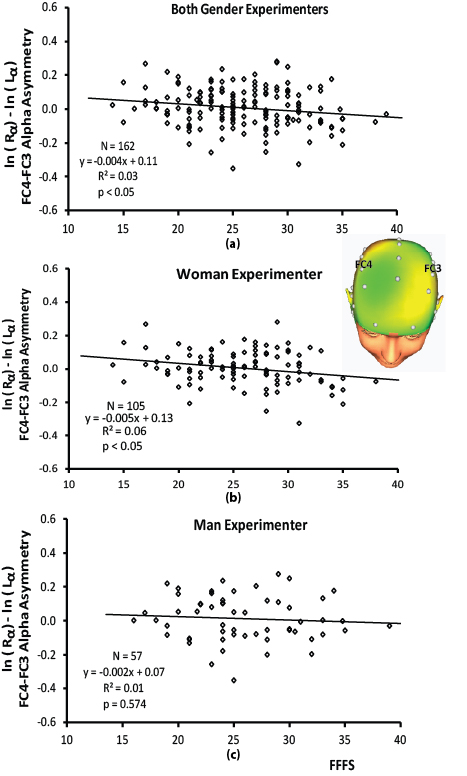 Finally, it is important to note that our observations of robust personality-hemispheric asymmetries in the presence of the same-gender experimenter but not in the presence of opposite-gender experimenter appear in line with previous observation provided by Kline et al. (2002) and Wacker et al. (2010) suggesting that individual differences in affective tendencies are dependent upon the interaction between the situational context and the innate capabilities of the individual.