A lot of studies have demonstrated that oxidative stress plays a central role in the pathophysiology of Parkinson’s disease. Antioxidant therapy has been proposed for prevention and treatment of neurodegenerative diseases for reducing oxidative damage caused by the disease and medication. Despite the growing number of studies, present clinical trials have not yet found antioxidants for effective treatment of this neurodegenerative disease. Our study draws attention to new sources in looking for suitable antioxidants against oxidative toxicity of L-dopa drug clinically used in PD therapy. By a number of studies, was shown that natural polyphenols and terpenes contained in Rose and Lavender oil may have a protective effect on a number of pathologies including neurodegenerative diseases. Neuroprotective effects of many polyphenols and terpenes are due to their ability to cross the blood-brain barrier and directly to scavenge the chelated transition metal ions and ROS/RNS in pathological concentrations and to exert antioxidant effects into brain. 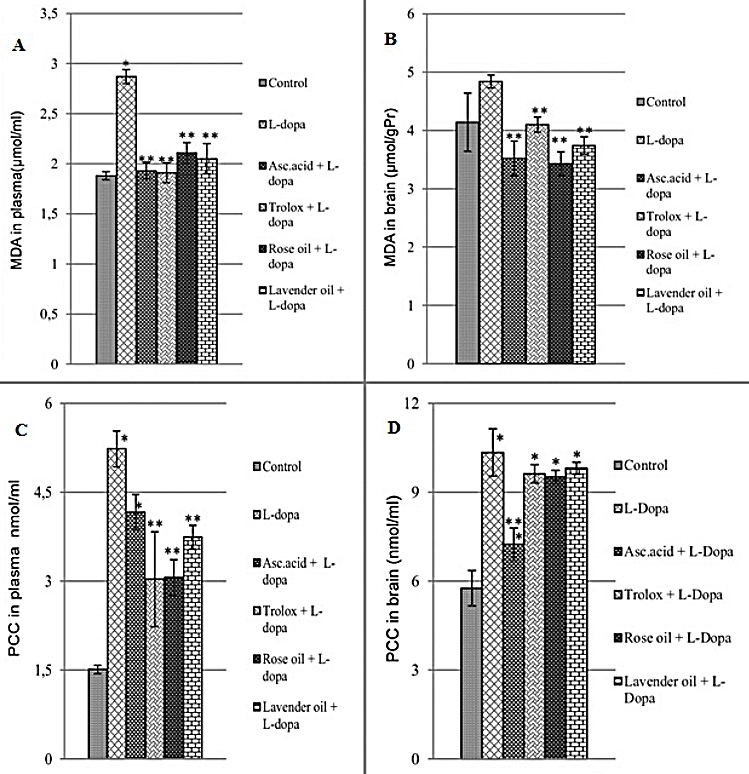 The aim of the current research and above mentioned properties of natural essential oils led us to selected Rose and Lavender oil isolated correspondingly from Rose damascena Mill. and Lavandula augustifolia plant cultivated in Bulgarian climatic and soil conditions. In this study an experimental model of healthy mice was used to evaluate the influence of L-dopa acute treatment on some boimarkers of oxidative stress, namely malondialdehyde (MDA), protein carbonyl content (PCC) and NO measured in the plasma and brain tissue mice. We also investigated and compared protective effects of Vitamin C, Trolox, Rose and Lavender essential oil against oxidative toxicity induced by L-dopa.

The significantly higher levels of MDA and PCC measured in plasma and brains of drug treated mice comparing to controls show that L-dopa administration provokes oxidative processes in plasma and brain tissue which might be a result of increased ROS/RNS production during drug metabolism (Fig. 1A-D). In order to confirm reactive radical species are involved in oxidative damages to lipids and proteins we applied indirect Electron Paramagnetic Resonance (EPR) spectroscopy and studied the levels of NO in plasma and brain tissues of tested mice. Using Carboxy.PTIO as a spin trapping agent we demonstrated significantly higher levels of NO in plasma and brain of L-dopa treated mice comparing to controls. The observed multiple increasing of NO in the treated mice, relative to controls, suggests that at the time of study run and/or have taken place oxidative processes (Fig. 2A-B), which coincided with the elevated levels of end oxidative products of lipids (Fig. 1A-B) and proteins (Fig. 1C-D). Identified increased levels of NO in plasma and brain of L-dopa treated mice were not surprising because many authors reported correlations with the severity of the Parkinson’s disease and the levels of NO measured in serum or cerebrospinal fluid of PD patients continuously treated with L-dopa. A considerable reduction in the levels of all studied biomarkers was found when the mice were pretreated by any of antioxidants in comparison with mice treated with L-dopa, alone (Fig. 1 and Fig. 2).

Fig. 2. •NO radicals expressed in arb. units in plasma of control mice, mice treated with L-dopa and with antioxidants + L-dopa.

Best of our knowledge this is the first in vivo study of the effect of acute treatment with L-dopa whereby are monitored and compared OS biomarkers providing data about both the course of oxidative processes in real time (NO) and levels of OS end products (MDA and PCC) measured in plasma and brain tissue of tested mice. It must be emphasized, that both essential oils expressed in vivo almost the same behavior with that of the classical antioxidants vitamins C and Trolox, which makes them potential candidates for further research to their possible use as protectors against oxidative toxicity triggered by drug therapy of neurodegenerative diseases.