A virus at work: Let us assume that you are a virus that just infected a cell (the HOST CELL) of an individual (the PATIENT). What is your vicious objective? You want to make copies of yourself as many as possible in order to infect other cells of the same patient and, subsequently, similar cells in other individuals. Do you have the appropriate tools? No, you just put only your genome inside of the HOST CELL. Fortunately, the HOST CELL has tools and you have to tell the HOST CELL what should be done with high priority. So you say “Please read my shopping list”. The docile cell reads the viral genome and translates the messages into enzymes, which constitute the workhorses for virus propagation. One of these enzymes is the viral polymerase responsible for copying the shopping list (genome). The circle is closed now: production of shopping lists and viral stuff goes on and on, until the HOST CELL cannot keep it inside any longer. Once outside the HOST CELL, the army of virus clones infects other cells and, subsequently, other patients. 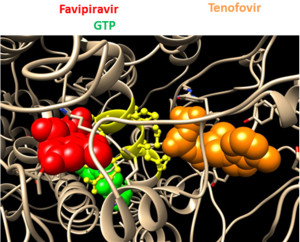 A viral polymerase makes copies of a viral genome: A viral polymerase has (I) to bind nucleotides, (II) to identify them (ATP, CTP, GTP or UTP) and (III) to tack them up nucleotide-by-nucleotide in the growing chain complementary to the template genome sequence (UTP, GTP, CTP or ATP). These nucleotide building blocks are part of the HOST CELL’s furniture. At these three stages, the viral polymerase can be cheated by administration of nucleotide look-a-likes called nucleotide analogues or simply drugs. For instance, a drug is erroneously bound, recognized and incorporated like a “bona-fide” nucleotide, but lacks the capability to become linked to the next nucleotide during the tacking process. So, the growing chain stops growing and cannot be completed into a new-made, functional viral genome. Firstly however, any drug irrespective of its antiviral activity has to be bound by the polymerase. As long as the binding site of polymerase is occupied by a look-a-like nucleotide, the site cannot be used for the binding of a natural nucleotide. Hence, the viral polymerase is inhibited to produce regular amounts of intact viral genomes and virus propagation decreases.

Nucleotide/drug binding by ebolavirus polymerase (Epol): The sequence of Epol has been determined, but its 3D-structure is unknown. It is the Epol structure not its sequence that binds nucleotides and/or drugs. Therefore we constructed a 3D-model of Epol’s structure based on the notion that identical enzymatic activities – binding, identification and polymerization of nucleotides – are promoted a great deal by similarity between structures of different viral polymerases. Also, we edited the 3D-structure of drugs into the bio-active conformation as available for the natural nucleotides. Now that we have these structures at our disposal, we can build complexes of Epol with nucleotides and/or drugs, a computer process called docking. Subsequently, we can measure the binding strength (interaction energy or affinity) between the components of a complex, a tool to select the most stable (Top 1) complex. A low (or highly negative) value for interaction energy reflects a high affinity of the partners in the complex. Now we are in business: select the drugs or combination of drugs that are able to reduce significantly the binding strength between Epol and the natural nucleotides.

Indeed, it takes two to tango, but the combinations are not equally effective. Take a look in the table at the bottom three lines. ATP, CTP, GTP or UTP binding values mostly are between about -8 and -11 close to values without drugs present. In contrast, the top 3 lines display significantly lower affinity values (-5 to -8, approximately) for nucleotide binding in the presence of two drugs.

In conclusion, if you want to inhibit ebolavirus polymerase by means of drug administration and thereby attain a decreased ebolavirus propagation, it is a well-educated guess to try the top 3 instead of the bottom 3 combinations of nucleotide look-a-likes.