For its structure and function, the human gut can be considered as a barrier hub wherein the outer environment (comprising the huge antigenic contents of the gut microflora – the well-known microbiome populating the gut lumen with some 10 14 bugs) comes in vicinity with the inner sterile milieu, with the scene being patrolled by an army of white blood cells. As a rule, the sealing colonic epithelium prevents an inflammatory clash between   the cell army and the bugs. Balance is however fragile, and at any single moment myriads of calls to initiate inflammation are conveyed onto the gut switchboard.  The chief mission being “preserve tissue integrity”, the system password is “abort the call” in a triple strategy:  1) lead inflammatory cells to die out (apoptosis, Fig. 1). 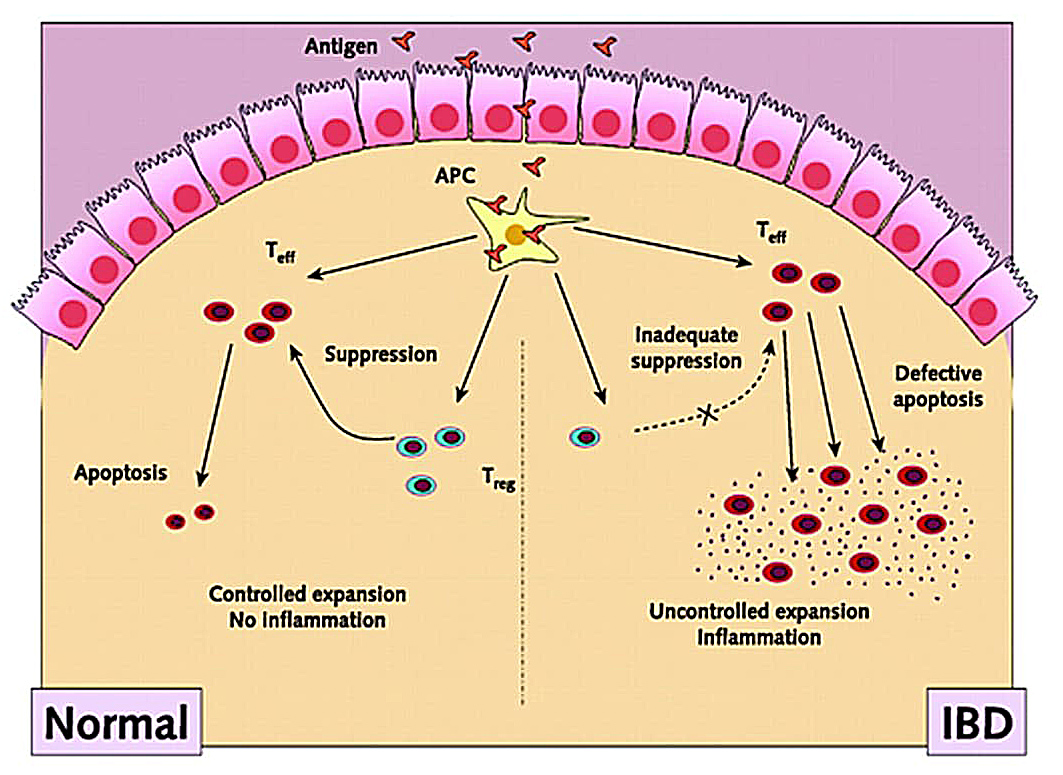 Fig. 1. (see also text). In normal conditions (left-hand side) an antigenic invader eventually breaching the epithelial barrier to reach the inner milieu is taken up by an antigen-presenting cell (APC) attempting to initiate an inflammatory effector T-cell expansion. As a rule, the chain events is terminated by the action of T-regs leading the pro-inflammatory T-cells to die out (apoptosis, see text). Defective apoptosis (right hand side) depending on an inadequate T-reg function may allow cell expansion and chronic inflammation (IBD).
(Freely down-loaded illustration from Google Image under the rules of the US Copyright Clearance Center).

2) use antibodies that are unable to fuel inflammation, 3) unleash “downregulatory” white cells. However, single or concurrent events can breach the control once in a while, letting an inflammatory episode blow up. Most often, such events  include  use of an antibiotic that perturbs  the composition of gut bugs, use of anti-inflammatory drug that damages the sealing epithelia, introduction of  a protein diet favoring growth of harmful bugs. Most of the times the switchboard hangs up the receiver, making the episode self-limiting, with a few days of abdominal discomfort and occasional bloody diarrhea affecting the patient. Occasionally, the gut switchboard may let an extend call request sneak through the filters. In these cases, genetic faults often impact the scene. Those are the factors that may turn the “abort call” into an extended call, and, out of the metaphoric language, make gut inflammation become chronic, and manifest as inflammatory bowel disease (IBD). Most of these variants do induce a state of “immune deficiency” wherein inflammation is allowed to become chronic because of failure to clear the inciting agent (so-called knock-down mutations of Crohn’s disease), whereas a few other knock-in mutations maintain gut activation,  preventing cells from dying out. Recent scrutiny has shown that gut inflammatory processes may also include locations out-side bowel boundaries, with our metaphoric switchboard engaged in a “long distance” call this time. Inflammation may be recruited at lung and skin levels, given that those two systems share their embryonic roots with gut. Studies have shown that, in a sort of lung-gut cross talk, IBD patients may have a higher frequency of pulmonary disease on one hand, whereas on the other hand, chronic obstructive airway disease is accompanied by IBD with excessive frequency. Interestingly, the good face of this lung-gut partnership, is that challenging the gut immune system with an otherwise allergenic substance (vaccination) can induce an unexpected tolerance to the allergen in the lung (a smart way to switch off asthma, perhaps). As to the skin, psoriasis, known for its characteristic elbow plaques, is in fact a Crohn’s disease of the skin, sustained by loss of tolerance to the skin bugs (the skin version of the gut microbiome). Growing knowledge of the IBD mechanisms at the molecular level has prompted refinement of treatment strategies now including fecal bug transplantation, stem cell infusion, introduction of engineered bacteria, and use of biologic drugs to influence the dynamics of cell elimination (the apoptosis referred to above). We are approaching the era of strategies shaped on individual profiles (personalized therapy) while the philosophy of “one-size-fits-all” is being progressively abandoned.