Innovative method for oriented and closed-packed immobilization of immunoglobulins

For enhancing the sensitivity of immunosensing techniques, both clustering and oriented immobilization of immunoglobulin G (IgG) on solid phase are crucial. Conventionally, IgGs have been immobilized onto solid phases (e.g., gold, silica) with variety of scaffold chemistries (e.g., crosslinkers, polymers, self-assembled monolayers, protein A/G, avidin, DNA). However, these strategies require invasive chemical modifications to IgGs, and neither of these strategies has yet achieved both clustering and oriented immobilization of IgGs. 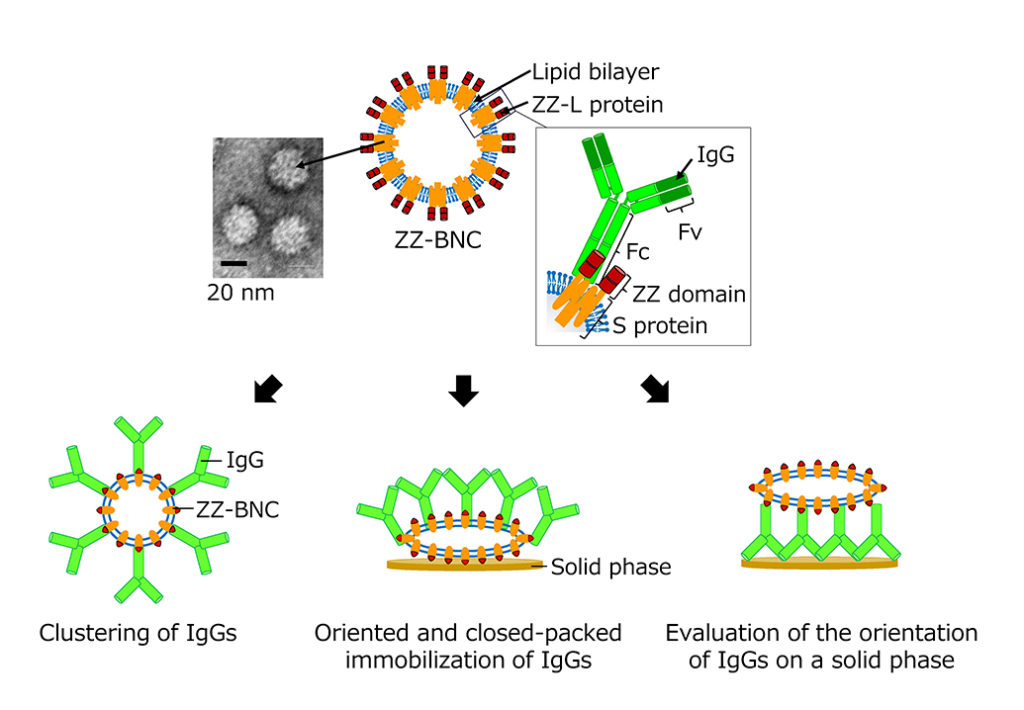 In our recent review published in Biosensors and Bioelectronics in 2017, we have presented a new scaffold ZZ-BNC, about 30-nm bio-nanocapsules (BNC) displaying ~120 molecules of a tandem form of Staphylococcus aureus protein A-derived IgG Fc-binding Z domains, which serve for both clustering and oriented immobilization of IgGs in a non-invasive manner. Major molecular functions of ZZ-BNC are described as follows.

In conventional immunoassays to detect antigens on solid phase, ZZ-BNC in aqueous phase could enhance the sensitivity by clustering IgGs and labelling molecules (enzymes, fluorophore) onto its surface. Furthermore, fluorophore-labelled ZZ-BNC could detect multiple antigens simultaneously even if by using primary antibodies derived from same host species and subclasses.

2) Oriented and close-packed immobilization of IgGs:

In quartz crystal microbalance using immobilized IgGs to detect antigens in solution, ZZ-BNC on solid phase could spontaneously and firmly adsorb onto the gold surface of sensor chips. ZZ-BNC could display IgGs on its surface outwardly as much as possible, markedly enhancing the sensitivity, antigen-binding capacity, and avidity through the oriented immobilization of IgGs. Furthermore, high-speed atomic force microscopy revealed that the IgGs underwent rotational Brownian motion relative to the ZZ-BNCs with the Fc region serving as the supporting point.

ZZ-BNC was found to recognize IgGs immobilized on solid phase in an antigen-dependent manner rather than IgGs immobilized randomly, which allowed us to measure the direction of solid phase IgGs directly. In general sandwich immunoassays, same IgG could not be used as capture and detection IgGs simultaneously. Since ZZ-BNC could bind to antigen-bound IgGs exclusively, same IgG could be used as capture and detection IgGs.