The ocean monitoring plans implemented by European countries differ widely for type of observed variables, resolution and accuracy making difficult to obtain an eterogeneous indication about the health of the European seas.

This is specially true for environmental parameters (i.e., the oxygen dissolved into seawater, the concentration of chlorophyll obtained from fluorescence measurements and the turbidity) related to the biological processes.

Innovative methodologies and procedures devoted to the intercomparison of dissolved oxygen sensors and fluo/turbidimeters were jointly developed by the National Research Council of Italy (CNR) and the Hellenic Centre for Marine Research (HCMR) with the aim to promote the interoperability between the Italian offshore observatory W1M3A and the Greek E1M3A infrastructure. Both platforms, together with the E2M3A observing system managed by the Italian National Institute of Oceanography and Experimental Geophysics (OGS), have similar characteristics and form the backbone in the Mediterranean Sea of the permanent network of moored stations for continuous monitoring of open-ocean conditions as conceived in the integrated European Ocean Observing System (Fig. 1).

Fig. 1. Map of the Mediterranean Sea with the positions of the three M3A observatories: the W1M3A in the Ligurian Sea, the E2M3A in the south Adriatic Pit and the E1M3A in the Cretan Sea.

The M3A observatories have different shape but share common technological and scientific features: the open- and deep-ocean locations, the multiple moorings scheme, the near real-time transmission of measured data, the data distribution policy and, above all, the multi-disciplinary monitoring capability which includes the near surface atmosphere down to the near surface ocean for collecting real-time bio-chemical data in the euphotic zone and the ocean interior for monitoring water masses characteristic in the upper thermocline.

In order to obtain comparable biogeochemical measurements supporting the study of processes at the Mediterranean basin large-scale, even if instruments are deployed on different infrastructures in different basins, two innovative tools were developed to intercompare the output of dissolved oxygen probes and fluorometers/turbidimeters taking into account the constraints of a real deployment (among the others, instrumental configuration, setup and kind of installation) and the local environmental conditions.

The tool developed for dissolved oxygen probes permits to check in real-time saturation and voltage output of the sensors and to enable several calibration points with different configuration minimizing the time needed for reaching steady conditions.

The simultaneous acquisitions of more sensors allowed for a real time processing and visualization of the data and, in turn, a real time comparison with reference probes and the results of Winkler titration analysis made on water samples taken at stable oxygen concentration. The tests evidenced the validity of the proposed tool also in presence of quick changes of the oxygen concentration and the non-dependence on changes of salinity and temperature (Fig. 2).

In order to quantitatively compare fluorescence and turbidity observations acquired by the W1M3A and the E1M3A observatories, an ad-hoc chamber was specifically designed. Different quantities of Chlorella culture and volume of solutions of Disodium salt form of fluorescein were tested acquiring simultaneously voltage and raw count. Test for turbidity were made progressively pouring different volumes of a Formazine primary standard at 500 NTU. 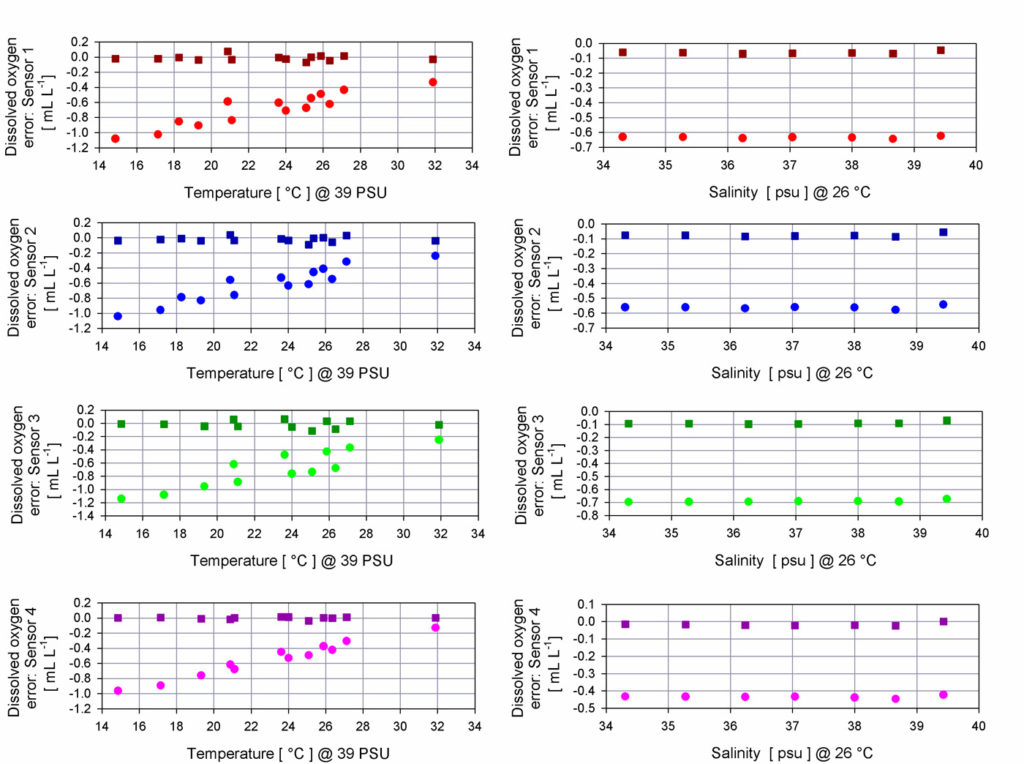 Fig. 2. Offset between dissolved oxygen concentration as measured by reference probes and by the tested sensors before (dot) and after (square) the intercomparison.

Results demonstrate the capability of the new designed chamber of providing a perfectly mixed volume of water in few seconds guarantying very stable and repeatable measurements and the usefulness of the software tool able to dynamically configure each sensor and to log simultaneously analogue and serial data.

The proposed tools could usefully be shared among a network of observatories and applied in laboratories of observing systems located in neighbouring geographic areas.