First interleukin was discovered in 1977 from monocyte and termed as interleukin (IL)-1. Interleukins are the secreted proteins that bind to their specific receptors with leukocytes. They are recognized as a family of cytokines based on sequence homology and their functional properties. Most current information indicates that almost 38 interleukins, including interferon-γ are already discovered. IL-18 is a member of the IL-1 family that is expressed by a range of cell types, including keratinocytes (epithelial cells) and antigen presenting cells such as macrophages, Kupffer cells and dendritic cells. Similar to the receptor for IL-1 molecules, the IL-18 receptor is a complex of a primary IL-18Rα protein that binds IL-18 with low affinity, and an accessory protein IL-18Rβ with high-affinity. We recently found an important role for IL-18 in the generation and maturation of granulocytes including mast cells, eosinophils, neutrophils and basophils from bone marrow precursors (ancestors). 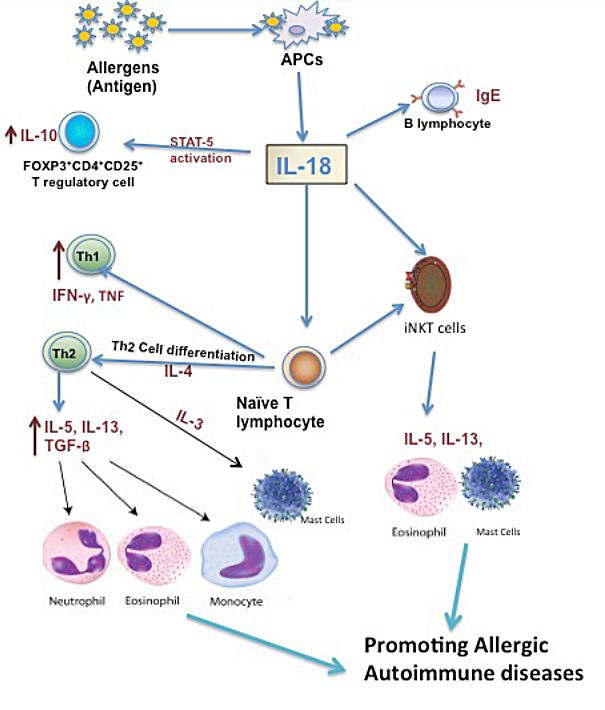 Fig. 1. IL-18 role in innate and adaptive immunity. Diagrammatical representation of IL-18 role in a number of inflammatory cells differentiation and activation that promote autoimmune and allergic diseases. The presented summary indicates that IL-18 is involved in natural killer T cells activation, induces B cell differentiation, and conversion of naïve T cells to Th2 cells and produce Th2 cytokines that promotes autoimmune and allergic diseases.

Bone marrow from naive mice cultured with stem cell factor (SCF) and IL-18 differentiate these inflammatory cells, which are critical in promoting allergic diseases like asthma, colitis, eosinophilic esophagitis, dermatitis, rhinitis including several gastrointestinal disorders. A study of fatal asthma indicated that IL-18 is strongly induced in lung that enhances effector T cells expansion. IL-18 was first described for its ability to induce a Th1 response, resulting in the production of IFN-γ and subsequently inhibiting a Th2 response. It is now appreciated that IL-18 can have opposing effects on the balance of Th1 and Th2 activation and cytokine production. Th1 cells abundantly express IL-18Rα while there is little expression on Th2 cells, and IL-18 can also accelerate but not induce differentiation of Th1 cells. When administered with IL-12, IL-18 stimulates Th1 activity and inhibits IgE production in an IFN-γ dependent manner. When administered alone, IL-18 increases IgE levels independent of IFN-γ. Dendritic cells-derived IL-18 was demonstrated to activate invariant NKT cells that have the capacity to release both Th1 and Th2 cytokines. We earlier showed that direct exposure of IL-18 to iNKT cells in vitro releases eosinophilia-promoting cytokines like IL-4, IL-5 and IL-13, and promotes eosinophilic inflammation in tissues and IL-18 overexpression in tissues promotes pulmonary and gastrointestinal eosinophilic disorders presumably via this iNKT activation.  IL-18 has been linked to increased ECP levels, increases the eosinophil-inducing cytokine IL-5, can induce eotaxin-dependent eosinophilia, and increases IL-8 expression by eosinophils. We showed increased levels of the IL-18 receptor transcript in humans and demonstrated induction of IL-18 and its receptor in a mouse model of eosinophilic esophagitis (EoE). We have also demonstrated correlations between IL-18 and eosinophilia in human EoE patients in addition to the previously mentioned results of iNKT cells. Hypersensitivity allergic reactions are often atopic, or in response to routine allergens and dependent on IgE sensitization, and a few disease states are classically associated with atopic allergy: urticaria, asthma, rhinitis, and dermatitis, as well as the life-threatening acute reaction anaphylaxis. Food and drug hypersensitivities are also common classes of allergy. Anaphylaxis is a life-threatening allergic reaction mediated by mast cells and basophils. Many reserve the term to only describe IgE-dependent mechanisms, but other “anaphylactoid” reactions can be IgG and IgM mediated as well. IL-18 has the ability to increase levels of IgE, IgG, and IgM, and as such IL-18 could play a role in these life-threatening reactions. There is not substantial evidence covering the role of IL-18 in anaphylactic and anaphylactoid reactions. However, IL-18 polymorphisms have been shown to be associated with latex and penicillin allergies Additionally, activation of the NLRP3 inflammasome is known to increase IL-18 and IL-1β processing, and functional NLRP3 polymorphisms are linked to food-induced anaphylaxis. Several reports speculated on the possible therapeutic applications of monoclonal IL-18 antibodies or IL-18 binding protein, the endogenous antagonist of IL-18, to treat autoimmune conditions, boost immune function for chemotherapy. However, given the many dichotomous effects of IL-18, the numbers of unintended consequences from IL-18 blockade still need to be studied.