The glucose sensor is an excellent example of a point-of-care test: patients conduct measurements at home, it is fast, low-cost, and offers easy interpretation of results. There is a growing market to develop similar devices for testing other small organic molecules that are considered disease markers. The recognition element in these tests is normally based on antibodies, which are expensive and relatively unstable. Molecularly Imprinted Polymers (MIPs), or ‘plastic’, antibodies are very similar to natural antibodies, but can overcome these advantages and do not require the use of animals. They are prepared by polymerizing a template complexed with vinylic monomers in the presence of crosslinker monomers. After subsequent removal of the template, a mold is obtained with a pre-determined specificity for the target based on the size, shape, and chemical functionality of the cavities in the polymer.

Fig. 1. An artistic impression of the “pore-blocking” model, with the blue dots representing the template rebinding to a MIP particle.

In this paper, we looked at developing a new polymer-based biosensor for the thermal detection of dopamine. Dopamine is associated with mood disorders; low concentrations can indicate depression, while higher concentrations are associated with schizophrenia. First, a polymer or ‘plastic antibody’ is developed that is very specific for the detection of dopamine and is able to discriminate this from other neurotransmitters with a similar structure, such as serotonin. Second, the polymer particles are mixed with inks and printed onto electrodes. This is a new procedure which leads to very highly reproducible electrodes, minimizes sample preparation time, and we can print up to 100 electrodes per hour. Finally, we evaluate if we can use thermal detection to determine dopamine concentrations in samples. In previous research a “pore-blocking model” was developed, which shows that after binding of neurotransmitters to the MIP layer the heat-flow is blocked in a certain direction (Fig. 1).

This blocking of the heat-flow means an increase in the overall thermal resistance, leading to a measured increase in the temperature of the liquid above the surface. One novel aspect in this work is that we do not look at fixing the heat-flow through the sample but apply a thermal wave instead. This ‘wave’ is equivalent to heating and subsequent cooling of the sample, as shown in Figure 2. 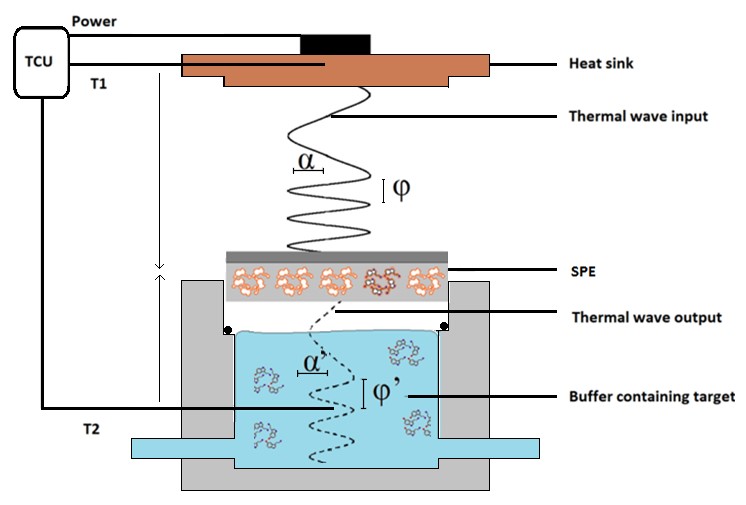 Fig. 2. A thermal wave goes through the screen-printed electrode (SPE) functionalized with MIP particles. The thermal output wave is measured in the fluid and correlated to the neurotransmitter concentration.

The attachment of the dopamine to the MIP layer causes the thermal resistance to rise. As a result, the system will respond slower to changes in temperature. This means that there will be a delay in the phase shift (Φ) of the thermal wave. Dose-response curves are constructed to correlate the dopamine concentration to the delay in the signal. In buffer solutions, the achieved limit of detection (LoD) is down to ~100 nM, which is well within the physiologically relevant range of dopamine. As a proof-of-application of the technology, spiked food samples are measured, showing it is possible to look at complex samples. Advantages of this technique include fast measurement time (<3 min), low-cost of the polymer sample (£1 per chip) and portability of the set up. The developed biosensing platform is generic; by adapting the MIP layer, different targets such as ions, bacteria, and cells can be studied. This makes the developed sensor platform suitable for a wide range of applications, like analyzing rotten food, to measuring bacteria in wastewater, or detecting disease markers for bioanalytical applications. With the portability and low-cost of the method in mind, we are particularly thinking of using the set up in remote areas with limited resources such as in developing countries.