Iron: it is all in the core

Iron, the most abundant element on the Earth’s core, is an essential substance necessary for a number of reactions in the body which lead to the production of necessary  energy allowing optimal function.

Iron deficiency (ID) and iron deficiency anaemia (IDA) are common problems worldwide affecting one in six people throughout the world. IDA, the fourth leading cause of disability, influences a number of diseases such as chronic kidney disease, heart failure, inflammatory bowel disease and cancer with impact on health economics and clinical outcomes.

A number of hormones and proteins tightly control the way iron is used and moved throughout the body (metabolism). Hepcidin is the most important. Figure one summarises this metabolic pathway. 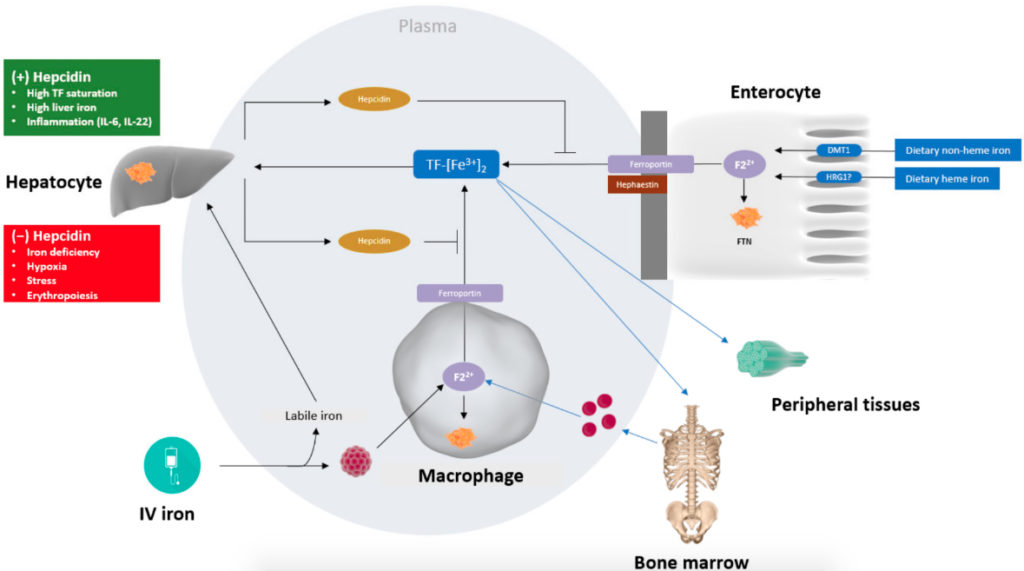 Fig. 1. Iron is transported in the body using transferrin (TF) from intestinal cells (enterocytes), macrophages of the reticuloendothelial system and ferritin (FTN) that exists in macrophages and liver cells (hepatocytes). Iron travels to the plasma through ferroportin (the only iron exporter) which is controlled by the action of hepcidin. Hepcidin both binds to ferroportin but also takes it back in the cell. Hepcidin is released into the bloodstream mainly by hepatocytes. Almost all iron binds to TF – infusion of iron supplements may cause free iron to appear in the plasma.

ID has traditionally been treated with oral supplements. This is limited by  long duration of treatment (> 6 months) and gastrointestinal side-effects including nausea and pain. Previous evidence suggests up to 75% of patients receiving oral iron experience side effects. Current research exists, using nanotechnology, to design new oral formulations with less side-effects.

Iron can be given intravenously. Initial side effects limited its use and were associated to a high degree of “free” iron released into the body and severe allergic reactions (hypersensitivity). Since the 1990s formulations had  much improved safety profiles leading to increased clinical use. Nonetheless these had to be given as slow-rate infusions. This led to the development of new third-generation preparations – ferric carboxymaltose, iron isomaltoside and feromuxytol.

However, iron normally exists in an  inactive form. It is possible that when all, or almost all of the transferrin is loaded with iron, high levels of free active iron remain circulating, contributing to oxidative effects.

The iron-carbohydrate core of newer preparations limits the chance of IgG-mediated hypersensitivity seen with older preparations. However, recent theories suggest the possibility of an IgE mediated pseudo-allergy as a response to the carbohydrate associated with the complex structured core and iron nanoparticles. Nonetheless an extensive review addressed safety differences between intravenous, oral iron and placebo; > 10,000 patients from 103 clinical trials indicated no increase in serious adverse events.

The increased third generation intravenous iron preparation use has highlighted new side-effects, with that of low phosphate in the blood (hypophosphataemia) being the most notable. This appears to be specific to ferric carboxymaltose and related to fibroblast growth factor 23, a hormone associated with various body systems ranging from kidneys, to bone and the heart.

There is wide-ranging evidence from clinical trials and reviews supporting intravenous iron use in chronic kidney disease, heart failure, women’s health (pregnancy and non-pregnancy), inflammatory bowel disease, cancer and peri-operative management. Such studies support the safety and efficacy of intravenous iron and led to the incorporation of intravenous iron into several clinical practice guidelines.

IDA is common and poses a diagnostic and therapeutic dilemma with extension to quality of life, prognosis and health economics. Third-generation iron preparations are characterised by a strong, densely packed iron-carbohydrate core and are able to deliver higher iron doses faster, with an improved safety profile. As their use becomes more widespread, it is important to further characterise these agents and define their differences.