Endothelial cells (ECs) function as the central regulators of blood – tissue communication, controlling the exchange of solutes and immune cells between the vascular and extravascular compartments. In healthy lungs, quiescent ECs express high levels of caveolin-1 (Cav-1), a 22 kDa raft-associated protein required for caveolae formation and the scaffolding of endothelial nitric oxide synthase (eNOS) and other key regulators of vascular tone and adhesivity. eNOS dimers generate low concentrations of nitric oxide (NO) basally required to maintain vascular homeostasis, however, inflammation and injury can elicit adaptive phenotypic changes in ECs leading to loss of Cav-1 expression and reduced NO bioavailability. Reduced NO production and the generation of cytotoxic mediators is thought to be a major contributing factor to acute and chronic vascular diseases such as atherosclerosis, diabetes, hypertension, and acute lung injury/acute respiratory distress syndrome (ALI/ARDS). 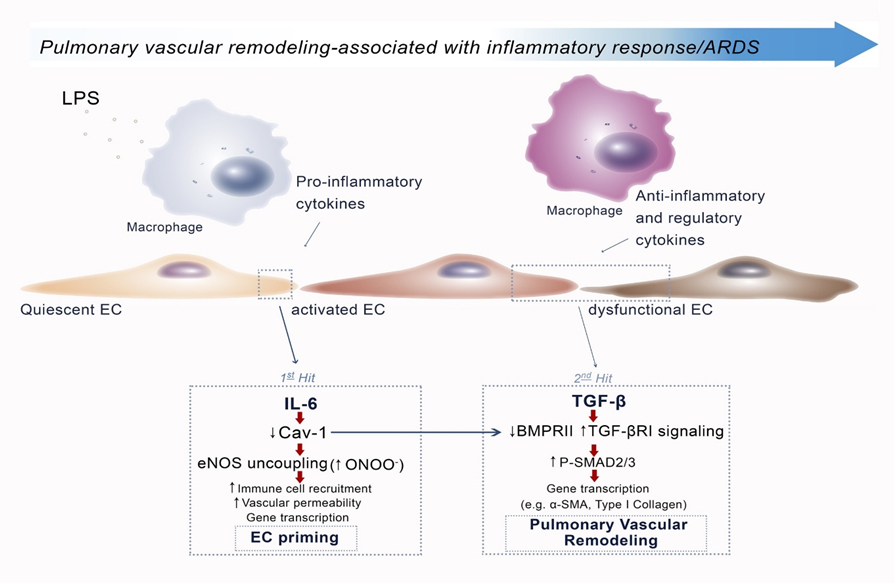 During the acute phase of the inflammatory response, injured ECs undergo apoptosis and/or necrosis, exposing the underlying medial layer of the vessel. Surviving ECs and recruited immune cells may stimulate the release of growth factors such as vascular endothelial growth factor (VEGF) and transforming growth factor-β (TGF-β) to promote cell proliferation and migration after injury, resulting in repair of damaged vasculature and restoration of tissue homeostasis. However, with chronic inflammation, ECs lose their characteristic homeostatic functions and the ability to coordinate physiological vessel repair, contributing to the exacerbation of vascular pathology. In this regard, our recent data suggests that Cav-1 expression is critical for maintaining differentiated EC characteristics and vessel integrity. We and others have observed that ECs lacking Cav-1 expression exhibit a de-differentiated or mesenchymal-like phenotype which impairs their ability to promote an efficient immune response and participate in vascular repair leading to pathologically remodeled vasculature.

We observed that proinflammatory the response-associated with ALI/ARDS significantly reduced the levels of pulmonary EC Cav-1 expression leading to a dysfunctional an endothelial phenotype. This phenotype was characterized mainly by increased expression of eNOS in its monomeric form which is associated with the generateion of peroxynitrite, an oxidant and nitrating species, at the expense of NO. In vitro, treatment of human pulmonary artery ECs with a peroxynitrite donor (SIN-1), altered the typically quiescent EC phenotype and morphology and promoted a phenotype with characteristics of mesenchymal or muscle-like-cells. In vivo, inflammation-induced Cav-1 depletion occurred at the same time that TGFb signaling shifted from protective BMPRII-driven SMAD 1/5/8 signaling to pro-fibrotic TGFβ-RI-driven SMAD 2/3 signaling. In fact, during ALI/ARDS, reduced levels of BMPRII and increased TGF-β dependent activation of phospho-SMAD2/3 was associated with severe vascular injury and remodeling. These observations suggest endothelial Cav-1 depletion may serve as a switch to promote hyperactivation of the reparative immune response. However, the question remains as to how Cav-1 and BMPRII depletion are linked and how this promotes the dysfunctional EC phenotype. Understanding this switch may reveal key molecular mechanisms that can be targeted for developing new therapies that prevent the progression of inflammatory pulmonary vascular diseases.