Inflammatory bowel disease (IBD) is a group of inflammatory conditions that affect the entire gastrointestinal (GI) tract, but mainly the colon and the small intestine. It falls into the category of autoimmune diseases, in which the immune system of the body attacks its own digestive system. Crohn’s Disease (CD) and Ulcerative Colitis (UC) are the two principal types of IBD. CD can affect any part of the GI tract while UC mainly affects the colon and the rectum.  Both types present with abdominal pain, vomiting, diarrhea, rectal bleeding, severe internal cramps and muscle spasms in pelvis, and weight loss. Anemia is the main complication. Bacterial composition of the GI tract, diet, and genetics contribute to this disease. 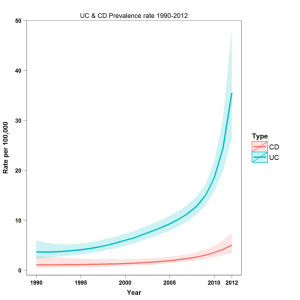 Fig. 1. Prevalence of UC and CD during study period at national level in Iran.

IBD is not medically curable. It is among costly GI diseases and although its mortality is low, its onset during early adulthood and its chronicity as a lifelong disease lead to a significant decline in quality of life for the patients and heavy burden on the health care system with huge cost. According to the Global burden of diseases study, in 2013 over 10 million people across the world were affected by IBD and over 50,000 deaths were attributed to this disease.

IBD was known to be more prevalent in North America and North-West of Europe compared with Asia and Africa. While the incidence and prevalence of IBD are increasing almost in all parts of the world, some recent studies reported decreasing or stabilizing trend of IBD incidence in western countries, in contrast to a considerable increase in IBD prevalence in Asia and Eastern Europe.

IBD in Iran as one of the largest and most populated middle-income countries in the Middle East, seems to have increasing trends. However, national estimates are not available for Iran. Therefore, calculating the national incidence and prevalence of IBD and its burden seems to be an essential step in facing the IBD epidemic in the country. In our recent study, we aimed to evaluate the prevalence and incidence of IBD and its trend in Iran at national and provincial level from 1990 up to 2012. These estimates can help health policy makers for better health planning and providing an opportunity for further research on understanding the risk factors of this disease in Iran. We searched for all available published and unpublished data. We also contacted all gastroenterologists across the country to attain the data of their patients in their clinics. Collectively, we recorded about 11,000 IBD patients in our database, defined by gender and age for 23 years from 1990 to 2012. A total of 9,269 patients had UC, 1,646 had CD, and the rest had rarer types of IBD. A total of 5,452 patients (49.56%) were male. The prevalence of IBD has increased by approximately 10-fold from 1990 to 2012. The prevalence of UC has increased much more than CD (Fig. 1.). IBD was most prevalent in central provinces of Iran (Fig. 2.).

Fig. 2. IBD prevalence at provincial level (per 100,000) in Iran.
*The green end of the spectrum shows lower prevalence and the red end demonstrates higher prevalence.

To put it in a nutshell, the incidence and prevalence of IBD in Iran are growing rapidly in parallel with other developing countries, and it will become a major health challenge in near future. Its prevalence and incidence were similar to Middle Eastern, Central Asian, and East European countries and were less than Eastern Asian, Western European, and Northern American countries. The prevalence and incidence of both UC and CD are increasing and it is expected that CD will surpass UC in forthcoming years. Establishing a national population-based IBD registry seems to be necessary in Iran. Enhancing the awareness of people through mass media can help early diagnosis and control of IBD.