Is retrieval from memory ‘automatic’?

Memory for studied material is impaired if attention is divided between learning the material and performance of a concurrent secondary task. We expected to find a similar trade-off when attention was divided during memory retrieval, but surprisingly several studies have shown that the addition of a secondary task during retrieval results in only slight reductions in memory performance. At first this finding suggested that memory retrieval may be ‘automatic’ and therefore not require attentional resources, but other work has shown that retrieval typically involves substantial processing resources. Also, we have shown that instructions to emphasize either memory retrieval or performance on the concurrent task have large effects on the secondary task but essentially no effect on the number of words remembered. A possible answer to this puzzle was provided by the results of an earlier experiment from Alan Baddeley’s lab that also showed no effect of a secondary task on memory retrieval, but did find that retrieval slowed down under dual-task conditions. Perhaps the trade-off between retrieval and a secondary task is not in terms of the amount retrieved but in terms of retrieval rate. 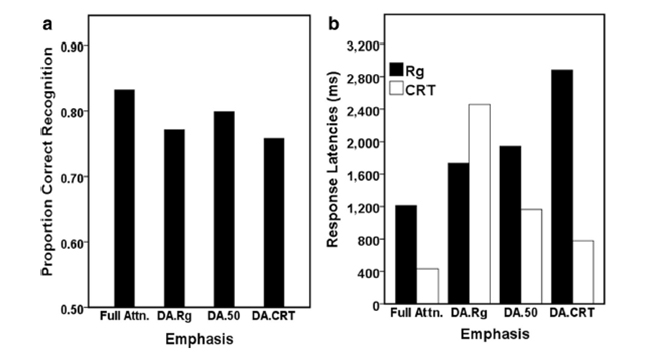 We therefore ran an experiment in which participants studied pairs of unrelated nouns (e.g. wallet-donkey, bishop-anvil) under full attention for a later memory test. In the test, participants were again shown a series of word pairs, either the identical pair studied (e.g. wallet-donkey) or a rearranged pair (e.g. wallet-anvil). The task was to decide as rapidly as possible whether each pair was intact or rearranged by pressing one of two response keys; this response caused the next test pair to appear immediately. Retrieval speed was therefore measured as the average decision time over a series of trials. The concurrent secondary task was a visual continuous reaction-time (CRT) task. This task consisted of 4 adjacent boxes arranged horizontally on a computer screen with a response key directly under each box. An asterisk appeared in one of the boxes, and the task was to press the corresponding key as rapidly as possible. A correct key press caused the asterisk to jump immediately to one of the other 3 boxes at random; the participant must then press the new key rapidly, and so on. Performance was again measured as the average reaction time in each condition. 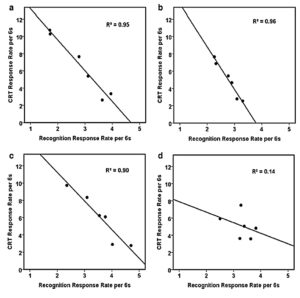 Fig. 2. Response rates (responses per 6-sec period) for the CRT task plotted against response rates for the recognition task. The data are shown for 4 quartiles of participants broken down by overall recognition accuracy (a = 0.94, b = 0.83, c = 0.72, d = 0.61). The data for Groups a, b and c show good fits to linear functions.

Figure 1a shows that recognition accuracy was highest under full attention and dropped non-significantly under divided attention conditions; emphasis variations had no systematic effect, thereby replicating previous studies. Figure 1b shows that response latencies (average recognition or CRT reaction times) were fastest when each task was performed alone, and increased under dual-task conditions. Pair recognition was fastest when recognition was emphasized, was slower for the equal attention condition, and slowest when the CRT task was emphasized. Latencies for the CRT task mirrored this pattern, being fastest when CRT was emphasized and slowest when recognition was emphasized. It therefore seems that participants maintain a high level of memory accuracy when attention is divided at retrieval, but do so at the cost of slower decision times. One possible account of this slowing is that participants continue to gather evidence from each presented pair until some internal criterion of acceptability is reached; when attention is divided the rate of evidence accumulation is slowed showing that this postulated process does require attentional resources. The trade-off between CRT and recognition latencies shown in Figure 1b suggests that these very different tasks rely on one common pool of attentional resources.

A further unexpected finding from our experiment was revealed when we plotted the response rates for recognition decisions (i.e. the number of decisions made in a 6-sec interval) against the response rates for CRT decisions using results from the two replications of the three emphasis conditions as data. Given the reciprocal pattern shown in Figure 1b we expected to find a monotonic negative relation between the two rates, and in fact the data do show a strikingly linear relation. In order to check whether this relationship held for all participants we split the group into four quartiles of 6 participants on the basis of their overall recognition accuracy. The median accuracy rates for participants in quartiles a, b, c and d were 0.94, 0.83, 0.72 and 0.61 respectively, and the functions relating the two response rates for the four quartiles are shown in Figure 2. The data for Groups a, b and c fit linear functions well, but data from the low-performing group (d) clearly depart from linearity. Speculatively, Group d participants were either not motivated to perform the tasks diligently or perhaps had trouble coping with dual-task demands.

In general, the finding that division of attention has little effect on retrieval accuracy but does slow recognition latency shows that memory retrieval is not automatic but does require attentional resources. When such resources are reduced, recognition decisions are slowed in a lawful manner, perhaps illustrating that resources are required for the accrual of evidence relevant to the recognition decision. Finally, the systematic trade-off in response latencies and response rates between the two tasks suggests that the tasks consume attentional resources from one common pool.