Is the post-polio syndrome due to chronic poliovirus infection?

Over the years, poliomyelitis survivors may experience e progressive decline of physical strength accompanied by intolerance to cold, chronic pain and other disabilities. This condition, termed post-polio syndrome (PPS), may lead to the incapacity of living an independent life, generates suffering and considerable social costs. PPS usually arises after many years of partial/complete functional recovery with apparently stable neuromuscular functions. In developed countries, in fact, it is common experience that polio patients had a productive life before starting to experience PPS at the time of retirement. PPS is estimated to affect about 20 million people worldwide. 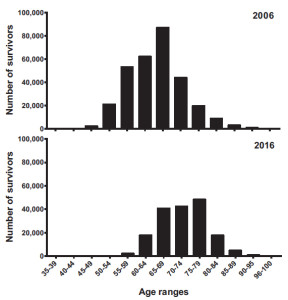 In the article, the estimated epidemiology of PPS is reported together with the pathogenic pathways that could lead, over time, to the progressive loss of neuromuscular functions. When PPS becomes clinically manifest, polio survivors experience new weakness, generalized fatigue, atrophy of previously unaffected muscles, physical decline.

The core message is that PPS can be caused by unapparent chronic low-level infection due to the poliovirus type that, at the time of the initial insult, infected the patient. This conclusion is derived from the study of about 120 PPS patients. Nearly three quarters of them were shown to harbor poliovirus “remnants” (in other words polioviral genomes and low-level virus activity). It is thought that chronic virus infection of the nervous and muscular systems may be responsible of the progressive loss of neural and muscular cells that is accompanied by low-level chronic inflammation.

An important point is that the “poliovirus remnants” detected in PPS patients are not transmitted to family members, thus are not dangerous to the population, nor represent a possible form of resurrection for poliomyelitis. It is thought, but not proven, that the poliovirus forms that remain persistent in polio survivors are “mutated” or “genetically changed” derivatives of the virulent polioviruses that were circulating (before anti-polio vaccines) at the time of polio epidemics.

Fig. 2. Idealized representation of changes in motor units from the time of acute poliovirus attack and the possible development of PPS. Distal degeneration of innervating fibres and loss of motor units accompanies the appearance of new weakness and the atrophy of previously unaffected muscles.

Finally, the need is presented for an effective “cure” of PPS. So far, in fact, anti-inflammatory drugs and other treatments have failed in this field. A possible remedy is seen in the administration of intravenous human immunoglobulins (i.e., antibodies derived from blood donors). This treatment is costly and only temporarily effective. For this reason, the article brings the attention of clinicians and pharma industries to the need of introducing antiviral agents for the treatment of this condition. Several new antiviral compounds are becoming available, and some of them have the potential of blocking the replication and pathogenicity of polioviruses. Treatment of PPS cases with select compounds could ameliorate the life of patients, and could serve as a test for using these same compounds as drugs for new poliovirus epidemics that might emerge in the world.