Suicide prevention researchers are particularly interested in elucidating factors that distinguish those who develop a desire to die by suicide from those who have developed both the desire and possess the capacity to attempt suicide. In the case of Northern Ireland, conflict exposures are increasingly being implicated in the rise in suicide rates among men who grew up during the 1970s. Psychological traumas, resulting from conflict exposures, coupled with a growth in social isolation are speculated to be implicated in this increasing trend.  However, although recent evidence suggests a significant link between conflict exposures and the development of desire for suicide, the evidence linking conflict exposures to deaths by suicide is dubious. We argue that a concrete understanding of the factors associated with suicidal behaviours in NI will remain elusive until the diversity of the conflict exposed population is considered. Specifically, it is known residents in areas of high deprivation were most deeply impacted upon by the conflict and these areas also demonstrate the highest rates of deaths by suicide. These figures clearly suggest that the impact of conflict exposures on mental health and risk for developing suicidality is controlled by other biological, genetic and environmental factors. 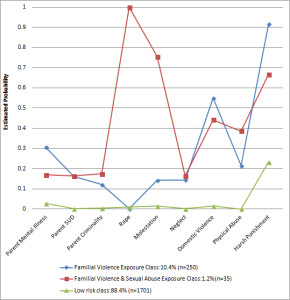 This current study aimed to lay the foundation for developing an evidence based suicide prevention strategy in NI. We began by profiling exposures to child maltreatment in the population. Second those with and without such exposures were compared in terms of their likelihood for exposures to conflict related violence and for enacting suicidal behaviours.

The design of our study was informed by prior international empirical research which had established that the capability to die by suicide is acquired during recurring pain and fear inducing life experiences. During these recurring experiences individuals may (1) become habituated to both fear and pain; (2) lose their adaptive fear of death and (3) lose their natural instinct to preserve their own lives. Furthermore, it has been established that recurring exposures to fear and pain inducing experiences are influenced by genetic sensitivities that apply only to minority subgroups in the population. These genetically sensitive subgroups are therefore at increased risk of trauma exposures which increase risk of: (1) developing mental illness and (2) acquiring the capability to enact suicide. 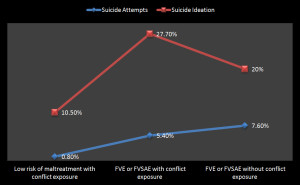 Fig. 2. Rates of suicide ideation and attempts across the maltreatment profiles that were and were not exposed to the civil conflict in NI.

Our findings, based on NI population data, suggest that the capability to enact suicide is strongly associated with membership of two life experience profiles, encompassing 11.6% of the population. These profiles named (1) Family Violence Exposure (FVE;10.4%) and (2) Family Violence and Sexual Abuse Exposure (FVSAE;1.2%) are illustrated in Figure 1. Notably, these profiles were also more likely to have been exposed to violence exposures associated with the civil conflict. Importantly, our findings revealed that the maltreatment profiles but not conflict exposures successfully distinguished ideators from enactors of suicide. These findings are illustrated in Figure 2.

Our findings have important implications for the scaling and targeting of primary and secondary suicide prevention strategies in NI. Primary prevention strategies need to become focused on the prevention of child maltreatment. Secondary prevention strategies need to identify and provide phased and trauma focused interventions that include an evidence based component for treating loneliness in individuals who have been exposed to recurring pain and fear inducing experiences. Implementation of two generation approaches to prevent the intergenerational transmission of trauma exposures within these minority profiles (11.6% of the population) could greatly reduce the transmission of mental illness and acquired capability for suicide in subgroups of the population that possess genetic sensitivities for experiencing recurring fear and pain inducing exposures.