Energy shortage and environmental pollution inspire the exploration of clean, renewable, and non-fossil energy carriers. Hydrogen, as “the world’s cleanest energy” because of its raw materials and products are water, and high energy content per unit mass (120 J g-1), has attracted a great deal of attention as new oil for the future. There are many ways to produce hydrogen, wherein solar-driven photoelectrochemical (PEC) water splitting into hydrogen and oxygen is one of the most favorable options for converting solar energy into a useable energy since both water and sunlight are vastly abundant.

As core unit of a PEC water splitting, photoelectrode materials play an irreplaceable role. Among them, titanium dioxide (TiO2) is the most popular material due to its favorable band-edge positions, superior chemical and optical stability, and low lost. However, the water splitting performance of TiO2 based photoelectrodes is still unsatisfactory due to two fundamental reasons: one is low utilization of light because of the large band gap of TiO2, the other is low photoelectric conversion efficiency because of fast electron-hole recombination. 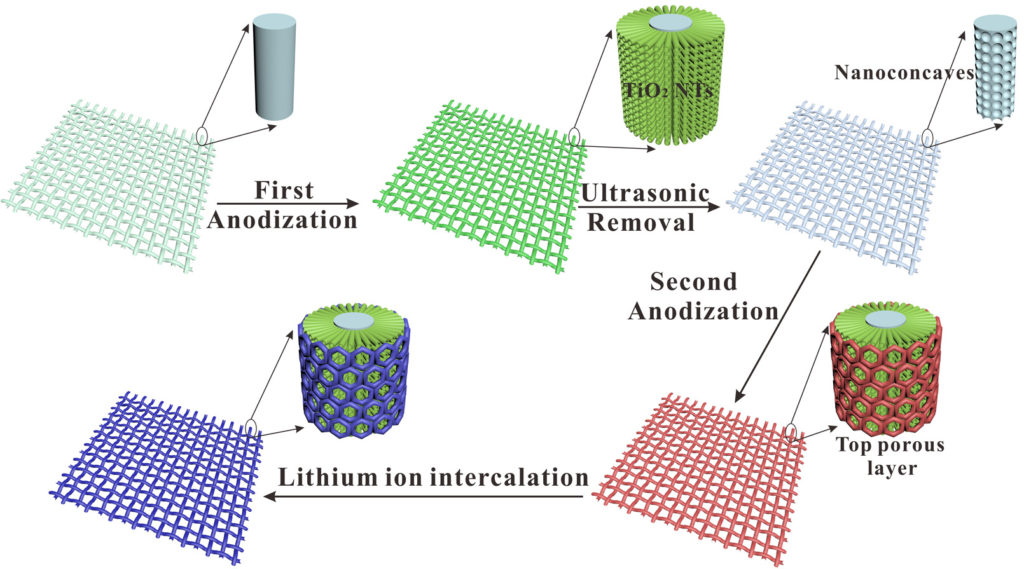 In this work, we intercalated lithium ion into 3-D vertical hierarchical TiO2 nanotubes on titanium mesh to improve the materials’ PEC performances. On the one hand, the TiO2 nanotube arrays (TiO2 NTs) prepared by two-step anodization method on titanium mesh with unique hierarchical top-porous/bottom-tubular structures show clear advantages with good orderliness, large surface area and light trapping ability, and exhibit superior PEC water splitting performances. On the other hand, lithium ion intercalation can improve TiO2 solar light absorption, while fundamental improvement of donor density are believed to be able to effectively separate and transport photo-generated charge carriers. It was found that the Li/TiO2 NTs/mesh sample showed much higher photocurrent density and optimal photoconversion efficiency of 1.11mA cm-2 at 1.23 V vs RHE (the potential often chosen as a metric to evaluate the performance of photoanodes as it corresponds to the water oxidation potential) and 0.57% at 0.67 V vs RHE than 0.57 mA cm-2 at 1.23 V vs RHE and 0.40% at 0.48 V vs RHE on TiO2 NTs/mesh sample respectively under simulated AM 1.5G illumination. In addition, The Li/TiO2 NTs/mesh exhibited a considerably enhanced photo-activity both over UV and visible light region, good stability and increased charge transfer capability.

So the Li+ intercalated hierarchical top-porous/bottom-tubular TiO2 NTs with vertical direction on titanium mesh (Li/TiO2 NTs/mesh) is proposed as an effective photoelectrode for enhancing PEC water splitting performance. We believe the ion intercalation approach would be a general strategy for increasing solar energy conversion efficiency, and thus open up a new way for electronic structure modification with high carrier density of these diverse PEC materials.